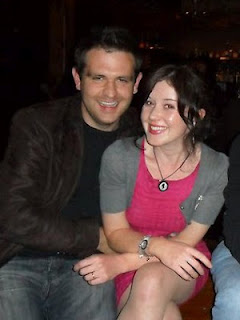 A man allegedly seen wearing a blue hoodie on CCTV footage talking to Melbourne woman Jill Meagher moments before she disappeared has been charged with her rape and murder.
Ms Meagher's body has been found off a dirt road in Gisborne South, about 50km northwest of the Melbourne CBD.
Adrian Ernest Bayley, 41, of Coburg was charged early on Friday morning, almost a week after the Irish-born 29-year-old disappeared while walking the short distance home from a Brunswick bar.
He was arrested at his home at 2.30pm (AEST) on Thursday.
Advertisement
He was charged with rape and murder about 2.30am on Friday and appeared before a brief out-of-sessions court hearing in Melbourne.
Both offences allegedly occurred in Brunswick on Saturday morning.
Bayley was remanded in custody to appear before the Melbourne Magistrates Court on Friday morning.
The breakthrough in the case came after police released CCTV footage showing the last known images of the ABC radio employee as she walked outside a bridal dress shop on Brunswick's Sydney Road - within 450 metres of her home - about 1.40am on Saturday.
In the CCTV footage released on Wednesday, Ms Meagher could be seen speaking with a man in a blue hooded jumper outside the store
Peter Hyatt as Statement Analysis Blog at 2:04 PM

I hope Jill is in a better place and at peace. RIP Jill. I hope justice is fully served, and her family and loved ones can eventually find peace as well. I'm glad the suspect was found so quickly, and this did not have to be dragged out over months or years.

I'm glad she was at least found. So many are out there, their locations known only to God. :-(

I too am glad she was found. What angers me though is that anyone, and that mainly includes her husband, would allow a woman to walk home in the middle of the night alone especially after drinking. No way would my husband stand for that. I don't know if he knew she'd be walking home that night so I can't blame him fully but still, it was a bad area to be in and she was totally vulernable out there.

When I read Homicide Det. Potter's quote "We hold grave concerns for Jill. She hasn't been heard of since Saturday morning and it is now Wednesday." That word "grave" is never good to hear in the context of looking for a missing person. When I saw that CCTV clip with the Hoodie Guy it freaked me out. Gillian's family must be suffering so deeply right now. I can't imagine the depth of their sorrow. May justice be fulfilled. May Gillian's soul be at peace.

I am very glad they have the murderer. I wonder if Jill was his first victim?

OT Peter can you do statement analysis on this Isabel Celis parent interview? The whole idea of what they are doing is heart-stopping to me. I can't even look at their words carefully because the concept is overwhelming.

Forever, I will take a look. PH

I had to stop by with an update! FINALLY a great end to a missing baby. The 3or4 week old baby that was abducted today from my hometown has been found alive!!! I do not know her physical condition. They found her less than 2 hours ago and she is in the hospital being examined. Volunteers that were out walking found her is what is being reported. It appears the abductor(s) panicked and threw her out of the car in the car seat and left her in the ditch. I have not heard if they found the suspect but from what I'm being told there were several witnesses so I pray they find the perpetrator.

Gosh, Jewels! Throwing the baby in a ditch sounds worse than abduction. Is it just me?

What was this woman thinking? Apparently others saw her, described her and her vehicle...but, throwing the baby in the ditch? Whew! Crazy unleashed!

@Tish
Bet this man has been in several fights and more than likely pulverized her.

I saw a photo in which he was bent over, covering his head. He wore three rings. One on his left finger (maybe wedding band), and two on his right. The two on his right made me think he wore those not for decor but as a quasi-set of brass knuckles.

Thick forearms;skinny legs. He pumps iron or works with his hands only.

No one should
fear walking home
alone
in the woods, by a stream, or on the avenue.
No matter the hour.
No matter
the season.

Predators Beware -
You drag your bloody claws across our hearts
and souls
while Justice lies blue
in the shadows
eternally hungry
for a stumble.

It is with a heavy heart that I come to report it was the mother. I don't know who the alleged witnesses were, but there was no abductor. The Mom is 19 and she also has an 11 month old. She has been arrested. She threw the baby in the ditch and reported her abducted. I don't know how long the baby was in the ditch before she reported her missing but it was at least 11 hours from when she was reported missing until she was found. I haven't received an update on the baby's condition yet but she was life flighted to the nearest trauma center.

If you want to keep up, one of the area news sources online is pjstar.com Also http://www.pjstar.com/free/x1238769521/Amber-Alert-issued-in-Toulon-baby-abduction

He apparently has a history of violence and sexual violence.

And here is a picture of him.

If the 2nd link doesn't work try this one, or go to that website and search his name.

Pak31September 27, 2012 11:43 AM said:
"I too am glad she was found. What angers me though is that anyone, and that mainly includes her husband, would allow a woman to walk home in the middle of the night alone especially after drinking."

What angers me more is that women live in a world where they have to fear men raping and killing them, and can't walk safely home alone.

When will we recognize that violence against women is a men's issue? When will men stand up and begin challenging the attitudes of those men who perpetuate disrespect and aggression towards women?

Check out this article: http://www.rhrealitycheck.org/blog/2008/06/02/jackson-katz-violence-against-women-is-a-mens-issue

I agree Tish. Analysis shows sensitivity regarding their marriage.

A horrible ending for this beautiful 29 year old woman. I hope she is at rest now and in a better place. I did look to the facebook page that her husband created and then linked over to her personal page. Jill has many pictures on her page from their wedding and other activities. Such a sad feeling looking at those pictures now. She had so much ahead of her in life.

Her poor family must be a mess. Especially with her dad just recovering from a stroke. Prayers for the family.

Anonymous 6:30pm. You are a broken record. You don't understand statement analysis and yet you come here to whine about the injustice that you perceive.

How about if you don't like what you read here and it's not for you, you find another place to haunt.. err visit. No one forces you to read what is written. You are making a conscious choice to upset yourself.

I'm wondering something - is it not completely possible for Jill and her husband to have had concerns in their relationship, which would be picked up on in statement analysis - but that the husband still have not a thing to do with her murder (such as hiring a hit man)? I don't think you can always conclude involvement by someone in a case like this.

You know, I've been thinking, if the husband had made the statement, 'I don't like her going out at nite alone. I always tell her it's not safe, but she won't listen.' Then he would have been disparaging the victim, or blaming her for what happened. That would have made him look more guilty. But I can see him thinking it, I would have.

Sorry Daisy. My post should have been directed to Pak31, not you.

Thanks for the link! I just read the interview and I am so saddened, I just don't get these parents?!?!? I can't imagine why they would change anything about her room as that was a part of there memories, they have no memories in this new room?!? To cover evidence maybe?!? So frustrated I pray for justice to come upon whomever is responsible for this precious little girls disappearance!