Hailey Dunn's Death and The Lies That Continue 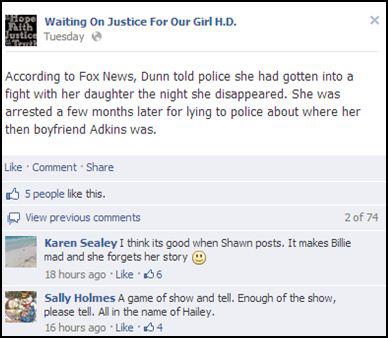 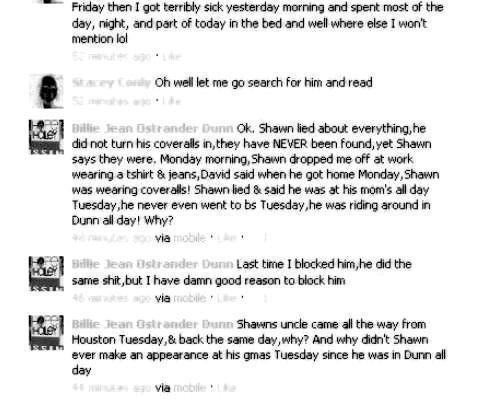 There is a part of this SS missing, BD stated also that Shawn told her he had seen his uncle kill someone before!

Apologies for the OT this is a major
news story in the UK.

Max Clifford was held at a central London police station

Email
Max Clifford says allegations against him are "damaging and totally untrue" during a statement outside a London police station.

The 69-year-old publicist was arrested earlier on suspicion of sex offences and questioned at the police station in Belgravia.

Speaking outside the station, he said the allegations date back to 1977.

He said: "These allegations are damaging, and totally untrue.

"On a personal level they are very distressing for myself, my wife, my family and loved ones.

"Anyone who really knew me all those years ago and those who have known me since would have no doubt that I would never act in the way I have today been accused."

The PR guru is the fifth person to be arrested by police investigating the Jimmy Savile sex abuse scandal.

Mr Clifford's lawyer, Charlotte Harris, said he would assist the police "as best he can with their enquiries".

A Met spokesman said: "The individual (held today) falls under the strand of the investigation we have termed 'others'.

"We are not prepared to discuss further."

Gary Glitter, comedian Freddie Starr, DJ Dave Lee Travis and a man in his 70s, reported to be former television producer Wilfred De'Ath, have been arrested and bailed as part of the probe.

Last month Scotland Yard said it was dealing with about 450 potential victims, the vast majority of whom claimed they had fallen prey to Savile.

ANON 4:25pm
Do you care to share that post by Cut/Paste by chance? I just can't believe it!

Yes, looks like the lies are catching up. Now the FBI is taking the lead we may get somewhere

Billie sure spends alot of time on facebook. Instead of getting her butt out there and finding her daughter.

Dont get me wrong, I belive shes involved in her demise, but still just amazes me how there are still those that support her. I dont get how you can see this mom spend more time insulting people on facebook than being focused on her daughter.

Since we can't believe a word she says and since she is mad at Shawn I don't put much stock in the change in her story. But I sure hope she and Shawn are questioned about this new story. And the person who supposedly drove her to work, Shawn's mother and Shawn's Uncle. Surely this has all been covered by LE questioning before?

Loulou-
You are not confused. She changed her story.

So, either Hailey vanished the night before, sometime after David left the house or she went to clint's came home stayed, billie had a fight and then Hailey vanished, putting the whole timeline they have been telling us out by 24 hrs.

And what about the coveralls story? Easy enough to check that out with his former employer. Everything Billie says here can be verfied or discredited by these parties.

Peter
and other Statement Analysts,
Is it possible to analyze these 2 Facebook statements of Billie's?

I hope the FBI follows up on these comments..

I still wonder if Billie filled out the missing person report that day with a description of what Hailey was wearing when she hadn't spoke to Shawn yet and had not seen Hailey leave the previous day to know what she was wearing.

Billie Dunn Yes,two pair. He was not wearing either when he picked me up Monday though,sometimes he wore jeans & t-shirt to work & no le never asked for those

"not wearing either" reported in the negative and she does not report what he was wearing. She says "sometimes" he wore jeans & t-shirt but does not tell us that he was wearing jeans and t-shirt when he picked her up that day.

I really hope they are finally going down. If the uncle came to town and if Shawn had incriminating information on him, who better to call to help you cover up your own crime.

Ok Billie, we hear u loud and clear...the coveralls. How many times has she brought up the coveralls?! Now she also introduces what SHE was wearing when she was dropped off at work by SHAWN?! (I thought he was on his way to work [to drop off his coveralls] and she had no idea anything was going on with his job until after Hailey was reported missing)

Purely speculating I think BILLIE disposed of the coveralls, quite possibly in the biohazard receptacles at her job. Before starting my family I worked as a lab tech and anyone who has worked around biohazard materials (Billie would have had safety training working at a hospital) would know that any and everything which has come into contact with biological material must be placed into the biohazard containers, including specimen bags, collection cups, used disposable gowns, soiled paper towels, etc. Once the containers are full they are sealed and a bar code used for processing and pickup by the disposal service is placed on the box after which point it cannot be reopened by law. The containers are picked up by a certified disposal service and incinerated.

My point being that the bigger containers would be a perfect place for her to dispose of the coveralls, there would be plenty of stuff to disguise or bury them and blood soiled items are expected to be in there so they wouldn't raise any alarm at a glance, a hospital would either have a daily pick-up by the disposal service or may even be incinerating their own waste so she would know they coveralls WILL never be found. Just a theory

You could be onto something there, Jen.

Billie was the first to comment on the overalls. She seemed to need to insert that information into her story to cover what happened to his overalls.

Billie said she washed the coveralls the night before. She then says Shawn turned them in but who did he turn them in to as he apparently spoke to no one? If he threw them in a bin with other coveralls to be cleaned by the company, why would Billie have bothered to wash them at home? I don't know that a regular wash machine would handle a heavy pair of coveralls much less two pair. And if the company provided cleaning service, why would she wash them herself?
Those coveralls are definitely sensitive to Billie!

What in the world! LE never asked for the coveralls! Come on, how could they not have followed up on the coverall issue, confirmation of Billie's ride to work, Shawn supposedly being at his mother's house? Surely they interviewed everyone in involved that day to verify Shawn and Billie's actions and whereabouts. Billie has to be making this up. LE could not have missed all that.

Has LE ever told us about the coveralls? I don't remember anything. Of course, they looked into them, they just didn't tell us anything. I think.

Has LE ever said who took Billie to work? I don't remember either, but Billie & Shawn told us that.

Hailey went missing on Monday and Shawn was said to be at his mom's that day in the affidavits.

Tuesday is the day Hailey was reported missing. Shawn quit work Monday, so what did he do all day on Tuesday, the day after quitting work? He wasn't at work. That is the day Billie is talking about.

Shawn was suppose to be at his mothers house Tuesday also, she did not get her words mixed up IMO.

Or days mixed up I meant. Tuesday is the day he supposedly told his mother that hailey was missing around noon, which never made any sense either.

After 2 years she should know if Shawn took her to work the day David had to break into his own house and caught him looking like a deer in the headlights. Now we learn he was also wearing his coveralls when he was looking like a deer in the headlights too. If he turned them in Monday why did he have them on?? He said he turned them in so what coveralls were these? And what would he be doing to need coveralls on. It surely wasn't working on that house!

The cops probably know about the coveralls so long as David told them. If he didn't it would be disgusting for Billie to have her son lie for her poa. But then again David was playing video games instead of searching for his sister, so maybe it wasn't a big deal to him to lie.

I am trying to wrap my head around David not searching instead playing video games. Did he think Hailey had run away and would be better off? Did she tell him where she was going? All the 2 plus 2s add up to Shawn and Billie killing her and disposing her body. But David may not have thought that in the early days. So what was he thinking and what does he think now? And where does he live now?

David is living in Austin with Billie

the police are lead around by their noses by these ppl- who knows if its low intellegence, lack of education, poor training, or this is their second career and they are just not that into it...regardless they are ineffective.