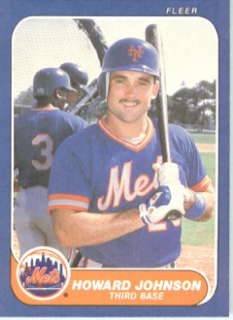 Did  Howard Johnson, in the late 1980's found a sudden surge of power by adding cork to his bat, making it lighter, increasing his bat speed?  This is what he was accused of doing.

People do not like to lie, so listen carefully to what they say.


DRIVING 'EM BATTY : Howard Johnson Has Opposition Checking for Cork, but He's Toast of the Mets

Before proceeding, let's examine Howard Johnson's bat for irregularities. Why not? Almost everyone else has taken a look this season.
It looks just like any other bat, a turned slab of white ash with a blue ring painted near the knob and hardly enough pine tar applied to be noticeable. There are no distinguishing marks or suspicious deformities that suggest tampering.

Without the benefit of X-ray equipment, this cursory inspection will have to do. But it also should be noted that Johnson stores his bats in his locker, not in a wine cellar.
"Look at it," Johnson said one recent day in the Shea Stadium clubhouse. "There's nothing."
Look at nothing?  There's nothing to look at.  "Nothing" is an interesting word. Recall the love lessons of, "nothing happened!" knowing that "nothing" cannot take place.
Still, some around the National League have accused Johnson, the New York Mets' third baseman who surprisingly has hit 34 home runs and driven in 89 runs this season, of using illegal bats. They claim he has inserted cork (domestic or imported?) into the barrel to increase the distance on his hits.
Three times this season, opposing managers have asked umpires to confiscate Johnson's bat after he had hit a home run. Three times, the X-rays and inspection have showed nothing but wood.
Whitey Herzog, the St. Louis Cardinal manager, swears that a bat covertly taken out of the Met clubhouse by his operatives in July indicated an illicit substance. But he has never produced the bat.
In the wake of the Johnson hysteria, Commissioner Peter Ueberroth issued a mandate that managers may have the umpires impound one opposing player's bat each game.
They haven't caught Johnson, but Houston's Billy Hatcher was ejected Tuesday night for using a corked bat. Hatcher, though, was exposed when his bat broke. It wasn't confiscated.
The crackdown has not fazed Johnson, who will pleasantly deny corking his bat to anyone who asks. He just makes sure he keeps a large supply of bats around.
If journalists would only use quotes!
The hysteria may be fading, though. Johnson, 26, now has hit three straight home runs over the last two weeks without temporarily losing the bat in the process.
He will start a three-game series against the Dodgers tonight at Dodger Stadium just one home run away from Rip Collins' league record for most home runs in a season by a switch-hitter. He needs only three stolen bases to become only the eighth player--several have done it more than once--to hit 30 home runs and steal 30 bases.
"I expect the talk, and it really doesn't bother me that much," Johnson said. "In a way, it's a compliment. No one questions  Mattingly anymore or a guy like Andre Dawson, but they will a guy who all of a sudden starts hitting."
Note that he avoids issuing a denial.  Note that it doesn't "really" bother him "that much"; indicating sensitivity.  It is a compliment, he says, but only "in a way."

Still, something has to account for Johnson's startling transformation from just another guy to a power hitter in the class of Dawson, Eric Davis and Jack Clark.
Several theories are available. All are legal, if somewhat unconventional:
THE PUMPING-IRON THEORY Instead of spending a leisurely off-season savoring the Mets' World Series triumph, Johnson went about trying to improve his hitting, in hopes of finding a full-time job at third base, either with the Mets or another interested team.
Johnson chose an extensive weight program. Already a compact 5 feet 10 inches and 175 pounds, Johnson specifically worked on building his biceps and shoulders.
Will the weight lifting be what Johnson assigns?
"I think the weights are the pretty good explanation for my power," Johnson said. "It was mostly free weights, using my hands, forearms and shoulders. You need a quick bat."
Note that he only "thinks" the weights are, not "good" but "pretty good" as an explanation.  Note that "you" need a quick bat; not him.  He had one (a quick bat) in the corked bat.
THE HITTING-TEE THEORY One of the raps against Johnson, both in Detroit in his first three seasons and the last two in New York, was that he could not hit left-handed pitching, or breaking balls from either side of the plate.
Johnson admits to being considerably weaker as a right-handed hitter. So, again, he spent the winter working on it. He spent hours whacking balls on a batting tee from the right side of the plate.
"I think that rap was pretty accurate," Johnson said. "It's just because I hadn't hit much against left-handers. I was much better left-handed. So, I worked at the batting tee quite often.
"I took so many swings from that side that it became natural after a while. There was a mental block there before, because I didn't feel the confidence."
THE ICED-TEA THEORY As soon as notoriety finds you, people recognize and publicize any eccentricity.
Johnson's is an acute passion for drinking iced tea before and during games. One report said that he downs two gallons a game.
Said teammate Tim Teufel in a recent Sports Illustrated story: "HoJo's so hooked to tea that his next sport may be cricket."
THE VISUAL-AID THEORY Dr. Glenn Seifert, an optometrist who works with several sports teams, set up an off-season program to improve Johnson's reaction time, hand-eye coordination and peripheral vision.
Using a computerized machine in which lights flash in different patterns, Johnson tried to touch the lights as quickly and accurately as possible.

All I’ve ever said is that when they X-rayed my bats, they came up clean,” HoJo.
This is still to avoid a reliable denial.

Did he have any special friends? ”I know a few good carpenters, yeah,” Johnson said, smiling broadly.

“I do know that HoJo was corking his bat,” [Keith] Hernandez said on TV during Game 1 of the Mets-Brewers doubleheader. “His father corked his bats for him. . . . Howard did it kind of later in his career.”
Asked by broadcast partner Howie Rose how he knew Johnson broke the rules, Hernandez replied, “Howard told me. He can’t keep his mouth shut!”

OT - Are you all happy now? Nancy Grace is a bully yet you talk about her on this site like shes a hero. Well, how about you analyse her contribution to a suicide.

Nancy Grace has been criticized here for her glaring misses (Ron Cummings comes quickly to mind) as well as commended for her occasional moments of clarity and brilliance. Her interviews of Billie Jean Dunn offered a goldmine of information and were painstakingly analyzed on this site. I've read the majority of all the articles written on this site as well as the previous site and Nancy Grace is criticized far more for her interviewing techniques (the bullying, poor listening skills, rudeness, talking too much, asking compound questions, interrupting an answer to name a few) than she is ever praised. I'm surprised by your conclusion that she is seen as a revered hero here.


You all leave my Nancy Grace alone!

It's all judicially tinged theater and entertainment. All the regular contributors have learned they might be next, the crime proponents get stuck in the rapid fire bullying, and we get lots of samples.

Back to the topic:
Hard to believe that this man who played for so many years did not once have at least one of the truck-fulls of bats that major league players use throughout the playing season confiscated and dissected. Not logical. Doesn't mean it didn't happen, but...
And if he's the kind of guy who likes to tease people, he might allow the rumors to flourish, but, then, again,....