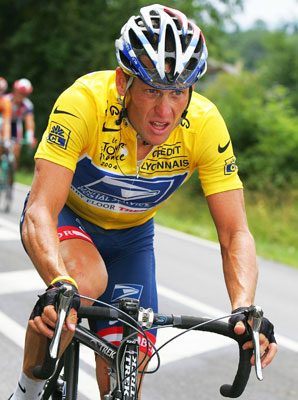 His use of the word "never" rather than use a reliable denial.
His use of passive language.

Regarding his destruction of Emma O'Reilly:  "She is one of these people who got run over. "

Passivity is used to conceal identity or responsibility.  Armstrong used passivity in abundance.

She did not get "run over" by a non-entity:  she got run over by Armstrong.  He sued her in court.  He owes her far more than an apology.

He is capable of destroying anyone who gets in his way.  He is dangerous.

He did not issue a reliable denial about pressuring his team mates into doping.  He used the word "never" repeatedly; just as he has in the years of denial.

He avoided answering the question about Betsy Andrieu because of law suit.

He would take the "fall" which was another way of avoiding answering a question.

Would be interesting to see if the singer Sheryl Crow ever said anything about his doping. She was with him long enough to see the sociopathy.

I was wondering about that myself, sidewalk super.

Here's a rather scathing commentary on the Oprah interview. The author clearly wasn't fooled:

i watched parts of it since it was on late here.

I noted a lot of pauses and self touching as he thought through each answer.
There were multiple tiny smiles and smirks when he was asked a question ( watch the corners of his mouth) regarding others or how he did what he did.
He wasn't in the least bit remorseful, he was proud of what h had done and the damage ge had caused to others.
There were few reliable denials and an awful lot of nevers and absolutely nots, there were a fair few clustered around 2005 so what was happening then that he wants to conceal?

This wasn't him coming clean to clean the slate, this was a public exercise in conning the authorities, the media and the public that he is a changed guy.

What really annoyed me is oprah (has been) was asking compound questions and finishing his answers for him.
There was one question i can't recall off hand which one where she picked up on a single keyword in his evasive answer and asked him directly what he meant by the word,which i think surprised him.

I will bet he is still doping or going to dope since with the bio passports he cannot afford to stop doping have a passport and then commence doping.
His bio passport, should he ever return, will have to reflect as normal for him with doping.

he came over as conceited and smug, he is proud he conned everyone and his will to succeed is that he will continue to do so, 2nd best is never going to be enough

Sidewalk, I don't know if Sheryl has any room to talk, wasn't she was the one who wanted to limit the number of squares of toilet paper we could use?
I always thought LA dumped her, because he didnt' want her to touch him after that.

The interview. All that my brain could handle, was mins of listening to LA.

Flipping back and forth, from a show to the interview. I could not watch it constant. 5,8 mins was all I could watch.

LA gave Cindy Anthony a run for her mouth. He to say in response to O, absolutely too many times to count.

O asked him point blank have you failed a drug test ?

Previous, second earlier, was a clip of a man who stated, LA's urine, a number of samples were taken from him, and frozen. They were from 1999, and tested for enhancement performance drugs in 2005 or 2008. All tested positive, as in he failed.

She asks have you ever failed a drug test? he answers: Never.

She reiterates the URINE and he says..paraphrased "that was a retroactive failure, I did not fail the tests when my urine was taken"

He did not fail, it was a retroactive fail as it was tested years later. I stopped there.

--
Game Over. Will not watch part 2
Too painful as it is all circle talk. Liar's duet, he lying to himself within this interview. O, in her face she showed, shards of, Man you are good. She picking up on his semantics, LA has his own language, he created and controls very well.

I actually think Lance is acutely aware of his continued arrogance, which is preventing him from feeling remorse. He can say the words that he is "flawed" and deserved other's wrath, but he does not yet feel ownership or responsibility of those actions because they are still justifiable in his mind.
So, Lance cheated to beat the rest of the cheaters.....He didn't corrupt the Sport - he Exposed it by his brash arrogance and 'Dare to Challenge me' attitude.
Looking back to his repeated denials, while not "Reliable" were accurate and believable to him and his close supporters simply because of semantics in the way the questions were asked AND in the way the responses were delivered.

A retro active failure? That's a new one to me !

I can't bring myself to watch the interviews. I'm enjoying reading the comments here. Thank you to all who have shared!

He is an arrogant prick - his own words, he to revel of who he was then.

O to say to him, of enhancement drugs - if your a jerk, upon using, then you become a bigger jerk.. she then to add the word humanitarian, as when one finds their works aiding, they to vest more, and further their works to continue to help others in need, etc..

He to respond, I don't know if you pulled those two words out of the air, I am both, I was a jerk who became a humanitarian. (paraphrased) (puke)

People do not change. At their core they are who they are. Human nature repeats. His ego is so self contained, his world is so small, bolstered upon his core, his true self. He to grow it, not manifest it, to find it as his way of controlling everyone around him.
His ego, his display, thrives in ID.

The id is unconscious by definition: "It is the dark, inaccessible part of our personality, what little we know of it we have learned from our study of the Dreamwork and of the construction of neurotic symptoms, and most of that is of a negative character and can be described only as a contrast to the ego. We approach the id with analogies: we call it a chaos, a cauldron full of seething excitations. It is filled with energy reaching it from the instincts, but it has no organization, produces no collective will, but only a striving to bring about the satisfaction of the instinctual needs subject to the observance of the pleasure principle."[6]
---
He says it, I was ruthless, the shear drive to win, kept me going, he to not survive but to WIN. His cycling career, his cancer, his philanthropy. He is ruthless. Not was, his core is who he is. Think of him HIGH, his ego to soar upon these drugs. Who would be his competition? himself sober.

He stated the blood doping happened days prior to a competition, race. Therefore it was not used, not to be implicated as a players advantage. He believes this? no he made it believable. The testing then not able to detect, was not available. Nothing found in my blood nor urine, I passed all tests, flying colors.

Watching him last night, brought me back to a comedy skit, 70's Bill Cosby. Bill Cosby " Himself".
He talking about people who use recreational drugs as an outlet. Work hard, M-F, Friday night comes and it's time to party. He to say Cocaine, and the audience to go wild. He says of the drug, it is said, that cocaine is to enhance ones personality.. he to give his infamous Cosby chin down, eye roll. Audience again wild, this 1970's,.. he to stare out the audience, brow furrowed, he straight faced,...

What if you are an axxhole?
-
Hello LA - You are who you are, and your drugs of choice did " Enhance" who you are. His owned descriptive words, himself, now sober (?)I am a ruthless arrogant prick. People tell you who they are, yes they do. It's upon if you're listening to what they tell you, that you find their words said, truth or dare. His truth where he says it or not is irrelevant. He does not identify himself as a liar, how then can be profess any wrong doing.

I stared at him, his body language, his face, and it escaped me that he is a father. A father of 5 innocents. How proud he must be to go on National TV at his children's expense, which is the bottom line. They to be type cast of his shadow, for the rest of their lives. He is Sick. Win at all costs, his legacy left for his children, to attempt to survive. Not his concern.

His excessive use of passive language hurts my head.

Lance came across as trying to say what he thinks people wanted to hear. Scary. He probably will fool some but not many. Scarier. He is in no way a changed man looking to right his wrongs. Scariest.

His interview reminded me of the way Ted Bundy would come across. Ted needed to be in control. lance comes across as trying to control. He appears to be so full of himself and the thought of going through the rest of his life shunned by others is killing him. He holds the world in contempt. The same world he wants worship from. Ironic.

Do you know what it means when Lance puts judgements on himself for his answers? I'm referring to the scary, scarier, scariest responses. My guess is it's in some way manipulative.

LA said "All those people who were betrayed. They got lied to."

Dear Lord, this man is incapable of taking possession of any of his actions. He may as well have said, THEY were stupid enough to believe me, not my problem. There isn't one ounce of remorse or even recognition of his wrongs. It was all scripted. Disingenuous doesn't even begin to touch what is wrong with this human being. His spirit is lost.