The Nazis were masters of deception, including using cinema and photo ops.  We have covered their transcripts from Nuremberg and seen the avoidance of answers (sensitivity indictors) as well as their ability to spin stories.

When Poland was first invaded by Hitler in the west, and Stalin in the east, most Germans were told that Poland had attacked Germany, when it was actually a set up based upon a prearranged agreement between Germany and the US Ally, Soviet Union.

Not all deception is via words.

Generally, such photos are said to be "transparent" and "cheap propaganda." 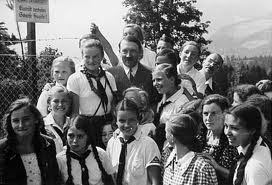 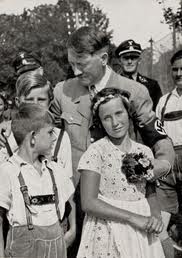 Peter Hyatt as Statement Analysis Blog at 11:08 AM

Hopefully, if the claims are true that Obama is the puppet child for the NWO, Texas will step up and save us all :)

On a serious note: I have never seen these photos before, very chilling to see him embrace the very likes of those he soon after detroyed.

I don't think anything that will be done affects children at all. It's all smoke and mirrors (all sides of politics are guilty of this).

People should be smarter than to be manipulated by emotion, or greed..but they are not. Our family often discusses the idea that those receiving government funds or services should not vote. Including those employed therein, as the result is self serving. Not who will do the best job (whatever that is), but who will keep the checks coming..

The government has one job, to keep it's self in power.

We all remember the images of children with saddam hussein

and the creepy mormon dude..
If you 'love kids', you must be a good person..

Just before the election there was a story released on Obama loving kids, telling a mom she did a great job, when kissing her infant. That grew into he is a president who cares about breastfeeding. Silly..

"children used as political theatre "
As the NRA uses the President's children in their latest ad.

I think that Republicans do not like that President Obama has learned to play their game every bit as well as them.

"those receiving government funds or services should not vote"

No one in your family attends a public school? No one in your family drives on an interstate or crosses a bridge? Receives vaccinations that were researched with government funding? Protected by city, county, state, federal police? Buys meat and produce that was checked and graded by the government? On and on and on...

Your statement is ludicrous and you are teaching your children intolerance for others.

Most of our family does not get our income from the government. Those who do, should not vote. Services was an incorrect term, income would be better (though some services amount to income..)

I will add that you have no knowledge about my family, what we teach, what our circumstances or experiences are, and cannot reasonably make such a statement.

I do have knowledge because you put it on a blog. I then answered to it (see above).

I defer to your omnipotent knowledge of our family..read back a few tears, and I might find that believable.

I can extrapolate from your posting that you teach your children that they are stupid when they disagree with you, and intolerant for having an opinion. Poor kids..

Often times my emotions make it difficult to stay with what is said in SA, but one thing I have learned to trust is that "ick" feeling. Even though I can't always verbalize what it means, I know that when it is there something is wrong. These photos gave me that feeling.

I simply judged what you said in your post. You have also added to it by saying anyone who gets an income from the the government should not vote. My judgement on that statement is that it is ludicrous. That would leave out state highway crew, social workers, scientists, clerical, law enforcement, and too many to list.

Furthermore, I find that intolerant of people making an honest living and teaching your children such. Again, my judgement of it.

As for my kids...you extrapolated wrong. :) Each one of my kids are self confident, successful, loving adults. They didn't get that way because I made them feel stupid when they disagreed.

Politicians are masters of using fabrications and half truths to sway voters.

Children have always been effective objects for evoking feelings of goodness towards politicians.

"The children are our future. We need to protect them." (this new tax initiative, gun law, lottery, agency, senator, president,...etc. will protect them so let your vote count on us to do that).

We know that you are stupid and can't protect your children on your own.

Isn't ironic that a monster like Hitler sent children to concentration camps and made millions of them orphans because he was able to deceive so effectively?

This is why we need to know when people are lying. To protect ourselves from being led down a path of destruction.

"They didn't get that way because I made them feel stupid."

Anything in the negative is sensitive.

Good for you sus!....
Dadgum...sorry that was an ignorant statement. Imo

All U.S. citizens need to stand up together for our rights given to us in our Constitution. You may not care about the right to own guns, but what happens when the next right they want to take away is one you hold dear? Will you want others to turn their backs on you or stand with you to protect ALL our rights? Give the government an inch and they will take a mile!

Repeat of what dadgum said.

"Because I made them feel stupid when they disagreed."

This is why we need to know when people are lying. To protect ourselves from being led down a path of destruction."
_________

Interesting my use of 'family' was interpreted as 'children'. Children were not spoken of. Yet, how the subject would influence children and affect them as adults became the focus.

Are you saying you want Texas to take him out? W

Haha, you tool. You're family are a bunch of elitists who don't get to make those lofty decisions. Understand this, you're a few paychecks and one layoff away from losing everything too. Have some humility fbefore God allows you to learn it the hard way. ALL of us learn humility in this life. You will too. Humility and charity. No one cares what your parroting children feel. Great political minds. Ha!

Peter when you have people making vague wishes/threats against Obama through your website you are really crossing the line by allowing it.

This shot reminds me of Obama using the kids in his latest photo op for gun control.

Funny Obama was a teacher for a short time. I was just reading something about untrustworthy teachers and what makes them untrustworthy:3 things, incompetence, negligence, and ill will. Astoundlingly Obama possesses all three.

Negligence: Benghazi, which will never be forgotten by us

Incompetence: Failure to make a budget, failure to lead on this problem, failure on his middle east policy

Ill will: toward christians, conservatives, and the republican party

Obama is untrustworthy. He is a narcisssist.

Anon @ 1007: It's called sarcasm, but since you feel the need to bash Peter in regards to my sarcasm, here you go:

I don't think Texas should take Obama out.

My statement came from the recent petition by Texas to succeed from the U.S., following the election of Obama.

I don't think Obama is the puppet child for NWO, but I do hear this often.

I was being sarcastic, Anon. No "vague wishes/threats". There, now don't you feel better for saving the President?

Mouse 74, you are so very angry! I asked you if you were joking. However, it is not a matter of saving the president. I was not concerned you had plans to harm him though you are very angry for someone who was not combatively challenged on a blog. However, making jokes or sarcasm about harming the president is illegal just as joking about bombs in the airport would get you some time with the TSA. It's common sense not to put yourself on a public forum no less into that position and it puts Peter in a bad spot too. I'm not sure why caution didn't overtake you. That's one of the things free speech does not cover. Getting mad at me for pointing that out is self defeating...it doesn't change anything. I am not sure why you are so very angry about that, but I recognize that it's misdirected anger. We are all angry about something economically or politically speaking and many of us feel disenfranchised. Some of us write letters or start petitions, others let off steam on blogs. Attacking me may make you feel better but my statement is neutral and so this attack is unwarranted. You have to be careful what you write or say. Fact.

That's an untenable argument...there is no reason why that should invalidate their right to vote. That'd be as silly as saying people who haven't gone to college aren't capable of being informed enough to vote. You can't retract rights from people as if they are prisoners for irrational, random reasons. Do you understand what democracy is? Of the people, for the people, by the people. That's like saying, Humanism---it's not for everyone.

Perhaps you should send that wiki passage to Maureen Dowd from the NYT who compared Paul Ryan to the Taliban.

Or Bob Schieffer from CBS who compared President Obama taking on the gun lobby to America defeating the Nazis in World War II.

It hurts to have swallow the poison you put out for others.

In this case the association we all formed is right on the money.

But what about the children??!!

It's the NRA that keeps pushing the children agenda. I will put up quotes later when I have time.

Once again, it is a matter of intent. The NRA makes valid points. Obama uses children as political shields, based on the same principle Hezbollah uses positioning their aggressive arms and weaponry next to schools and playgrounds.

It is cowardly and disgusting and transparent as hell.

Not only that, but those letters were likely dictated and coerced by those children's parents, which makes those children Obama staged around him used and manipulated by their own parents as well.

The children were prostituted, and that is vile.