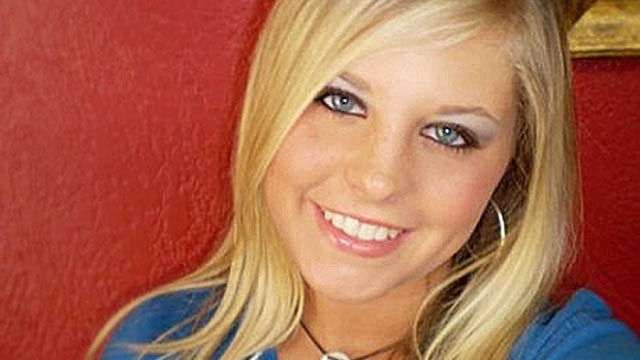 
The Tennessee Bureau of Investigation sent out search dogs Thursday to look for a young woman who has been missing since she was abducted from her home a little more than two years ago.
Holly Bobo was last seen April 13, 2011, when her brother said he saw a man in hunting clothes leading the 20-year-old nursing student into the woods around the family home outside Parsons, about 125 miles northeast of Memphis.
TBI spokeswoman Kristin Helm said dogs from the neighborhood found Bobo's purse on Wednesday and took it to a nearby home. That discovery spurred law enforcement officials to bring in search dogs to work an area roughly a mile from Bobo's home.
"We are trying to find where the dogs found the purse," Helm said in an email.
Bobo was wearing a pink shirt and carrying a pink purse when she disappeared.
Her mother, Karen Bobo, issued a statement Thursday, saying, "The family is so thankful that TBI is working the case. I understand a purse has been found. Our family has cooperated with TBI and begged TBI to show us the purse but we haven't actually seen it."
The family has always expressed belief that Bobo is alive and her mother said they still think that.
"Today we are at home with our minister praying," the statement said.

Holly Bobo at Center of Massive Search Watch Video
When Bobo disappeared, authorities and volunteers conducted massive searches of the hilly, heavily wooded land around the home on foot, horseback and all-terrain vehicles. The searches found Bobo's lunchbox in the days after she disappeared but little else.
Helm said the area of the latest search had been searched by volunteers previously.
The Decatur County sheriff's department didn't immediately respond to a phone message seeking comment. The Tennessee Highway Patrol referred questions to the TBI.
No arrests were ever made in the case. Officials said they didn't consider any of Bobo's relatives or her boyfriend to be involved in her disappearance.
Karen Bobo also thanked the community, which on Saturday held a barbecue and run to mark the second anniversary of the disappearance.
Richard Sopczak (SOHP'-chek), the father of Bobo's best friend, Brittany Brown, said the disappearance has taken its toll on the small town where they live. Many people believe someone local knows something about Bobo's disappearance or may have been involved.
"You hear so many rumors and accusations," he said in a phone interview.
He also has been concerned for his own daughter's safety because no one has been arrested.
Brown was in nursing school with Bobo and will be graduating next month.
"My daughter says a prayer for her every day, on Facebook, she posts a prayer," Sopczak said.
A few days ago, Sopczak's younger daughter found a YouTube video that Brown and Bobo had posted.
"Holly and Brittany were singing 'Party in the U.S.A.' by Miley Cyrus, and they had videotaped it," he said. "I think they were freshmen in college. It just brings tears to your eyes."
A reward of $185,000 has been offered in the case. The TBI asks anyone with information to call 1-800-TBI-FIND.
Peter Hyatt as Statement Analysis Blog at 6:52 AM

I am glad to see that they have resumed the search for Holly. But why now, after all this time?

I've always wondered why the brother didn't intervene or do something to help his sister. Has anybody read additional information about that aspect of the abduction?

In the article above, local anon, they mentioned that a local house dog brought a pink purse home to its owner's house. So now authorities are trying to locate the place in woods that this dog got the pink purse from... The location is mile from house.

The brother's first thought, upon seeing the man approach his sister, as dogs barked and he saw sister, was that it was her boyfriend.

Thanks JerseyJane. That is what I get for multi-tasking. I skipped right over that information. Sorry!

"TBI spokeswoman Kristin Helm said dogs from the neighborhood found Bobo's purse on Wednesday and took it to a nearby home."

-The authorities are referring to it as Holly Bobo's purse, leading me to believe it has been positively identified as such, so her mother's statement was unexpected to me:

"I understand a purse has been found. Our family has cooperated with TBI and begged TBI to show us the purse but we haven't actually seen it."

-"I understand a purse has been found" is passive, does not state that they were contacted or told personally by authorities

-"Our family has cooperated with TBI" -why does she need to articulate that they have cooperated? One would assume the family of a missing person would cooperate with LE! The phrase "has cooperated" makes me wonder if there are some times or areas where they are not cooperating?

-"and begged TBI to show us the purse" -they have begged to see the purse but have not been shown it? This seems strange.

At the same time, "Officials said they didn't consider any of Bobo's relatives or her boyfriend to be involved in her disappearance."

I find this news article to be perplexing, what is going on under the surface?

I hope they find Holly soon.

Statement Analysis had been done on the brother during one of his interviews and there were a lot of sensitivity indicators.

In a Topix post for Parsons there was a statement made by a supposed local that was being "accused" of having something to do with Holly's disappearance:
http://www.topix.com/forum/city/parsons-tn/TUSC9GANP0BHK7O5Q/p8

This person hasn't been named a suspect, but what he wrote was interesting because in my opinion he didn't make a reliable denial.
His first statement amongst others was interesting as well and is a gold mine for statement analysts particularly because his first statement came as an excited utterance. He was not prompted with any questions, he just posted.
Text:
Wow I mean wow ok let me start out with those of you that actually know me thanks for sticking up for me I can't believe it's took me so long to hear about this forum...prior to the Sunday after the search began I was a member of the Henderson county rescue squad I was at my my best friends house in Lexington also a member of the squad the morning of the abduction I was asleep until the the radio toned us out I did my part to assist the comunity and family even though iv never met them in my life... The tbi never once talked to me but yet because of the connections I have with the law I was able to contact the head of the case in FBI I was forced the talk to them and have them try to clear my name cause I was receiving death threats that required me to move back to parsons to protect my grandparents iv had people brake In to my house and but my family in danger and all over these crazy immature rumors... Iv donated DNA,scent swabs (required for the dogs they brought from FBI HQ),fingerprints and even took a polygraph test I don't nor did I ever have anything to do with all this it really sucks liven in a mob like comunity like this cause if one person says the smallest negative thing they are out to crucify without logical evidence ... I'm a well educated well respected father, boyfriend, and friend yet like anyone iv spent my time in trouble in my juvinille years more or less because I was hang in around the wrong croud ....but all that is beyond the point I'm trying to make all these rumors and pointing fingers is destroying my name and driven my family and friends in the dirt for no reason.... I know I can't stop all the talking but all I can ask is keep my little girl and my Gf out of your conversations there is absolutely no need for it .... Just sit back and allow the tbi,FBI,and homeland security do their job it may take time but I don't doubt their abilities... The will bring this sick crazy low life to justice and bring closure and security back to the community

During the 2 yrs since Holly's abduction, doesn't it seem strange that no other abductions like this have occurred elsewhere in the region?
IDK if I could've remained residing in that home, without anti-high anxiety medication, due to the circumstances of Holly's abduction & the knowledge that "out there" lurks someone who has victimized my household with impunity & could do it again with their intimate knowledge of my rural residential situation. Props to the parents who seem to have been able to do this over the last 2 yrs.
It wouldn't be a surprise to learn that someone close to her had involvement in her abduction...yet, there's the Denise Amber Lee murder by stranger-to-her Michael King, in North Port, FL on Jan 17, 2008.

Having read this I thought it was extremely informative.
I appreciate you taking the time and energy to put this informative article
together. I once again find myself spending a lot of time both reading and commenting.
But so what, it was still worth it!

I loved as much as you'll receive carried out right here. The sketch is attractive, your authored material stylish. nonetheless, you command get bought an impatience over that you wish be delivering the following. unwell unquestionably come further formerly again since exactly the same nearly very often inside case you shield this increase.

Also visit my web site ... How To train a Golden Retriever Puppy