Where Is Shawn Adkins?

Where has Billie Dunn gone?

In the time that we have been waiting for the remains found in Scurry County to be identified, Billie Dunn made a brief appearance to media only, and Shawn Adkins has avoided media altogether.

Bille Dunn is known for her love of 'front and center', holding her own press conferences, building her own time lines and taking to Facebook to attack those who doubt her, yet has gone strangely and uncharacteristically quiet.

What does this say about the remains found? 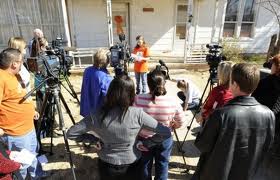 Crime Wire will examine the words spoken by Ms. Dunn, after the announcement of bones found in Scurry County, to see if these words indicate a belief or knowledge that the remains found belong to Hailey Dunn.

Peter Hyatt as Statement Analysis Blog at 4:19 AM

Hiding in the sewer from whence he crawled..

Are you going to a analysis of the Luke Mitchell interview?.

Luke Mitchell - now that would be very interesting John!

Is it a recent interview?

It is from last year,recorded on sky news..

I posted under the Article,Happy Easter 2013 as an OT..

Here is the link..

what did you see in it?

Where is the announcement regarding if the remains are Hailey's? And about what was found with the bones?

Anon @ 7:22; The announcement has not yet been made of the remains found in Scurry County. The DNA analysis as well other analysis of findings (if any) is incomplete.

Enjoying breakfast, while watching the sun making its way up, having coffee and soft poached eggs.

Good question, where is Shawn? I have read on this blog site that he has gone back to Big Spring to live with his mother. When local reporters were trying to interview his parents when the remains were found there was no mention of Shawn living there. Billie not talking speaks volumes. Of course she may be yalking on Facebook, that I don't know.

I would like to see Billie words analyzed in writing following discussion on Crime Wire. Several previously requested that Clint initial words following Hailey disappearance be reposted for comparison to Billie statements on the Nancy Grace Show. Where is Clint btw? The Spellchecker on my phone won't allow me to do possessives. Sorry.

According to Billie Jean Dunn and members of Shawn Adkins' family, Shawn works in a different state

So presumably he is also living outside of Texas

Where is Billie living now, and did she ever get a job?

"Men dont fear me. Only small animals and children"

Shawn is a coward. I would love him to go head to head with my husband who is a real man. He would destroy him.

Shawn is weak and harms only those too small to fight back. This man would never try to go after a grown man becuase ne knows he will not win.

It's been over 2 weeks since we have heard anything about the remains found in Scurry county. Is this a good sign or a bad sign, that it could be Hailey Dunn?

Hmmm ... could it be that these two headed for the border ?

I hope LE is keeping an eye on these two ...

What do they have of Haileys to even do a comparison?
Nothing would be my geuse an that means familial dna is the only way to proceed.

They will have both Billies an Clints dna on file I would think.

So thats what they will have to work with.
Not as straight foward as a standard dna search Hailey dna is not going to be on any data base.

So even given priorty status an rushed through thease tests will take at least three weeks maybe longer.
Depending on the work load st the lab.

No news is good news i m o as although it may take time to get a definitive match.
There are certain indicaters that can rule out a person straight away blood type indecaters are easy to read on even basic dna results.
An the fact that the remains have not been ruled out is an indicator it may well be Hailie
Sex is quite early determined through dna readings as well.

So so far nothing they have found rules out the remains as a viable candidate .
An theres not to many teen girls missing an presumed murdered an dumped somewhere in scurry county.

For the first few days, when LE didn't identify WHO found the remains, I wondered if Shawn had cracked and given up the location, trying to cut a deal for himself...especially when Billie jumped out front and center, and started talking trash about Shawn. I was almost convinced when the second set of remains were found a few days later, that someone was talking. Billie strangely had nothing at all to say about the second discovery of remains, when just days before she talked about how much stress she was under, while waiting for the identification of the 'lake' remains. Why no stress when the other remains were discovered? Does she know the first are Hailey, and the second are unrelated, or did she clam up for another reason?

I'm thinking LE never stated exactly what remains/ evidence were found at the 'lake' location, and then the second set of remains found days later weren't a full skeleton either, right? (I may be wrong here, if LE did confirm what was found, my apologies). If so, the two incomplete sets of remains, taken in context with the belief that Adkins dismembered Hailey, and his COMPLETE silence after each discovery is very thought provoking!

Regardless of whether the two sets of remains are related or not. I agree with 'local anon'... Billie's newfound silence speaks volumes. It is a change in her baseline. While Adkins seemed uncomfortable when forced to speak out, and first refused the poly...Billie convinced him they could 'beat it' by showing up high. Billie ran her mouth almost constantly, even when it was digging her into a deeper hole with the public. She was defiant, belligerent and MORE talkative when challenged. But now, when the scrutiny and pressure are at an all time high, she goes silent! However, not before setting up her defense, saying she's seen a darker side of Adkins, been 'terribly' harassed by him, and now believes what LE told her about his involvement.

Her ploy is SO transparent, she's trying again to align herself with LE, and make it seem like she is an oblivious bystander/victim. When the time comes, BJD will likely try to claim that she 'knew it', (knew in her heart/mind that Adkins was responsible) but didn't want to believe it was true, because then she would have to accept Hailey was dead.

(Please forgive me if i'm wrong about both sets of remains being incomplete, obviously they may be totally unrelated, but it's an interesting prospect. I've been extremely busy the past few days and haven't kept up, other than checking in here daily, hoping for a confirmation announcement that Hailey has been identified.)

The remains found in Scurry County were sent to the forensic lab in Texas on March 21, 2013. There has not been enough time yet. Identify can be determined by DNA from the mother.

The bones they found had they been there for a long time can they give a def time peorid???????

Actually, there is no need to worry about what Billie is saying or not saying, or how Shawn is acting, or where either of them are, since they both know whether or not this is where they dumped Hailey.

I would think they would have Hailey's DNA from a hair brush or tooth brush.

Billie's silence is very telling. She probably got her hand slapped by her attorney and he has finally figured out how to make her keep her mouth shut. Or she is scared speechless! There must be a few followers still out there to convince for a couple more days!

I hope and pray the killers suffer like that child did!

I was told by a teacher in Ccity that Tx Rangers removed a hairbrush and cosmetics from haileys gym locker. This was done at least 4 months after Hailey went missing. I'm assuming it was for DNA.

If this is a photo of Shawn Adkins above Peter's article, is this an extension on his middle finger? I have never seen a middle finger that long!

I do think Bille's lawyer told her to keep her mouth shut and that we will learn the Scurry county remains belong to her. I don't follow either Shawn or Billie's Facebook but am not hearing amything about them talking. Local LE confirm there was somthing found with the remains

David described SA :
be like a deer/rabbit caught in the headlights
to be so frightened or surprised that you cannot move or think http://idioms.thefreedictionary.com/be+like+a+deer+caught+in+the+headlights

David said the door was unexpectedly locked, and SA looked so frightened/surprised that David used the idiom to get his meaning across.

I'm praying these remains are Hailey's so finally Billie and Shawn can no longer hide from lady justice.

Why would a mother move to another town after her 13 year daughter "disappeared" unless she knew her daughter was not coming home ? If BJD knew nothing about the events of DEC 27 and 28, 2010, then hope of Hailey's return would have kept her home waiting for it(Hailey's return) to happen if it were even a mere possibility of happening at all. RIP sweet Hailey