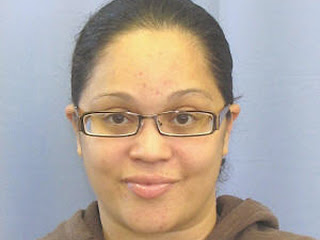 Note articles from PA news are without statements from suspected estranged husband.

The estranged husband of a missing Pennsylvania mother, who disappeared more than a month ago, is not cooperating with investigators.  "Jose won't talk to us," said a frustrated Police Chief Robert Adams during a recent interview at the borough police station. "We asked him to take a polygraph test, but his lawyer denied our request."
Melissa Ortiz-Rodriguez, a 30-year-old mother of two girls, ages 7 and 11, was reported missing by her husband, Jose Luis Rodriguez, on April 23.
Collingdale Police Chief Robert Adams said that Rodriguez, who initially cooperated, has stopped talking and hired an attorney. The police chief described the case as "very frustrating."
Rodriguez allegedly told police his wife left their Collingdale home on April 19 to spend a weekend with friends in Newark, N.J. He told police she left her vehicle at home and said she was using public transportation for her trip. Rodriguez said he became concerned when she did not pick their children up from school on April 22 and did not show up for a new job.

Michael Diamondstein, Jose Rodriguez's lawyer, blames Adams for his client's lack of cooperation.
"Police Chief Adams and his cohorts treated Mr. Rodriguez like a suspect, like an animal," Diamondstein said on Friday. "They've searched my client's house, his cars, done DNA checks, everything they could do to tie Mr. Rodriguez to this case."
Diamondstein claimed that Adams and his investigators made errors in investigating the case, and expressed sorrow that Melissa has not been found.
"The next time, maybe he will treat people with a little more courtsey and a little more respect. Under those circumstances maybe he'll get better results," he added. "Police Chief Adams is reaping exactly what he sowed in this case."
Authorities contacted Ortiz-Rodriguez's friends in New Jersey and confirmed she was supposed to spend the weekend with them. However, they said she never made it there and they have not heard from her since April 18.
Rodriguez, according to police, has since left Collingdale and has taken his children to New Jersey.
Investigators searched Rodriguez's homes in Collingdale and Ocean Township, N.J. They are also examining a truck Rodriguez uses for his job with Amtrak.
Adams said investigators have also been busy this week re-examining everything in the case.
"We've regrouped and we've retraced our steps from day one," he said. "[We're] still working on some things we picked out yesterday."
Authorities have not named Rodriguez a suspect or person of interest in his wife's disappearance. However, Rodriguez' attorney, Michael Diamondstein, said that is the impression he and his client have.
"Generally speaking, you don't get search warrants for the property of people that you think are witnesses," the attorney told HuffPost.
According to Philly.com, Ortiz-Rodriguez had filed paperwork for a protection-from-abuse order against Rodriguez on Feb. 19. In the petition, she said she had tried to leave their home when he emptied the contents of her suitcase in their front yard, pushed her and broke her cell phone.
During a March 7 hearing, the PFA petition was quashed. According to Diamondstein, his client denied engaging in controlling or abusive behavior, and the application was dismissed.
"I don't have my file directly in front of me, but it was either dismissed by a judge or it was dismissed by her," Diamondstein said.
A copy of the court records regarding the dismissal was not immediately available Wednesday.
Peter Hyatt as Statement Analysis Blog at 6:27 AM

The attorney doesn't appear to be concerned about his clients wife, is the client?

Surely, if the husband is innocent, he would want to be cleared.

Sometimes I despair at how attorneys behave.

His attorney is basically saying that his client is more worried about how HE is treated, than about finding his missing wife. Sad.

That lawyer knows his client is guilty. No, police generally don't serve search warrents on witnesses but they do when its a spouse, parent, or caregiver of a missing person in order to clear that person. Only a person with something to hide would be offended by a police request for more information. Division of family services in new Jersey need to keep a close eye on the two little girls.

It's disturbing that anyone would withhold information that could help find a missing person simply because he wasn't addressed respectably. Deeply disturbing. Either the husband or the attorney or both are terribly narccicistic

And I get that some police have framed people, I do think that is rare and in this case, sound more like they were just doign what they always do and rule out the spouse.

Add in the fact that there were VERY recent issues that is even more understandable.

I would camp with the police to get it all done so I could be cleared and they could go find the missing person...

Also find it interesting that the attorney stated "I don't have my file directly in front of me, but it was either dismissed by a judge or it was dismissed by her".

Please, this is your brand new client and this is very likely the main reason they were looking at him so hard right off the bat. I bet this attorney is more than familiar with that sitition.

Its motive! She wanted to leave!

His attorney is basically saying that his client is more worried about how HE is treated, than about finding his missing wife. Sad.

Order is important, here we have the hubby and his attorney putting themselves first rather than his missing wife.

Given the past history he is the prime candidate for involvement in her disappearance.
Statistics make his client the obvious suspect in these kinds of situations. Moms rarely disappear of their own free will leaving their children behind, especially given the record protection from abuse order.

Why is his attorney acting surprised his client was treated like a suspect, even he must know his client's track record makes him look suspicious. Like any good defence attorney he will have done a poly in his office to see how his client fares and whether to allow him to take a LE poly or not. When his client failed then he won't let his client take the LE poly.

"The next time, maybe he will treat people with a little more courtsey and a little more respect. Under those circumstances maybe he'll get better results," he added. "Police Chief Adams is reaping exactly what he sowed in this case."
The next time what?
His client loses a wife or child?
The next time anyone loses their partner?
There will be a next time, his attorney just told us.

Also worth noting is the attorney hasn't tiold us his client didn't do it, he isn't involved. this would be his priority if his client weere innocent.
He paints the standard examinations and tests done in every case especially with the abuse history as doing everything to tie his client to the case. making it sensitive. I bet there is evidence that will incriminate his client, so expect him to try and get it dismissed or explain it away, hence him introducing errors.

I agree- she has already tried to leave and petitioned for protection from her husband. She was in danger. Now she is 'missing', and her husband, the last person to see her, has lawyered up and refused to cooperate with LE.

Also, I'm not buying that she left behind her car to take public transportation on a girls weekend! Sure, I can see taking a taxi or something after going out for a night on the town...but not to take a train, or whatever to reach the out of town weekend destination? The public transport commute would consume a huge chunk of time, and she had a vehicle..NO WAY!

'he became concerned when she did not pick their children up from school on April 22'
Was there no contact between them from 19th - 22nd, even if just to make sure she arrived at her destination or her letting him know she had arrived safe? Or her to ask how her children were? That would be expected.

Have LE spoken to her girlfriends to confirm her weekends plans according to her husband? Was there no plans?

She was to start a new job on the 22nd? It would be interesting to know if he was a jealous/ controlling husband when it came to her work in the past.

-Her friend's said that they did have plans, but she never showed up.

"Authorities contacted Ortiz-Rodriguez's friends in New Jersey and confirmed she was supposed to spend the weekend with them. However, they said she never made it there and they have not heard from her since April 18."

I wonder why they didn't call the husband looking for her?

Hi Lemon! I've been lurking around but haven't been posting for a while.

It's very strange, I hope they find her soon. I wonder if her kids have been allowed to talk with LE, they may just have some info that could help.

He sounds like an oversensitive little wimp. I wonder if he always needs to be treated with kid gloves. And his lawyer sounds like hes saying,"next time give him a binky and speak gently if you want answers"
Aaaaahhhh shuddup, cause while youre crying youre getn your feelings hurt your wife could possibly be chained in a dark hole being tortured." Or maybe your song and dance is meant to distract from your guilt??