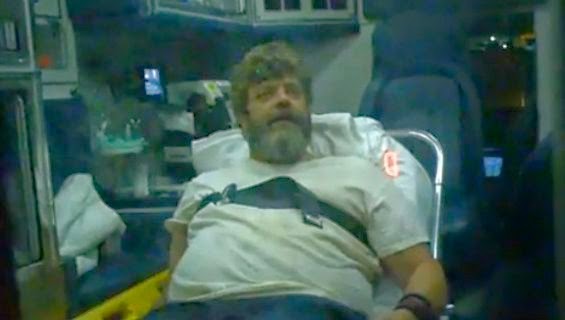 Claiming he was being "stalked" by "haters", Mark Redwine has been hospitalized.

Elaine Redwine:  "I was married to Mark for a lot of years, and I know the way he reacts to things," she went on. "If Dylan maybe did or said something that wasn't what Mark wanted to hear, I'm just afraid of how Mark would have reacted.

To this, Statement Analysis of statements from Mark Redwine, agree.

Mark Redwine had a photograph of himself in women's underwear, along with some other perversions, and likely  went into a dispute with his son, Dylan, which turned deadly.

Redwine has been indicated for deception in Dylan's disappearance and gave linguistic indications of Dylan's death.

He bluffed the Dr. Phil Show claiming to take a polygraph, but backed out, blaming the polygrapher for asking him, "Are you feeling well?"
Peter Hyatt as Statement Analysis Blog at 6:55 AM

He eats feces.It's an animal.

Let's hope his paranoia will cause him to do something that will lead investigators to evidence that he killed Dylan.

Sounds like Mr Redwine is experiencing what Mr Edgar Allen Poe wrote so aptly about in his story 'the tell tale heart'.
Good for him.

is paranioa always an indication of guilt? does feeling stalked mean you sense you deserve to be stalked?

Did he post the pic of himself, who took it?

"He was being stalked by haters." I can only hope that police ARE watching him, waiting. Good to know he feels hated.
Just a few bones of Dylan's were found.

This monster's paranoia is from alcoholic encephalopathy. Soon he'll reach a stage of Korsakoff Syndrome where he physically can't tell investigators how he killed Dylan. May God send comfort to Dylan's mom, brother, stepdad, and friends.

elf said...
Sounds like Mr Redwine is experiencing what Mr Edgar Allen Poe wrote so aptly about in his story 'the tell tale heart'.
Good for him.
May 8, 2014 at 12:42 PM

During his apparent meltdown, he managed to call his reporter pal to complain about the circumstances...I'm not buying this act.

Thanks for the link lulu:

"The father of a 13-year-old boy whose remains were discovered last summer near his home in southwest Colorado was taken by ambulance to a Denver hospital early Saturday morning, authorities say."He has not been arrested," said Sonny Jackson, Denver police spokesman. "We had a 911 call around 2 a.m. from a party at Fox and Ellsworth. We sent an ambulance, picked him up and took him to the hospital."Jackson did not say what injuries, if any, were suffered by Mark Redwine, the father of Dylan Redwine, or whether he was being held for a psychological evaluation.Mark Redwine called a 9News reporter at 2:30 a.m. and said he was at a street corner in Denver, the TV station reported Saturday.The TV station is also reporting that Redwine, who is from Bayfield, said he had spent the past few days driving around the state looking for a new place to live. He told the reporter he thought police had him surrounded near a friend's home. Dylan Redwine was reported missing on Nov. 19, 2012, after a court-ordered Thanksgiving vacation at his father's house.Jackson said he is not aware of any investigation by the Denver Police Department."We had a welfare check," Jackson said Saturday morning. "He's not in custody. He's not under arrest or anything."Jackson said a third party called about Mark Redwine and he was picked up.Mark Redwine's home near Vallecito Reservoir was searched after he told authorities that he discovered his son was missing after he had gone to run errands.Seven months later, Dylan's remains were found about 10 miles from his father's house by investigators doing a week-long search of the area.Investigators don't believe the boy ran away."

He is waiting for the police to come for him. Why not just turn himself in, confess, and end this.

Tell Elaine what you did to her son, and end this.

I wish he would. This case makes me so sad. Poor Dylan.

I think if the authorities just keep up the pressure, he will kill himself.(either intentionally or with alcohol). Remember he stopped to buy alcohol on his last night with his son. He is pretty far gone.

It does seem like MR knows it's game over.

He is waiting on LE to swoop in and arrest him. I don't know what LE is waiting for, I doubt it would take very long for him to fold if LE would just go ahead and bring the charges. (I felt like he was ready to fold on the Dr Phil show, just a few weeks after Dylan went missing.)

Put him in a jail cell, and let him dry out for a few days. THEN, I bet he would tell the whole tale for a double shot of Jim or Jack.

Mark Redwine is the victim of his own "stinkin' thinking."

I'm not surprised that his paranoia has driven him to admit himself into a comfortable hospital where he hopes to get some rest and relaxation.

Mark has got to be weary of lying and trying to cover up and deny his part in Dylan's death and hiding the body.

My sympathies are with Dylan's mother, brother and friends.

Oh shocker. You mean Mark Redwine isn't working the 12 steps yet? Turned it over to a higher power, taken his own inventory blah blah...right.

As someone pretty close to this case, I can assure you everything you're seeing is an act. This what Mark does, he's predictable and a complete idiot.

Anonymous close to case- Do you think they will finally arrest him, or even better - get him to confess?

Anon 6:56, I can tell it is an act. I feel it is heartbreaking such an idiot has caused Elaine so much pain also. People like Mark milk their bullshit act as long as they can. My guess is Mark will not "confess" as some on here are stating they hope he will. Maybe, just maybe, though, he'll get so drunk sometime he'll blab to someone and the truth will come out.

The photo take of him strapped to a gurney is a sign he may be being stalked by haters.

This is the type of crap that keeps people like him from being arrested. If a paramedic took the photo, then one would wonder if he isn't being drugged. (Though he is an alcoholic, it could happen nonetheless).

Often these people that chase these deceased children (and other dead people) stories are capable of doing much damage to their targets.They often follow the crowd and steal from others to move to each new scene, all the while claiming to be helping with the "investigation."

Nobody is 'stalking' Mark Redwine.

The linked article which I posted in the above comment clearly states that HE called the reporter, and told him he was looking for a place to live, and he believed police had him surrounded.

Then it appears that either the reporter, or some other 'third party' called 911, initiating a welfare check by the Denver police.

lol i think youre right!

They need to "surround" the judge that gave this man any type of custody against the deceased will.

Calling the reporter was self-fulfilling prophecy-shortly thereafter he was surrounded by police. Why does he think a reporter would look out for his interest?

I'll bet he is being stalked if the media thinks this is worthy of national attention. Why focus so much on a person who does despicable things?

If they have no proof of his involvement in a murder, they'd best back off.

"Obviously, I have nothing to hide," Redwine said. "Anyone who knows me, knows I would never do anything to harm Dylan."

"My wife is the president and CEO of the haterhood," Redwine said.

Yeah, except she's not your wife.