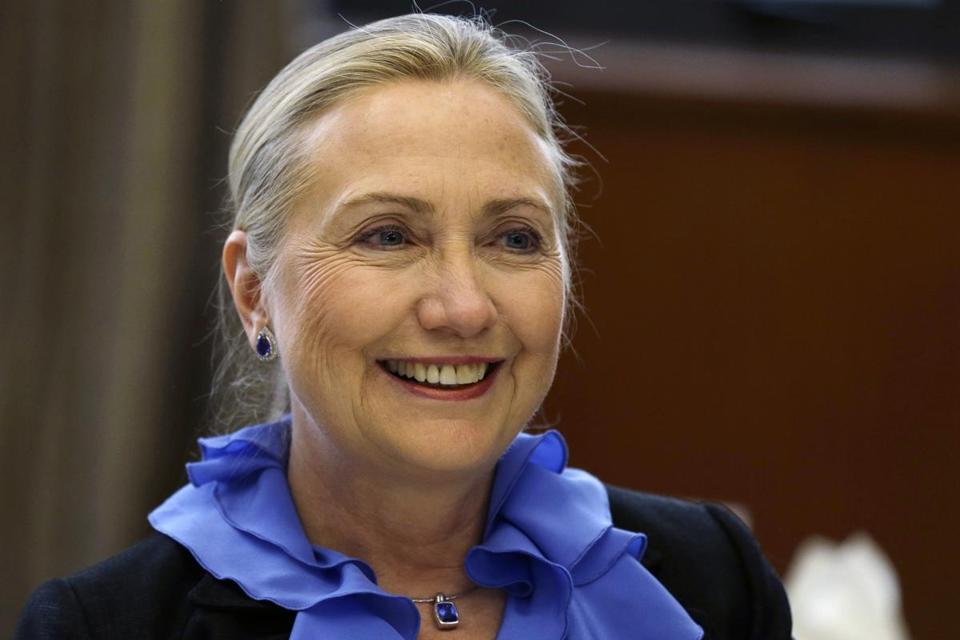 “We came out of the White House not only dead broke, but in debt.
We had no money when we got there, and we  struggled to, you know, piece together the resources for mortgages, for houses, for Chelsea’s education. You know, it was not easy.”

Note upon coming "out" of the White House, "we" are not only "dead broke", but in "debt."
This shows that at the conclusion of 8 years of the Presidency, there were two conditions:

These two conditions in the personal, internal, subjective dictionary of the subject, are separate one from the other.

Note the habit, "you know" indicates an awareness of the interviewer or audience's presence.

3.  "piece together" indicates that pieces existed, but were disjointed.  In the subject's personal internal subjective dictionary, she can be both "dead broke" and "in debt" but this still allows for existing pieces to be put "together" as "resources"

4.  Note that it is not "money" nor "savings" nor "cash" but "resources" that existed, but needed to be put together.

5.  Note next what was accomplished while being "dead broke" and in "debt" by "piecing together" the resources:

a.  "Mortgages", which are loans for houses.  Note that "mortgages" are plural.
b.  "Houses" are, in the personal subjective internal dictionary of the subject, separate from "mortgages", and are also noted to be not "house", but "houses", plural, indicating more than one.

Note the order of priority:

Everyone of us has a personal, subjective, internal dictionary.

In Hillary Clinton's internal dictionary, one can be "broke"and "in debt" but still afford more than one extremely expensive house and a top level college education.

Clinton said: “First of all, we had to pay off all our debts, which was, you know, he had to make double the money because of obviously taxes and then pay off the debts and get us houses and take care of family members.”

The homes purchased when they "came out" of the White House:

This is likely to have some question if the subject is in touch with the average person's financial struggles.

2 homes required, because they couldn't live together after leaving the white house. :)

Peter Hyatt said: Chelsea is not "my daughter" nor "our daughter" but just "Chelsea" in the context of paying for her education, while being both "broke" and in "debt", but still able to "piece together" the "resources" to pay for her education.

Wow! How DARE Hillary use her daughters name in a sentence, IMO, a pronoun is not necessary in that statement.

PK said...
Peter Hyatt said: Chelsea is not "my daughter" nor "our daughter" but just "Chelsea" in the context of paying for her education, while being both "broke" and in "debt", but still able to "piece together" the "resources" to pay for her education.

Wow! How DARE Hillary use her daughters name in a sentence, IMO, a pronoun is not necessary in that statement.
June 10, 2014 at 2:40 PM


It's called an Incomplete Social Introduction. You might have read the principle on this blog from time to time. You'll note that there is no criticism regarding it.

Just lost all respect for her.

Yet she expects people to feel for poor Bill and Hillary cause they Can ONLY afford 2 homes totalling almost 5 million dollars.

I will never vote for her!

They all need to wake the F up!

Dead broke and I just pays several million dollars for homes is a clear lack
Of reality.

The funniest thing to me is the fact that she seems to think that they did something extraordinary by paying for their own mortgages, houses, debts, and daughters education, lol.

That's what everyone is SUPPOSED to do, however extravagant or minimal their income, and however it is made.

I'm amazed anyone would pay a dime to hear a word either of them have to say.

"We need that key bit of information... then this could all be over," said Kate McCann.

Hey Hillary you don't even know what broke is. Smh. I bet her shoes cost more than my monthly house payment :/

I agree with the comment at 2:40. While I think of the Clinton family like the Gambinos or Genoveses it is very reasonable to presume that Chelsea has already been properly introduced to this audience. I'm sure that among them knowledge of who Chelsea is and what their relationship is probably rates at 99%+. Peter you are too good and too smart to show such obvious political bias in your work.

Do Mrs. Clinton need to tell the reporter that her daughter's name is Chelsea?

I think everyone on this planet knows that already.

I think that what "dead broke" means for the Clintons vs. what it means for the average person is quite different. I think for her, finances were a source of stress at that time in her life.

I don't think she is lying. I think she just has a different frame of reference from most Americans.

"We need that key bit of information... then this could all be over," said Kate McCann.

The key bit of information apparantly doesn't include the 48 (technically 56 questions) she didn't answer as well as the e fit (that looks suspiciously like gerry) that was sat on by them and also a gag order placed on said PI's which forced LE to get a warrant for the information from the board of directors. nor does it include taking part in a police reconstruction although they would do their own mockumentary, failing to return for the current search on Portugal incase anything was found such as remain or impossibly a live Maddie but they could return when a £1 mil compensation pot might be in the offing

I think the Chelsea comment represented a lifetime of child neglect while the parents pursued careers. She might have"introduced"Chelsea on the day of this quote.