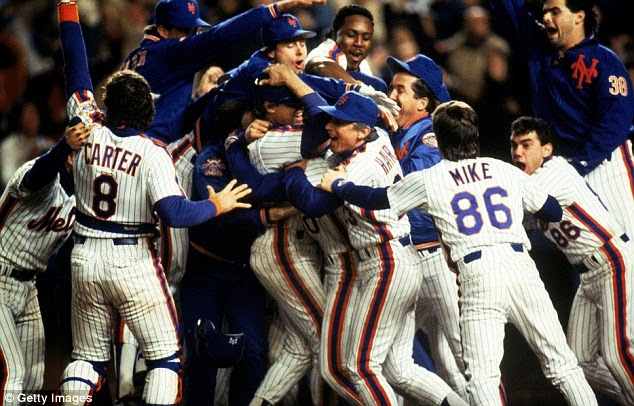 In 1986, the "bad guys" won the World Series.  Jeff Pearlman's book might be a tough read for Mets' fans, but they will not be able to put it down.  Listening to Keith Hernandez and Ron Darling, former 1986 teammates, announce for the Mets, only confirms Pearlman's book.

Dwight Gooden, on crack cocaine, was too stoned for the victory parade.  Daryl Strawberry, all 6 feet 6 inches of him, had used a left cross to knock out his wife.  Both would later be involved in drugs, alcohol, and criminal behavior.

Now, Strawberry is an "ordained minister", with all the requisite insult this holds to the men who have worked hard in education for their calling.  He and his new wife are hawking their book on marriage, as if we're in need of marital advice from such an abuser as he is.

In 1999, Gooden 'wrote' an autobiography in which he alleged that Kevin Mitchell, former teammate and former gang member, decapitated his girlfriend's cat in a fit of rage.  In this autobiography, he alleged many other things.

A few years later, he wrote yet another autobiography, admitting lying in the first.

Now the "new" Strawberry is backing up the story of the decapitation.

Before anyone fires off angry comments about my cynicism over Daryl Strawberry, I am not knocking redemption, second chances (or fiftieth chances) nor that he could have been genuine in his conversion.  I am knocking, without reservation, the mockery of the profession of ministry where a celebrity is suddenly "an ordained minister" without formal education.  I wouldn't go to a man who declares himself a lawyer who has not gone to law school for counsel, nor to a doctor for surgery who has not attended medical school.  I wouldn't go to a Rabbi for Hebrew lessons who did not know Hebrew.

"Born againism" is where a celebrity gives his "testimony", or as we like to call it, "testiphoney" and makes Christ to be his personal servant.

"Uh, I was raised by a prostitute addicted to drugs, uh, well, actually two prostitutes and when I was 7, I mean 5, I killed three men, and look at me now!" as if Christ is in need of the hyperbolic claims of the celebrity.   The "worse" the person "was", the greater and more stupendous is the "conversion."

It is an embarrassment to people of faith, but especially to those who labor long and hard in study.  If Strawberry is genuine, go apologize to his ex wife, and work quietly to help women who have been abused by thugs like him, and keep out of the spot light, trying to game the Christian church for more money.  In 1986, he targeted Tim Teufel, a man at least 8" shorter than Strawberry, as  a target of his violence.  Why?  Because Teufel was a man of faith.  He held to beliefs such as it is unmanly to strike  a woman, and was against the rampant infidelity of Strawberry.

Did Kevin Mitchell cut off the head of his girlfriend's cat, while in a fit of drunken rage?

If you've read here long enough, you know that in human nature, violence often is first experienced in childhood, as the brain assimilates itself with it.  The desensitization process takes time.

But, since this is about Statement Analysis, let's just let Kevin Mitchell tell us, "I didn't cut off a cat's head" for himself.  It doesn't matter that Strawberry and Gooden are habitual liars.  Mitchell, admitted gang member in his youth, can guide us for himself.


A wide-spread rumor that retired baseball all-star Kevin Mitchell decapitated his girlfriend's cat has been further substantiated after ex-Mets teammate Darryl Strawberry confirmed the incident.
The baseball urban legend goes back to1999, when Strawberry and Mitchell's fellow teammate Dwight 'Doc' Gooden detailed the horrifying incident in his autobiography 'Heat'.
While Mitchell has denied the story for years, in an interview with Huffington Post Live on Tuesday, Strawberry said it was all true. +4
Did he do it? Former Mets player Kevin Mitchell decapitated his girlfriend's cat, according to urban legend. That rumor received more backing this week when ex-teammate Darryl Strawberry confirmed the story. Mitchell pictured in 1986 above
'That's a pretty good story. I think that's pretty accurate Kevin Mitchell did do that,' he said.
'Kevin Mitchell, he's a different type of guy. Great guy, super teammate...I guess he figured that the girlfriend was acting a little crazy, so I'll kill her cat.'
Strawberry appeared on HuffPo Live with his wife Tracy as they promote their new book 'The Imperfect Marriage: Help For Those Who Think It's Over'
Strawberry was close with both Mitchell and Gooden during their time on the Mets, and all three were part of the 1986 World Series-winning team. +4
Friends: Strawberry was close to Mitchell during their time on the Mets, in which they both payed on the World Series-winning team. Former teammate Doc Gooden talked about witnessing the horrifying incident in his 1999 autobiography 'Heat' (right). Strawberry pictured visiting the Today Show on Tuesday (left)
According to Gooden's description in Heat, the cat incident happened sometime in the mid-80s when he showed up at Mitchell's house with a friend unannounced.
He says the two accidentally interrupted a fight Mitchell and his live-in girlfriend were having, and were ordered not to leave the house as the couple bickered.
'When we got there, I realized Kevin was both drunk and angry, a dangerous combination. He was holding a twelve-inch knife in his hands, having an argument with his live-in girlfriend. Kevin was right in the girl's face, screaming at the top of his lungs,' Gooden recalls in the book. +4
Champions: Mitchell, Strawberry and Gooden were all part of the 1986 World Series-winning Mets team
Gooden says both he and Mitchell's girlfriend tried to clam him down but he couldn't be persuaded.

'Mitch turned to her and raised his anger to yet another level. Still holding the knife in his right hand, he grabbed his girlfriend's little cat, who had the misfortune to be walking near his feet at that very moment.
'In one awful sweep of his hand, Mitch pulled the cat's head back, exposing its throat.

'"You think I'm kidding when I say don't ever fuck with me?" he shouted. Before the girl could answer, Mitch took the knife to the cat, and cut its head off. Clean.'

In 2002, Mitchell spoke about the incident with author Jeff Pearlman, who was writing a book about the 1986 Mets team.

'How could I cut off a cat's head with a kitchen knife? Hell, I love animals,' Mitchell stated.


This is not to deny the act, instead to divert via question.  Note the embedded words "I cut off a cat's head."

Think how you would answer it.  Would you need to add a question to the denial?  Or, would you simply deny it, using the pronoun, "I", the past tense verb, and the specific denial?
Peter Hyatt as Statement Analysis Blog at 10:14 AM

I would love to hear what Kevin Mitchell's girlfriend at the time has to say about what happened.

'That's a pretty good story. I think that's pretty accurate Kevin Mitchell did do that,' he said.

--Because Strawberry was not present when this happened, and if he had been told a lie, then he would repeat the lie, except he would be using no qualifiers.

I think he "thinks" that it's a "pretty" accurate statement is because he wasn't there. He must have heard it from his teammates (2 other witnesses) who at the time must have told him about the incident. I think they are all speaking with sensitivities and tip-toeing about the incident now because of "fear" of being perceived as backstabbers, or "rats", since apparently Mitchell is a good guy to them. In the 80's all of them being hopped up on cocaine must have made them do stuff they now all wonder how in the world they could have been capable of doing. I believe that's why they don't want to appear critical of Mitchell. After all, none of them came forward back then to condemn him for his actions.