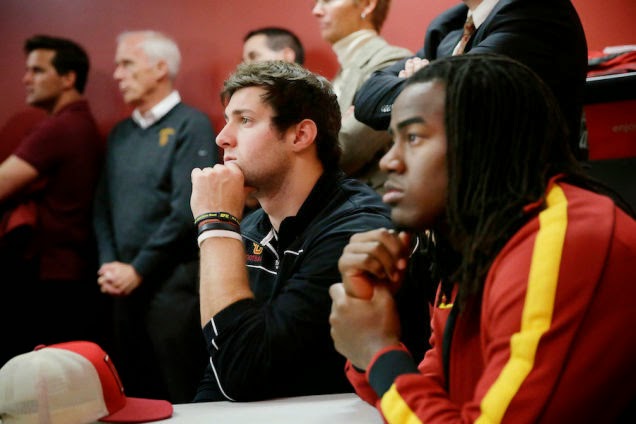 Is football player Josh Shaw a hero or a liar?

Shaw said he suffered a pair of high ankle sprains Saturday night after jumping from the second story of an apartment complex to save his 7-year-old nephew, who was struggling in the pool. Shaw said his nephew did not know how to swim.

Some wonder if, perhaps, he was really saving Manti Teo's girlfriend.

Thus far, we have not been given Shaw's actual statement to his team, but x-rays show both ankles negative for any injury.


TMZ's headline says "USC's Josh Shaw—Named In Burglary Report," but the takeaway is that police talked to Shaw about a report of a guy climbing down the side of a building Saturday night.
Per the report, someone tipped off police that a person was "shimmying" down the side of a building in Los Angeles near the USC campus. Cops talked to a woman who lived in the building, and she turned out to be Shaw's girlfriend. She told police that the description of the "shimmying" dude sounded like Shaw. Cops contacted Shaw by phone; he denied being at the building. 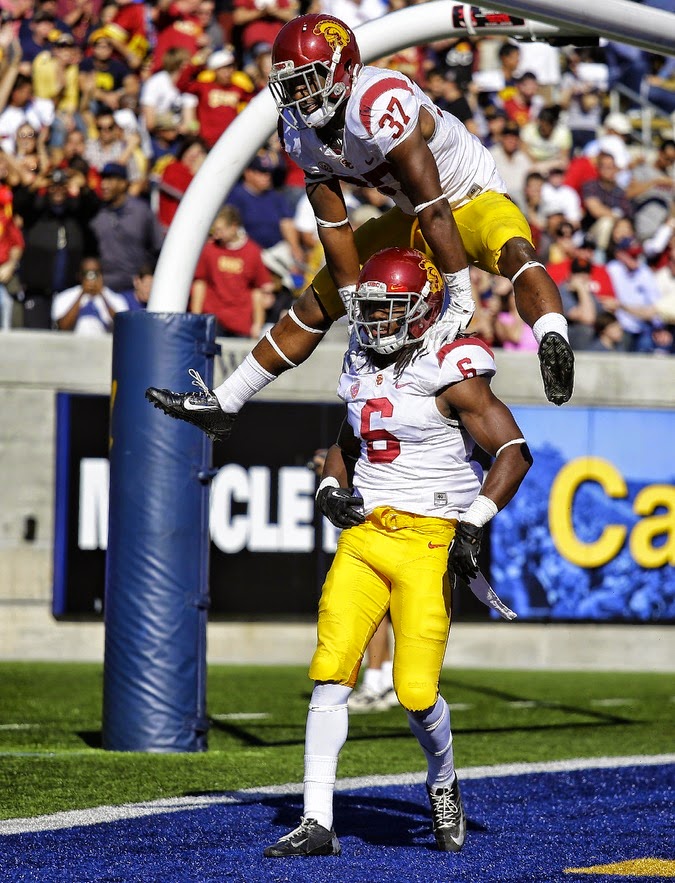 LA Police replied with the following:
We've got no record of us having a run in with him. That's not to say something didn't happen.'
How's that for a prepared statement by police!
USC said that this is how it happened, at least, initially:
While attending a family social function at his cousin's apartment in his hometown of Palmdale, Shaw looked on from a second floor balcony to the pool below and saw his 7-year-old nephew, who cannot swim, in distress without help nearby. Shaw instinctively leaped off the balcony, landing painfully on the concrete below.
He was able to crawl into the pool and ushered his nephew to safety. Despite the intense pain in his legs, he was then able to grab the ladder and lift himself out of the pool with his upper body.

With Statement Analysis, all we would need to read is his original statement about saving his 7 year old nephew, who cannot swim and was alone in the pool,  and we would know if he is truthful or if he is deceptive and possibly a suspect in a robbery.  We don't have that statement but we do have a follow up from him.

He somehow avoided breaking his legs and ankles and later said

""I would do it again for whatever kid it was, it did not have to be my nephew," Shaw said today. "My ankles really hurt, but I am lucky to be surrounded by the best trainers and doctors in the world. I am taking my rehab one day at a time, and I hope to be back on the field as soon as possible."

Why would he need to tell us that his ankles "really" hurt?  Yet, he uses the word "but" to compare it to his fortune of being surrounded by:  1st, trainers, and 2ndly, doctors.
What's missing in his reply?
What about his almost drowned  nephew?  Is he "really" grateful?  really scared?
How is he doing?
Is he frightened of water?
Is he traumatized?
Did he go under?
Was he unconscious at all?
Is he feeling like uncle Josh is a hero?
Note that his statement is about himself, and not about the life he allegedly saved.
USC is now investigating the claim.  If you were to interview Mr. Shaw, what 5 questions would you ask?
We do not have his original statement so we cannot conclude deception, but simply looking at his reply to what was alleged, there is enough to doubt his account.
Peter Hyatt as Statement Analysis Blog at 5:16 PM

1. What happened? (Follow up questions to be asked about the topics/language he introduces.)

3. How/when/where did you determine your nephew was in distress?

4. What happened after the incident/how is your nephew?

5. Why should your story be believed?

He made it all up:
http://www.foxnews.com/sports/2014/08/27/usc-football-star-suspended-after-admitting-story-rescuing-nephew-lie/

OT
Peter, here is a partial transcript of news conference following the 1969 Apollo 11 moon landing that another poster asked to have analyzed.

ARMSTRONG
It was our pleasure to participate in one great adventure. It's an adventure that took place, not just in the month of July, but rather one that took place in the last decade. We had the opportunity to share that adventure over its developing and unfolding in the past months and years. It's our privilege today to share with you some of the details of that final month of July that was certainly the highlight, for the three of us, of that decade. We're going to talk about the things that interested us most and particularly the things that occurred on and about the Moon. We will use a number of pictures, with the intent of pointing out some of the things that we observed on the spot, which may not be obvious to those of you who are looking at them from the surface of Earth. The flight as you know started promptly, and I think that was characteristic of all the events of the flight. The Saturn gave us one magnificent ride, both into Earth orbit and on a trajectory to the Moon. (Photo 1.) Our memory of that actually differs little from the reports that you have heard from the previous Saturn V flights and the previous flights served us well in preparation for this flight in the boost as well as the subsequent phases. We would like to skip directly to the translunar coast phase and remind ourselves of the chain of events -- that long chain of events -- that actually permitted the landing, starting with the undocking, the transposition and docking sequence.

Also, what 7 year-old is considered a toddler?!

oops, misread ladder as toddler, my bad. can't figure out how to delete anonymous post... d'oh.

Peter, if I may, another ot statement Neil Armstrong made on the 25th anniversary of the Apollo landing.

Wilbur Wright once noted that the only bird that cold talk was the parrot, and he didn't fly very well. So I'll be brief. This week America has been recalling the Apollo program and reliving the memories of those times in which so many of us here, colleagues here in the first rows, were immersed. Our old astrogeology mentor, Gene Shoemaker, even called in one of his comets to mark the occasion with spectacular Jovian fireworks. And reminding us once again of the power and consequence of celestial extracurricular activities.

Many Americans were part of Apollo, about one or two in each thousand citizens, all across the country. They were asked by their country to do the impossible--to envisage the design and to build a method of breaking the bonds of earth's gravity and then sally forth to visit another heavenly body. The principal elements--leaving earth, navigating in space and descending to a planet unencumbered with runways and traffic control--would include major requirements necessary for a space-faring people.

Today a space shuttle flies overhead with an international crew. A number of countries have international space programs. During the space age we have increased our knowledge of our universe a thousand-fold.

Today we have with us a group of students, among America's best. To you we say we have only completed a beginning. We leave you much that is undone. There are great ideas undiscovered, breakthroughs available to those who can remove one of the truth's protective layers. There are many places to go beyond belief. Those challenges are yours--in many fields, not the least of which is space, because there lies human destiny.
http://www.thelivingmoon.com/47john_lear/02files/Neil_Armstrong_Disclosure.html

The police aren't going to speak out, this is a football player. They can rape girls, steal crablegs or break-and-enter. It's all about the football.

WHY id Josh Shaw make up this story? What is the motive?

Karen T, if you're still around: Non-football injuries for doing stupid people tricks,especially those inspired by alcohol, are frowned upon in NCAA and NFL. He likely understood that he could be suspended or expelled from his college team, and/or lower his draft status when he turns pro if what really happened was something stupid and avoidable, not heroic and brave.

Peter, this isn't yet addressed in the comments or the analysis: Was Shaw's use of water in his rescue scenario one of the occasional instances where it does not point to sexual abuse on either or both sides of the equation? Do you think it was just the first thing his eye fell on when frantically looking around for a hero-rescue scenario to excuse his non-football injuries?

Do you think this unusual context for the water is simply because it was the nearest and first scenario for his actual focus and goal, which was hero publicity? Or is it significant that water is the evil monster from which he rescued his nephew; subconsciously he compares it to him rescuing a child from a violent pedophile like he's maybe fantasized countless times?