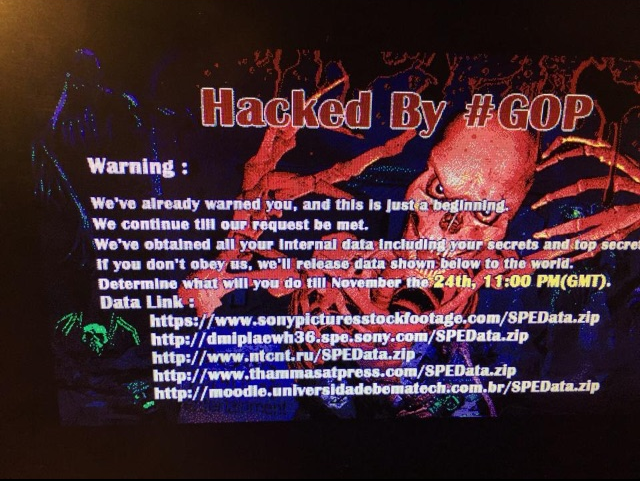 "just a beginning" rather than "just the beginning", for example.

We now learn that internal investigators believe that the hacking is related to North Korea:

ov 29 (Reuters) - Sony Pictures Entertainment is investigating to determine if hackers working on behalf of North Korea might be responsible for a cyber attack that knocked out the studio's computer network earlier this week, the technology news site Re/code reported.
The attack occurred a month before Sony Pictures, a unit of Sony Corp, is to release "The Interview." The movie is a comedy about two journalists who are recruited by the CIA to assassinate North Korean leader Kim Jong Un. The Pyongyang government denounced the film as "undisguised sponsoring of terrorism, as well as an act of war" in a letter to U.N. Secretary-General Ban Ki-moon in June.


Representatives of the North Korean mission to the United Nations could not immediately be reached for comment on Saturday.
Peter Hyatt as Statement Analysis Blog at 7:52 AM


Was Sony Pictures hacked by North Korea because they are preparing to release a comedy about James Franco and Seth Rogan trying to assassinate Kim Jong Un?

When I saw #GOP, my first thought that it must be non-US hackers. In the US, GOP is generally associated with the conservative Republican Party (Grand Old Party.) I would expect a group of radical hackers who were even remotely familiar with US culture to pick a different acronym.

sony is saying it's NK to boost sales for the Interview.

-- if North Korea had this level of hacking skills would they not apply them more brutally and more wide spread?

in any respect it's not North Korea -- it's only a lone hacker who used to be employed by Sony for his hacking skills until they burned him.

the goofy language is just his style.

course you don't have to believe me - but it could save you confusion - I do have this info on good authority.

notice nothing in Sony's lanyage says they believe it's Noth Korea. only that they are investigating "IF" it "COULD" be them, even they can't commit to this theory /self generated spin..

The alleged hackers know to use hashtag symbols and threaten to reveal everything to the world on November 24th. But, nothing happened... it does whiff of PR. I agree the text does sound like someone whose language is not English first, but anyone could fake that... this of Jon Bennet Ramsey fake kidnap letter and trying to plant fake information.

Anonymous 1:34 pm - Pray tell me you are not involved with Anonymous!

haha. no. not to worry. I can't even spell. much less hack :P

the kid who did it has been bragging and giving details on underground hacker chat rooms. that require hacker knowledge to get on -- that I don't have . i just have a friend who relayed the info. he said he knew the guys whole story - that he's been posting about his relationship w/ sony (hiring & firing & jail ) for a while - also I doubt he's related to anonymous it doesn't sound political.