A Tale of Two Answers: Baby Lisa and Philip Houston Part One 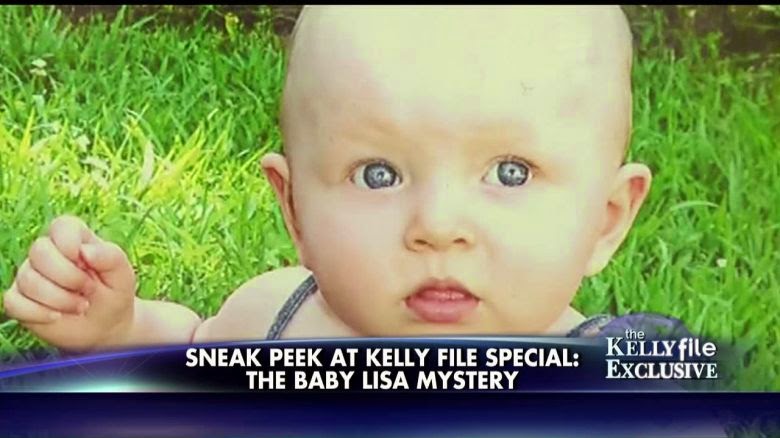 Comments, posts and emails have been unified in content:  How can a deception detection expert think that Deborah Bradley, mother of missing 11 month old, Baby Lisa, think she is truthful?

Tonight, Fox News host, Megyn Kelly will host a program that, according to the released video clip, show that former CIA anti-terrorist expert, Philip Houston, believes that Bradley was truthful about having "none" involvement in the disappearance of her child.

Tania Cadogan was the first to pick up this story for us in 2011 and pointed out some 'problems' in the brief news broadcast appearance by the parents of Baby Lisa, Deborah Bradley and Jeremy Irwin.  Tania correctly identified distancing language on the part of the mother, and asked that analysis be done.

As to why Mr. Houston concluded truthfulness on the part of Bradley, he, himself can give a definitive answer.  He will be asked to, likely, after the broadcast.  It is not the first time an expert has come out with a strange response, calling to mind John Douglas' defense of John Ramsey in the Jonbenet Ramsey case.  In that case, Statement Analysis indicated the parents for deception, with language consistent of child abuse, and we learned later that they both were, in fact, indicted in the death of their daughter by means of child abuse, by a Grand Jury.  Alex Hunter, the District Attorney of Boulder at that time, refused to sign the indictment.  I have enjoyed John's books and was as surprised as anyone at his conclusion, though it appeared to be limited to stating that John Ramsey did not fit the profile of one who would garrote his own daughter.  To this point, many agree, but adding that the garroting appeared to be a staged crime scene by the Ramseys, including the phony ransom note.

The Grand Jury correctly indicted them, but at that time, the Ramseys had high-powered attorneys of whom Hunter could not go up against.  Protecting his own career, he caused an irreparable rift between his office and the police.  That little girl's death proved to be a career breaker for a few close to the case.

Why would Houston conclude veracity?

Perhaps he hasn't.  Perhaps this short clip will prove to be out of context and he later clarifies.  I don't think so, but suffice it for now.

Perhaps, like others on The Nancy Grace Show, the show needed a shill opinion. This is a popular response.  The lawyers on Nancy's show sometimes struggle to keep a straight face when they are forced to defend the indefensible, but it is for entertainment purposes only, and it gives them free publicity which can't hurt their firms.

Perhaps he is a most honest person and simply wanted to believe that Deborah Bradley did not cause the death of her daughter, and that he believes Baby Lisa was kidnapped.

I don't know, but it will be interesting to hear his response as well as tune into the program tonight.

The two answers, however, are excellent samples to be used in teaching deception detection.  Let's take a look at them.

First, we have to understand the questioning.  The question was about their possible involvement and the wording is important.

In analytical interviewing, we seek to ask simple questions and try to avoid introducing any language to the subject.

Mr. Houston's record appears to be one of interrogation, rather than interviewing.

In interviewing, we seek to have the subject do 80% (or more!) of the talking, while we ask open ended, legally sound, non-intrusive questions, with the three "magical" questions being:

This allows the subject to chose his or her own words, and enter the "Free Editing Process" of speech. The FEP means the subject:

1.  Begins his account where it is important to him
2.  Uses words that are of his own choosing, rather than parroting back words from the interviewer.  This then allows us to to use percentages to determine reliability.

A reliable denial consists of:

1.  The Pronoun "I"
2.  The past tense verb "did not" (or the relaxed "didn't") *Note, only Reid makes the distinction between the two.
3.  The allegation specifically answered.

In the above example, the subject simply repeated back the answer.  It may be truthful, but because he did not produce these words on his own accord, we cannot conclude them to be reliable.

Here, we find the subject, himself, producing a reliable denial.  This is more than 90% likely to be true.  If he follows with, "I'm telling you the truth", he didn't do it.  Period.   As the interview progresses, he is likely to inform the Interviewer that he or she is wasting his time because he didn't do it.

A common struggle in law enforcement is with the simplicity of this principle, yet once taught, officers regularly understand that they most often hear the subject say
"I wouldn't take the money", or
"Didn't take the money" or
"I never took the money"
or
"Why do you think I did it?" and so on.  They may give an impassioned denial, like the one Marion Jones gave denying Performance Enhancing Drugs.  That was a great performance but when officers sit down, pen and paper before them, and write down the very words that Jones used, they see that in a powerful press conference where she challenges the United States Anti Doping Agency publicly, she does not, even once, say the simple words,

At the time of the press conference, body language analysts pointed out how clear and strong her answer was, how good her eye contact was, and how she was telling the truth.

Deborah Bradley was facing police assertion that she caused the disappearance of Baby Lisa.  She and her common law husband, Jeremy Irwin are both faced with the accusation of having involvement:

Peter Hyatt as Statement Analysis Blog at 11:31 AM

Prince Andrew has been named in a US court document as an alleged child abuser.

All you have to do to understand why Houston declares her truthful is look at his website, bill stanton is on there and is part of houstons team. Stanton was the one who told us all on national tv about the "astounding" info on the credit card stolen and used to try to change the kids name. Or something like that. Its all a stunt.