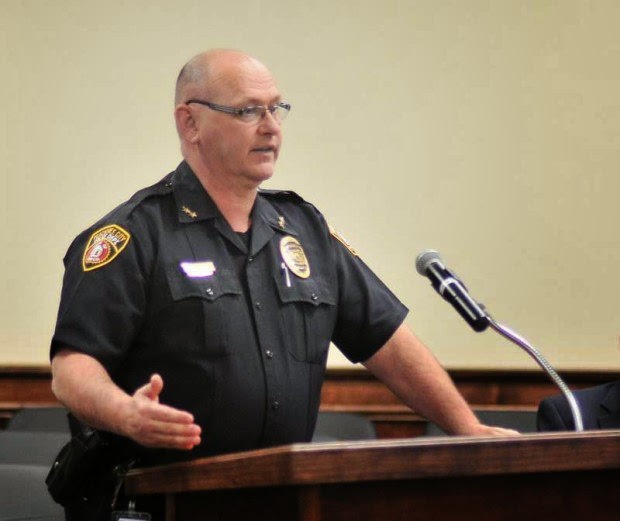 Maggie McCollum's condition has been upgraded from "Serious" to "Good Condition" and the GBI made a statement that Mrs. McCollum "thinks it was an accident" but was "sleeping."

We do not have a direct quote.

However, that she would only say she "thinks" it was an accident is not only a weak assertion, but it allows for the subject, herself, and investigators, to think otherwise.

If this was Heather, she would say "it was an accident", whether she was asleep or not, as a signal of confidence in the relationship.

That Mrs. McCollum allows for even the possibility of it not being an accident should lead investigators to ask questions specifically about:

a.  the quality of the relationship
b.  past assertions by Mrs. McCollum of Domestic Violence
c.  other possible victims
d.  The hours preceding the shooting, particularly focusing upon the night hours (8PM to Midnight), looking to learn if there was an argument.

This passivity is appropriate if he does not know how his service weapon got into his bed.

Not knowing, after 30 years of law enforcement, is concerning, since officers are not only trained (highly) in gun safety, but become attached to their gun, due to the dangerous nature of their work.

For Maggie McCollum to allow, with the weak assertion of "think" the possibility that her husband deliberately shot her, is a red flag for investigators.

For those of you new to Statement Analysis:

"I locked my keys in the car" is a very strong statement.  I use the pronoun "I", and the past tense verb, "locked", which tells you that I believe what I am saying.

"I think I locked my keys in the car" shows weakness.  This weakness is appropriate weakness if I am uncertain.

We have even seen this weak assertions in serious crime cases:

When we have a weak assertion in a topic that should never have weakness, we have a red flag before us.

Mrs. McCollum is signaling to investigators a belief that her husband could have shot her deliberately.  This signal, by itself, is concerning, but when taken in context with the call where the subject yields so little information that he caused the 911 operator to inquire as to the identity of the victim, we have a domestic violence situation.

Is it possible that GBI did not quote her accurately?

It is possible but given the nature of the activity, it is not likely that they were mistaken.  Even if fully asleep and unaware, a spouse in a good relationship would not likely allow for the possibility of being shot in a heated argument.  This possibility tells us that she has her doubts and that there may be much more to the story than we know.  That "everybody was asleep" while only two people were in the home tells us that there may be a third party involved, otherwise, it sounds like alibi establishment, or "story telling", which not only has "everybody was asleep" but it happened "in the middle of the night", rather than "it just happened", bringing the timeline into doubt.
Peter Hyatt as Statement Analysis Blog at 12:01 PM

I hope she leaves him immediately and is on high alert.... Not just thru the divorce but continuing....
Next time she may just be reported "missing" but never found. As in many of these other cases.

He failed to kill her this time... I doubt he will give up on that attempt.

I hope you can see this. I thought it is quite apt, given the principle. When one goes beyond the question asked, it is doubly important ?

"People always overdo the matter when they attempt deception".

Again, if Peter and members can see this.

That "everybody was asleep"

This is where i would focus. I guess, surely, the GBI have, hopefully zoned in here.

Colleagues, Neighbors and friends alike, have all, well most, have eulogized how they seamed (from the outside looking in) how "normal" and happy they were.
People can paint a picture to the world about how happy their family life is.
Once that door is closed, the picture can become a fraud, and often does, concerning D/V.

I have have witnessed it myself with my parents while growing up. The screams, the noise, the the sound of punches, glass breaking, the pleading "NO NO NO". This was from both of them, Mum and Dad. They were as bad as each other. (alcohol fueled, i may add) I hated that smell in the morning!!

Anyway, sorry. My point being, all is not always rosy in the garden!! (as stated above about they, the McCollum's, things may have been) from the outside yes, and from inside too. This may have been an "accident" which i doubt!! There are weeds in between the roses. It's how we choose to grow the rose's, and allow the weeds to help in the cultivating a happy garden ?

OT
Inside Edition will air an interview with baby Lisa's parents today.

OT
Alan Dershowitz: What kind of denial is this?

What a difference! This guy comes out swinging! Compare this to Bill Cosby!

"This is a zero sum game. Either I'll end up being disabarred and criminally charged or they will be. There's no gray area here."


They will not state on your show, 'Alan Dershowitz had sex with this woman,' " Dershowitz said. "Because if they do that, they're in court the very next day being sued for defamation for $100 million."

2) Have there been other Jane Does that he is concealing, but only feels bound to deny this specific one he is being accused of? ummmm....

I've always liked and admired the man, but if he has in no way ever been involved with the woman or never had any personal contact with her, why is he not saying so? Since he has not stated that he does not know her or never has met her, then it appears to me that he has had some sort of prior contact with Jane Doe #3.

3) If this prior contact was purely innocent or was on a professional level, why is he not admitting that he knows who she is, and why is he not divulging those circumstances?

I think he doest protest too loudly? I think that if you are planning to sue someone you don't threaten them with a lawsuit and give them time to gather up their ammunition, you just do it, but meanwhile you keep your mouth shut? Any right thinking lawyer ought to know this. ummmm......

Imagine her horror when she realised her husband tried to kill her when she was asleep!
She knows it was deliberate but if she was asleep how can she prove it? She's being careful, I hope GBI are playing their cards close to their chests and building a case against him.

to be fair you can't know something you don't know. if somebody I loved and trusted shot me in the middle of the night -- I's say you'd have to ask him because I have no freaking idea what happened and I hope to gd it was an accident.

getting shot while I was sleeping would make me question the must perfect of relationships -- that incident in itself makes the relationship imperfect.

however -- I would not say "I think it was an accident" that sounds like covering. I would only say that if I was afraid of saying otherwise.

so in that sense i agree, I also suspect she was really awake. if he had shot her in her sleep seems to me his intention would have been to kill. she was probably saying something he didn't want to hear or something like that and he shot to maim and gain control.

if the relationship was great, the natural healthy reaction to being shot in the middle of the night would be fury, it doesn't matter how much trust there is between them that's one hell of an accident to forgive immediately.

They're just looking out for their own lackadaisical butts allowing people to think this while they sit there doing nothing and don't intend to do anything; either that, or they decided early on they want to keep the matter hush-hush for their own reasons. You and I and Peter and the rest of us sitting here are doing more about these cases than they ever will do.

There ya go hon, that's the REAL scenario.

This case makes me wonder what Susan Murphy-Milano would have to say about it. She is missed.

Apparently Margaret is aware that the local precinct and their affiliated good buddies will not protect her from her husbands' abuse and feels that for her own protection she has to continue to cover up for him by claiming that she believes the shooting was an accident. Surely she is aware this was no accident.

How sad when wives of police officers know they have no police protection from their violent husband. Katherine Peterson knew that she had no protection while her police officer husband continued to abuse her and lived under dreadful fear; just as Stacey Peterson came to realize too late that she too would meet her doom at her husbands' hands and would not be able to stop him while she lived under fear with only a minister to seek advice from until her mysterious disappearance. Very sad.

IMO, Margaret McCollum has not choice but to watch her back.

Agree that "Chief Will is abusive scum. I wonder if he hopes she lives or dies. I suspect he's so arrogant he wants her alive so he can keep controlling her. He deserves death himself. Abuse of power by armed police is beyond reproach."
YES--VERY SCARY when bad abusers are IN POWER--also SCARY that the Dist.Attny would NOT pursue this lying abuser!!!!
Will proves that he's taunting her & continuing his abuse when he says: "Can you breathe DEAR?" He's STILL actively abusive! while she's moaning & bleeding!!
UNBELIEVABLE that they did NOT ARREST Will. A TRUE brotherhood of silence! Birds of a feather...