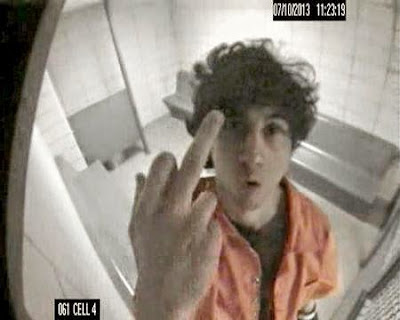 People do what they believe.

Learning what they believe in order to counter what they do is key.  The language gives them away.

Remove the language and you will be unable to understand or predict next, what the criminal does, or will do.

In a surprise verdict, the jury deliberated for 14 hours and has given the death penalty to Boston Islamic jihad bomber, Dzhokhar Tsarnaev.

This has resulted in 328 dead and 491 wounded.  They include the following:

In the Boston attack, Tsarnaev played a role in detonating two powerful backpack bombs in a festive crowd near the finish line of the 2013 Boston Marathon, killing three people and injuring hundreds more in a terrorist attack intended to strike a blow at the United States.

The pattern of jihadi is that the killer experiences a religious "awakening" and becomes "devout" subsequently,  drawn into a deep commitment to the Koran, which calls for specific violence, coercion, conquest and death to those who do not yield, or who refuse to pay the "tax."

Specific death is a written prescription for followers of the Koran to obey, specifically to Muslims who do not obey the Koran, Jews, homosexuals, and anyone who converts to Christianity from Islam.  The Koran teaches violence against women, specifically, who do not yield to their husband's demands.

That Mohammad had multi wives including a 9 year old bride, has led to child rape in Islam, with a recent mass rape by ISIS, with one child reportedly pregnant.

President Obama ordered the Dept of Justice to remove all references to the Koran in their anti-terrorist tactics training.  Previously, DOJ viewed the specific Koran teachings to understand their enemy.  The removal of the Koran removes that which shows motive and activity, in patterns to be studied.  This is akin to removing "Mein Kampf" from the US military in 1941, not allowing the military to study the ideology behind the killing of the Jews, or the taking of land from the Polish and Russians.  He has distinctly attempted to remove "Islam from Islamic terror" in the American dialog,  in general, but has had Imans being paid to go into federal prisons to teach the Koran.

He also blamed "poverty" on Islamic terrorism, which is refuted in studies of those who commit Allah Akbar acts or join jihad or even ISIS:  educated, middle to upper class males (more than females) who experience a deeply profound religious awakening, and become very strict in their observances of the Muslim religion, following the Koran literally and exhaustively.

Also within Islam is both the written and verbalized pathological hatred of Jews, and deny the existence of the nation of Israel.  In spite of vows to "annihilate" Israel, President Obama has been the front runner to allow Iran to develop nuclear weapons.

A the Boston bombing, my son was present, but uninjured. He witnessed much of the carnage, and the city of Boston has suffered deeply.

For a Muslim to denounce the violence would mean they must denounce the Koran's teaching on violence.  To do so means to be targeted, specifically, by death threats by the most devout followers of the Koran.  For these, being a "Muslim" is more cultural, than religious and do not support the violence, but the silence from mosques around the country, as well as Imans who teach violence against Jews, women, homosexuals, and those who leave Islam, are often given air time in media, portrayed as "peaceful" without regard to recorded speeches to the contrary.

Deception is prescribed in the Koran, forbidden, however, to be used on fellow Muslims:  only the "infidel."

From the Boston Globe:

US District Judge George A. O’Toole Jr. will impose the sentence at a hearing where Tsarnaev’s victims will be able to confront him and he also has the option of addressing the court.
After the verdict was announced, O’Toole told jurors, at least three of whom wiped away tears, “You should be justly proud of your service in this case.”
Defense attorneys, seeking to save Tsarnaev’s life, portrayed him as the puppy dog-like follower of his troubled, violence-prone older brother, Tamerlan, who became obsessed with waging jihad and died in a firefight with police.

One of those who turned to social media to share their views was Sydney Corcoran, who was seriously injured along with her mother, Celeste, who lost both legs in the blast.
“My mother and I think that NOW he will go away and we will be able to move on. Justice,’’ Sydney Corcoran wrote on the Twitter account. “In his own words, ‘an eye for an eye.’ “
Boston Mayor Martin J. Walsh said in a statement that the “verdict provides a small amount of closure to the survivors, families, and all impacted by the violent and tragic events surrounding the 2013 Boston Marathon.’’
“We will forever remember and honor those who lost their lives and were affected by those senseless acts of violence on our City,’’ Walsh said. “Today, more than ever, we know that Boston is a City of hope, strength and resilience, that can overcome any challenge.”
Dzhokhar Tsarnaev was convicted last month of 30 charges, including 17 that carried a possible death penalty, in the first phase of the two-phase federal death penalty trial.
The defense never contested his guilt, focusing instead on the second phase of the trial, in which the jury was asked to determine whether Tsarnaev should get life in prison without parole or a death sentence. Over 11 days of testimony jurors heard from more than 60 witnesses, most of them called by the defense in an effort to humanize Tsarnaev.
Tsarnaev did not testify himself during either phase, showing little emotion as he sat in the courtroom, leaving him an inscrutable figure to the jury that decided his fate.
But in a statement he wrote when he was hiding from police several days after the bombing, he said he had acted because the US government was “killing our innocent civilians. ... We Muslims are one body, you hurt one you hurt us all.”
“These are the words of a terrorist who thought he did the right thing,” Mellin told jurors. “His actions have earned him a sentence of death.”
The homemade pressure cooker bombs planted by the Tsarnaev brothers went off just before 3 p.m. at the race, a colorful rite of spring in which thousands of runners, including top competitors from around the world, stream down the course into the heart of the city.
Three people were killed and more than 260 others were injured, including 17 who lost limbs. First responders and people in the crowd rushed forward to help, and the city’s renowned medical community saved lives that were hanging by a thread.
A massive manhunt followed that ended several days later in a violent, chaotic showdown. After authorities released their pictures, Tsarnaev, who was 19 at the time, and his 26-year-old brother murdered Collier while he sat in his cruiser on the night of April 18, 2013, in an unsuccessful attempt to get a second gun.
When police caught up with the brothers in Watertown, just outside the city, in the early hours of April 19, the brothers hurled more deadly bombs and fired dozens of shots at police. Tamerlan Tsarnaev died after being shot by police and run over by his own brother as he made his escape.
Dzhokhar Tsarnaev slipped away from the legions of police who swarmed to the area as the governor, in an unprecedented step, urged residents of Boston, Watertown and other nearby areas to stay indoors and “shelter in place.” But Tsarnaev was ultimately captured later in the day, hiding in a boat stored in a Watertown back yard, where he had written the note explaining his actions. A stunned region breathed a sigh of relief.
People in Boston and beyond rallied together after the attacks, expressing sympathy and offering support to the bombing victims. At the same time, questions were raised and investigations launched into why the attacks weren’t prevented.
Tsarnaev arrived in America with his family when he was 9 years old. Jurors heard from his teachers in Cambridge that as a young boy, he was an A student, smart, popular, and kind. He became captain of the Cambridge Rindge and Latin School wrestling team and went on to the University of Massachusetts Dartmouth, and witnesses described him as a laid-back, and fun-loving college student.

I always wonder..if when the moment arrives...either they die with their victims or die later...if they feel any regret. If even for their own lives.

Like if this kid is to die by lethal injection, what will he think of feel as he's walking in shakles, being strapped down and prepared for death.

bho enables the spread of islam by refusing discussion of it's evils.

So, we will see more.

@trustmeigetit- I think it doesn't matter if as long as they (extreme muslims) die as a martyr. I think they still believe in the 72 virgins and doing what is best for Allah.

Muhammad was also a cross dresser too. The authentic hadith literature unashamedly states that Muhammad wore Aisha’s apparel as he reclined before her, and also exposed his thighs in front of men.

Here is the link for the source:
http://www.answering-islam.org/Responses/Abualrub/mhd_cross_dressing1.htm

Trustme:
I believe this "kid" will die an old man. He has attorneys milking this case that will get his sentence reduced. It is my suspicion. I also believe that if he actually manages to die by lethal injection he'll be in his mid 40's. Personally, I hope his cell is maddeningly small. I hope his jailers slip some lard into his food on a daily basis too! No vestal virgins if you are unclean! On the day of his execution, instead of stuffing his butt with cotton, they should use bacon!