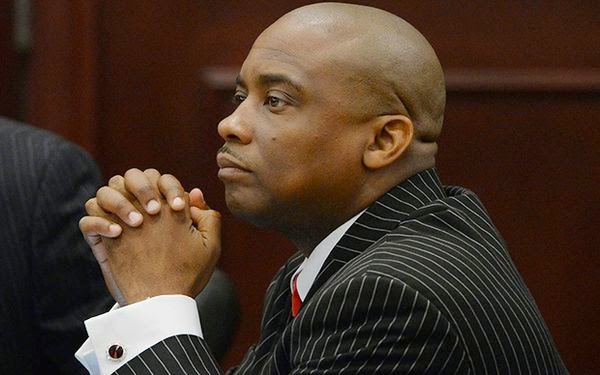 Every news day brings opportunity for analysis.  Here, you can see that even the unnamed author of the article, "AP", indicates his or her beliefs about a person.  (Do you think the writer is male or female?)

When practicing Statement Analysis in a news story:  analyzing quotes is the main exercise.

But what about the news writer?  The article is in plain font with Statement Analysis in bold font.

As you progress in your study, you will find that S/A enters and impacts how you listen to people, and how you read articles, and even how you read books.  This is a good example for you to try.

Some reporters and news agencies are known for bias more than others.  This writer is listed only as AP, not by name.  See if you can avoid looking up who wrote it, as you not only read it, but read it through the lens of Statement Analysis, while obtaining the import of the news:  a sheriff has shot a woman and is refusing to be interviewed about it.  This is the "main event" of the news story.  Therefore, not "unnecessary" elements to the story by the AP author.

In our judicial system, we have the right to remain silent.
We can have an attorney assigned to us for the purpose of protecting us against malicious prosecution.

In a shooting claimed to have been made in the line of duty, different application will be seen, including departmental regulations.

What do you make of this case?

Victor Hill is, thus far, refusing to be interviewed in the shooting of a woman at a model home.  He has surrounded clothing and his gun, for investigation.

By refusing to be interviewed (at this point), the subject is, in essence, being asked,

"What happened?" and then not answering the question.

When one does not answer a question, the question, itself, is sensitive to him.  The reason for the sensitivity is not known at this time.

One may indicate a question is sensitive by:

The question may be sensitive because:

The unknown may learned in follow up questions, collateral interviews, evidence, etc.


Here is from the AP

Police: Georgia sheriff shot woman, would not give statement

Sheriff Victor Hill has been a lightning rod for controversy since he fired 27 deputies on his first day in office a decade ago and then used a military tank on drug raids in suburban Atlanta's Clayton County.

He was voted out of office in 2008, but won it back again in 2012 despite facing felony corruption charges.

Now, police in suburban Gwinnett County say he shot a woman Sunday in a reported accident, but refused to speak with investigators at the scene.

The woman, 43-year-old real estate agent Gwenevere McCord of Jonesboro, was listed in critical condition Monday, police said.
Hill and McCord were alone in the model home that's listed at $329,990, and he's the one who called 911 around 5:39 p.m., police said. However, police said he kept mum after that.

Note the article's inclusion of the value of the home as important to the writer, who is only listed as "AP"
Note next that his 911 call, if released, will likely give us answers, via Statement Analysis.

"He refuses to give any statements," Gwinnett County police Sgt. Brian Doan told reporters late Sunday.
By stating this in the present tense, indicates ongoing attempts to gain answers.
Hill was released with no charges.
This is because the law recognizes that in the course of duty lethal force may be used.  There must be an investigation first.

The shooting scene is about 50 miles northeast of Jonesboro, where Hill's office is located.
Three lawyers who have previously represented Hill didn't immediately respond to phone messages and emails from The Associated Press Monday.

Note the author's own emphasis:

Hill took a tough-on-crime stance in his first term, raising his profile in part by using a tank owned by the agency during drug raids.

He was unseated in 2008 after a single term, and an indictment in early 2012 accused him of using the office of sheriff for his personal gain. Despite the corruption charges, voters return (sic)  him to office.

Shortly after his re-election, the board of the Georgia Sheriffs' Association asked Gov. Nathan Deal to appoint a review panel to look into suspending Hill and recommended his suspension.

The governor declined to convene the panel, saying the law applies only to those indicted while in office. Hill's indictment focused on his time in office but was filed when he was a private citizen.

At trial in August 2012, Hill's attorneys argued that he simply rubbed some people the wrong way, and called the accusations against him politically motivated.

In Statement Analysis part of the context is the messenger, but it only comes after the analysis of the message, itself, which may reveal bias.  Bias on the writer's part or...bias on the part of the person the writer is referencing.

Special prosecutor Layla Zon said Hill took his county car on out-of-state trips paid for in part using a county credit card. Two young women went with him, she said: one a former county employee and one who still worked for the sheriff's office but who was on paid medical leave that Hill arranged.

Here is an example of "unnecessary information" being "doubly important" to us.
The writer reveals his or her own thoughts on this sheriff.

1.  Note the inclusion of gender by the AP author which is not unexpected.  What is, however, unexpected is that the woman are said to be "young."  This is alleged to come from Layla Zon, but is not quoted.
Since everyone of us has a personal, subjective, internal dictionary, what is "young" to Layla Zon.
Is it that the two are "girls" and not "women"?
Or, is it that they are just barely legally "women", instead?
Yet, context sheds light:
One "a former county employee"
One "who still worked for the sheriff's office but who was on paid medical leave that Hill arranged."

They are "young", but not only of work age for the county, but with one in present tense, the work 'continues', as reflecting age.

It is important to the writer that we, the audience, know this is what Zon reported:  that in this vehicle, traveling, were two women who, in context, are "young."  The suggestion is that they may have been "young" compared to the only other person in the vehicle, the sheriff, therefore, what does the author wish to 'imply' by its inclusion?

Does this fall under the category of "Need to Persuade" by Zon?

2.  Note next that it is also unnecessary that they  tell us that one of them is out on medical leave. It is not part of any allegation, yet:

3.  Note now that it is important to Zon,  that we, the audience intended through AP, not only known that one of the females is "young" and that she is out on medical leave, but also wants us to know that this medical leave was secured by the sheriff.

But the jurors acquitted him of all 27 charges, including theft and giving false statements.

That cleared the way for Hill to continue as sheriff of the county in Atlanta's southern suburbs. Since then, he's mostly stayed out of the headlines until this week.

Late Sunday, police in Gwinnett County said investigators have been consulting with the district attorney's office and no charges have been filed in the ongoing investigation. Possible charges against Hill would proceed differently since he's a sheriff, police said.

"When you're an active sheriff in the state of Georgia, there are certain legal requirements and steps that have to be taken," Doan, the Gwinnett County police spokesman, told reporters at the scene. "It's not just an average citizen where you can take out a warrant for their arrest."

Note Sgt. Doan's statement is made without sensitivity indictors of bias, or attempting to conceal.  This is following law.  The use of second person is appropriate because this law is not about Hill, but law enforcement in general.

Norris said he didn't know enough about the current situation to comment.

"We don't really know anything about it, honestly," he said. "We know what the media reports have said. I'd certainly like to know more.

A strong indication that the subject knows more than media.  This is not surprising, but the need to conceal this comes out with "really" and then affirmed by "honestly."

With privacy laws, for example, in the medical profession, doctors and nurses are 'deceptive' in withholding information.  They must be, similar to social workers.  Like all of us, that information is being deliberately withheld, enters the wording because it is in the mind, at the time.

Note also  "we" associated with "honestly", but the change to "I" is stronger:  he wants to know "more", affirming that some information is known or suspected.

Doctors, nurses, social workers, teachers, and other professions that must conceal identity may indicate this in their language.  It does not mean they are "deceptive people" but are forced to, by their employment, license, ethics, etc, conceal information.  At times, it may even show "suppression" of information, that is, where effort is evidenced in withholding the information. This is particularly true in a case where you will find longer sentences indicating the presence of emotion.

Emotion has the ability to change language more than anything else.  It's inclusion is often the difference between "withholding" information and "suppressing" information.  More on this in upcoming lessons.
Peter Hyatt as Statement Analysis Blog at 12:12 PM

Hill's statement is as follows:

"As reported, on May 3, 2015, I was involved in a tragic and heartbreaking accident. Gwenevere McCord, who is very dear to me, was critically injured in this accident. Please understand that for the past 48 hours, I have been entirely focused on Gwenevere and her family. I will continue to pray unceasingly for her recovery. I ask you all to please pray for Gwenevere and her family throughout this most difficult time."

The shooting happened around 7 p.m. Sunday on Britt Trail Drive in a new subdivision called Park Haven in Gwinnett County.

Hill and McCord were inside a model home.

Police said Hill made the 911 call, which he reported as an accident.

However, Hill would not answer any questions about the shooting, and Gwinnett County police described him as "uncooperative."

McCord was shot in the abdomen, police said, and was in critical condition when paramedics took her to Gwinnett Medical Center where she underwent surgery.

Gwinnett County police did not know why Hill was handling his gun or the nature of his relationship with McCord.

The victim's family says the two were friends and they believe the shooting was an accident.

"They're close friends," Ernest McCord said. "It hasn't been anything other than that. But then, I'm dad. They don't tell daddy everything."

By law, Hill is entitled to keep quiet at this point. He has not been indicted or charged with any crime.

27 charges were dropped. Embezzelment, fraud, amoung others. He is a liar! Don't know what happened in that model home, but I'm not getting a good feeling about him. Will have to wait and see. He's smart enough to not talk. He'll probably lie his way out of this. Who knows anymore if an investigation will uncover the truth.

It seems as if the writer of this article is not in favor of the sheriff. I have no idea why the mention of the price of the house. About the 2 young women that went with him, the writer says one was on medical leave that he arranged for her. Another instance of fraud?