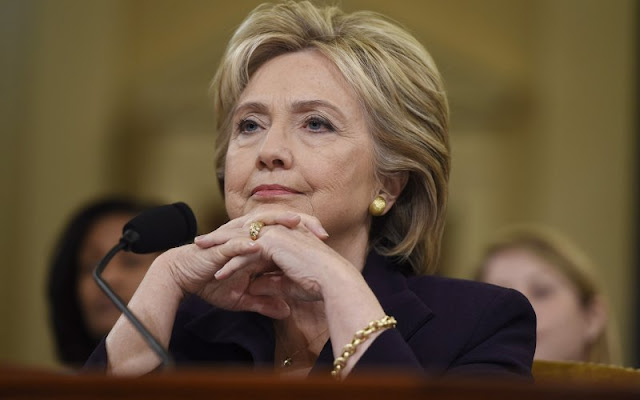 Paul Ekman said that "I don't recall" is the number one deceptive response during testimony.  We may take this in various forms, but there is a reason why it is easy to lie this way, making it popular.  This same principle can be applied to "yes or no" questions, which is why opened ended brief questions are always best.

The lapsed memory is a low-stress form of deception as it completely avoids going into the stored memory and choosing words from this source.  Hence, the stress of deception is greatly reduced since no "speed of transmission" disruption exists.

Here is the video clip:


Note the contrast to the emails from Sidney Blumenthal.

Body language analysts may wish to weigh in on this as well.

This is what people often call, "the straight face test" in seeking to discern truth from a lie.

Without bringing the subject's focus to the event, itself, by forcing her to utilize her own wording, the stress of lying is all but eliminated, leaving only those with tender consciences prone to stress.

Sociopathic liars experience stress in lying, but only when the subject, herself, or himself, is choosing words from the actual event which are stored in their own personal dictionary.

This is how polygraph examiners can obtain 100% success by the careful screening of the subject before the test, and constructing questions that came directly from the subject's own dictionary when the subject was talking about the event.

:/ I do not like that woman. I wont even give her the dignity or excuse of being a sociopath. She's trash.

OT: Our former neighbor has a history of sociopathic behavior, lying, manipulating, using people. She brags how good she is at "engineering" people as she calls it, and blames everyone else when her lies always blow up in her face.
But she doesn't show any stress while lying, only when caught. She borrowed our truck once, before we learned how toxic she is.

Returning our keys, I hadn't even asked the question when she smiled, looking me straight in my eyes and said cheerfully, "Your keys never left my hand and your truck was never out of my sight, I swear to God!"

Me: "Did you ever talk to Employee? She called here a few times when you weren't responding."

Psycho, sneering, but still looking right in my eyes: "I've been driving back and forth from the dump all day with no help while Employee sat on her fat azz doing nothing, so she can just f--- herself!"

Me: "She was calling from the dump; she couldn't open my tailgate and had left you several messages asking you what to do."

Psycho does her patented "Whoa!" with both hands up that she always does when complaining someone again has wrongly accused her of lying, and asked me, "Did you just call me a LIAR??!!?"

She immediately started screaming calling us both ungrateful, wth? But again, zero internal stress shown during that lie and many others, and instant rage when called out or just senses everyone knows she's lying again.

Is this one of the rare true sociopaths? Some of her "engineering" stunts using people are literally bone-chilling, and she always cries victim, refusing to see how she's hurt people and/or cost them a lot of money.

elf, I'm offended you call her a woman! :^D
Seriously, it has nothing to do with party affiliation, gender, religion, this POS is just absolute scum who cares nothing except for herself. I think she would unhesitatingly hand over Chelsea to any terrorist who could help get her elected and it wouldn't lose her a second of sleep, nor would destroying a few thousand more lives for little gain.

That they would even consider nominating this feces stain only because they think she has the best odds is sickening.

The whole episode seems more and more like a ploy set up by the boys father, who sought leadership (and failed) in his home country.
The more I learn about Muslims the more afraid I become.

It is galling that we share the the same gender lol


We have been "learning" about muslims for the last 6 years.

I am a pretty regular poster/reader, but am going 'anonymous' for this post regarding Mrs. Clinton. She reminds me of my mother. That's not a compliment. My mom "engineers" people too. She was a very attractive woman well into her 40s and (in my sister's words) could open doors with a smile. She is a raging narcissist and enhances every story she tells in order to one-up the listener. When Hilary talks I hear my mom. They even look alike. They deflect with the same methods. I would not vote for her.

I am a Democrat but I can never vote for Clinton because she is clearly a liar. Perhaps all the candidates are liars. But if she is nominated I will have to vote for another party, or abstain from voting entirely.

Anon @7:26, your mom sounds like our neighbor, yes, even her looks! She will literally tell the same lie about a different person not 10 minutes later and will have exaggerated it in that short time!

@JenB, a huge part of the problem is people who vote only by party, not for individual candidates.
(not you, obviously; you just wrote otherwise!). The other part is our so-called leaders only care about their own party, work to block anything positive by the other party, and nominate whatever name they believe has better odds, rather than the most qualified.

Anybody who still believes Rs and Ds aren't two sides of the same coin, picking our pockets and laughing together while we obliviously scream at each other over which "side" is the good guys, is only digging us deeper into the abyss.


And I see Nurse Ratchet from "One Flew Over The Cuckoo's Nest" when Hillary Clinton
appears on tv. Then I wonder if she is medicated because her speech is so measured and slow. But then I realize that it is just an attention getting ploy.
She, like bho, lies every time she opens her mouth and speaks. And, like bho, she is so annoyed that she must deal with questions now, and her contempt always shows in her response to questioning. I am afraid she would be a despot just like bho, should she win the presidency.

Here is the real Hilary Clinton in her own words.