Davey Blackburn: The Identity of "We" 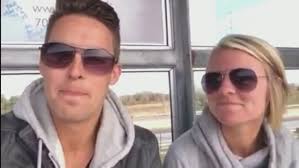 Let's being with:         Davey Blackburn has no connection to the killer of his wife.

We have been trying to learn the answer to the bizarre question,

I can tell you plainly:  guilty suspects retreat to "we" quite a bit.

Is there something so wrong with him that he uses this term, or is it just guilt?

Davey Blackburn is Narcissist Personality Disorder and the identity of "we" is Blackburn himself, and his "career", or "work" or "business" (church).  Because much of this is the antitheses of 'church', let's call it his 'company' or 'career.'  This is for the purpose of this analysis.

We now look at the statements and see if this theory fits.

If it does not, then there is an association.

This is the most bizarre murder case I have covered in Statement Analysis.

His language is the language that normally or on average, speaks to guilty knowledge of the death of his wife.

Yet, he is so driven, so obsessed with success, that he sees himself and his "work" as "one" and his wife was jealous and competed with this "love affair" to the point where he readily found ways to complain about her, justifying his own distance from her.

When she was the victim of a home invasion, she was violently raped and killed and all he could say was:  this will bring more people to my business.

"We will have to figure out how to grieve"

"We are wondering how to move on.."

Is it possible that he is so obsessed with the success of the business that he is literally using his wife's death as a wonderful opportunity to advertise his 'company'?

That his 'jesus' is his product and has little resemblance to the historical Christ of the Bible is not debated by many.

This is a man obsessed with numbers coming to his church and will do "whatever it takes" to sell his product with "the best is yet to come" phony optimism that his own language in the face of murder must match.

This, or guilty association, explains his bizarre language.

He is, perhaps, 'grooming ' his audience sexually, but this may be inadvertent, in his mind:  he may be trying to use anything he can to draw them in, as numbers equalling success including:

He does not appear motivated by financial greed, and his complaints about his wife perfectly fit his 'warning' to his 'company' that "a wife is either a sling shot..." that is, one to propel forward the "company" or "career", or...

but to whom was he speaking?

Was this message to an audience of pastors or future pastors of whom the message of choosing the right wife was pressingly relevant?

He was projecting his own dissatisfaction.

If unassociated, even if he liked Amanda, he is a narcissistic opportunist and he sees anything and everything as fair game to make Davey successful, including assigning Amanda's murder to his company's success.

He will do whatever it takes to reach 400 last year, including negatively comparing the salvation of 16 people (real to him, not necessary reality:  remember, speech is the verbalized reality of the subject; it is not reality) to the fact that a goal of numbers was not met.

About her death, he did not talk of love or Weston's loss, he could barely contain himself that "6500 people" tuned in via internet.

He thinks they tuned in to hear his message through her death, not realizing, nor possessing the self awareness that his bizarre and extremely narcissistic language makes him look so calloused that he must be involved, and people tuned in thinking to see a public crash and burn,

“It’s impossible to communicate all the emotions my heart has been forced to process. My wife was such a beautiful, gracious, loving woman of God. I have not only lost my ministry partner and support, but also my very best friend. There is no way to prepare yourself for circumstances like these. As deeply as I am hurting, I am hopeful and confident that good things will come of this. I rest in the truth of Romans 8:28 that God works all things together for the good of those who love Him and who are called according to His purpose.

“I know that in her death and legacy even more people will come to a saving faith in Christ. I know beyond a shadow of a doubt her desire for me would be to continue what we’ve started here in Indy. I hold firm to the belief that God is still good, that He takes our tragedy and turns it into triumph, and that the best truly is yet to come.”


Of this, we may ask collectively, "Who is he trying to convince, us or him?"

It is a message to use her death as a major advertising tool, making him look guilty, while he may not be guilty.

Every scripture is given a twist, left or right, here and in his performances, designed for one purpose:  build himself his own empire.  It is his first and last love, and consumes everything he is and thinks.

Crassly capitalizing on his wife's death reveals who he is, at his core.

As this trial is the worst thing a man could face:  the sexual murder of his own wife and unborn son,

all this very disturbed young man sees is "close the sale."

Here is how bizarre this is:

if not for his off-the-charts crass narcissism and possible inability to see himself separate from his company, he would have been "deception indicated" in her death.

The coincidental nature of telling us what a bad wife she was, pregnancy triggering, and his stage playing with a gun (a single shockingly bizarre theatrical prop in a long series of seriously bizarre stunts), and a short time later actually finding her dead is something separate from the language.

We could be looking at a strange incidental occurrence from one of the most twisted disturbed, talented, but possibly innocent individuals we may ever encounter.

It may be that the identity of "we" is his success or company, that he calls his "church."

It may not resemble a church to any of us, but in his warped and self absorbed perception:  it is and it is more important than anytime in the world to him.

If this is the case, he is so mentally disturbed that he is unable to separate himself from his company, the word "we", in the plural, is he and the business.

He and the business have to move on, grieve, talk to Weston, figure things out and are puzzled ,but, "whatever it takes."

If this is true, and he is mentally ill, it would explain the language.

If not true, it will appear guilty association with the killer.

The more I hear him speak, via all the posted videos, and as difficult it is to listen to him, I don't think he may be involved, and I don't think I have ever heard someone so intelligent and artistic, as disturbed and guilty sounding as Davey Blackburn.

He is actually far beyond the egotistical narcissist celebrity he refers to himself in the 2nd person.

Davey is "we" so often and for someone so obsessed with numbers, who has time for "love for Amanda"?

Something else for readers to consider and debate....

It is likely police have not released the 911 call because they have suspected him which is why they used the emphatic "100%" not involved.  It is inherently weak as "he is not involved" is much stronger.

When DNA tests return, the killer will then be thoroughly interviewed to find out if "for us, we have nothing to hide" is associated with the killer, or if it "plural Davey" in his madness.

Police likely have been just as puzzled at this disturbed young man's bizarre statements as the rest of us, and are doing due diligence to learn of any connection.