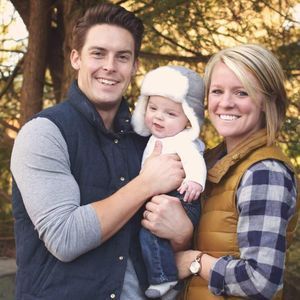 A pastor came home from a gym to find his wife a victim of a home invasion murder.  Davey Blackburn said he was at the gym when he got home and found his wife, Amanda, shot in the head.  News report quoting police say "100%" not involved and the video at the gym shows his alibi.

He released a public statement.  I am not working on this case and only use that which is in the public domain.  When I work with a case, I do not comment on the case.

“It’s impossible to communicate all the emotions my heart has been forced to process. My wife was such a beautiful, gracious, loving woman of God. I have not only lost my ministry partner and support, but also my very best friend. There is no way to prepare yourself for circumstances like these. As deeply as I am hurting, I am hopeful and confident that good things will come of this. I rest in the truth of Romans 8:28 that God works all things together for the good of those who love Him and who are called according to His purpose.

“I know that in her death and legacy even more people will come to a saving faith in Christ. I know beyond a shadow of a doubt her desire for me would be to continue what we’ve started here in Indy. I hold firm to the belief that God is still good, that He takes our tragedy and turns it into triumph, and that the best truly is yet to come.”


I do not like this statement; this is not expected, nor is it natural.

Please note:  there is nothing here of which I may conclude deception nor guilt and police have said he is not suspected.

There is no call for justice for Amanda.

3.  There is no concern for his neighbors at risk, nor himself.

He does not express fear for his life, and if his belief system means only focusing upon others, there is no fear for the community at large with such danger abounding.

There is no denial, but a quick acceptance of his wife's death.  This is very early in the process.

There is no mention of her as a mother, which is very strange since they have a child and he is now without his mother. Perhaps the subject did not feel she was a good mother, or he had an issue that was acute, about her as mother.

He does not use her name, initially, which is subtle distancing language, even though she is "my wife" and "woman,"  When he does use "Amanda" it is about her in relation to others, not to him, nor their child. "Amanda" serves everyone, but this does not include her own children.

There is a good deal of focus upon himself, and not upon his child, and how they are to survive without her.

There is no mention of the murder of the pre born child.  This is a dominant point in its absence.  To the excited father, pre born children are referenced, spoken to, have music played for, and other such to stimulate brain development.  The expectation is closeness and intimacy and this shows in language.

I find the use of "I" to suggest narcissistic tendencies, including that he begins with his emotions being impossible to communicate,  and on to the mentioning of his ministry; he is not in despair to consider  at the time of this statement, leaving or suspending ministry.  This narcissistic tendency is consistent with feeling "called" to be "different", (unconventional) which is his claim to reach people that the church does not.  It sounds noble, or modernistic, but not when measured against his own reference point; it is contradictory,  just as his statement may sound inspirational, but not at this time, without human expected emotions.

It is a statement in denial of natural affected human emotion.

This is to negate or suspend natural emotion.

I recognize that there is no allegation of wrong doing, and that he is expressing himself via faith, but the expectation is:

Deep sadness, denial, anger, etc, as well as a call for justice (which is absent) and protection for the community.

Then, there is her as a "mother", which is conspicuously missing from his statement.

It is too early for distancing language and the use of "your" is so strange given his child was present for the murder:  it does not get much more up close and personal than this.

“My focus right now is to let The Lord minister to my heart as I continue to shepherd little Weston’s.  I’ll be taking this time to focus on being a great follower of Jesus, dad, family member, and pastor to our growing church.”

His focus is on keeping his ministry and he being "great."

Please note that he is going to "let" The Lord, that is, the Omnipotent God, placing himself in control.  This is also consistent with narcissistic thinking.  This type of "front and center" within ministry becomes 'entertainment' styled:  I listened to the Marriage Q and A, he did with Amanda; it is the same style.

I do not hear anything about her as a mother to her child, and this is concerning.  The child was present at the time of the murder and he has not expressed anything about the now childless mother.  This is an expected dominant theme:  a baby is motherless and he is now responsible.  This is to say:

As a mother, he distanced himself from Amanda.

I recognize that people of faith may find this offensive, but there is a woman murdered and her husband has issued an unusual statement that does not sound to my ears to be of faith, but of false, emotional and unrealistic position, instead.

He appears to be outside or above all natural human connection to the murder, which may impress some, but is not consistent with the claim of that which he stands upon.  Since his standard is Scripture, raised by him, it should be seen in context:  It is not he, himself, laying down or sacrificing his life;  and even if he is above feeling her loss:

The mother of his child has now been taken away.  There should be, in the least, some concern expressed for this child.  The child is young, incapable of self protection and vulnerable, but there is nothing in his released statement.  Instead, grandiose faith is acclaimed for himself, with no concern, even, for his neighbors who now have a brutal killer out there.

This is of no concern to him, but his ministry is his concern.

For those who feel that this is inaccurate, see  examples from Scripture including the mourning of David over Absolam, or the mourning of Christ over Jerusalem.   Both showed natural grief.

The statement is concerning, and if he has no part in his wife's death, the concern moves towards his own refusal to face the reality of what happened.


At this point, I would not rule him out as a suspect though the news says he is cleared by police.   Police reported that it may be related to other break ins within the area.

It is an unrealistic statement and it is unexpected even in the realm of faith.