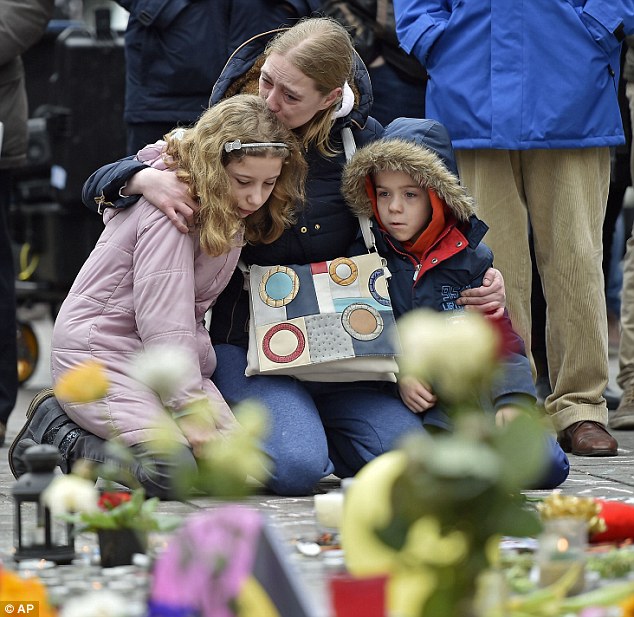 The Belgium police report being overwhelmed by Jihadists yet sent three police officers to a man's home because he tweeted something about Muslim school children applauding the death and carnage of Brussels.

The President of the United States spoke for 51 seconds and did not mention the word "Islam" in his speech.

Each time Islamic terrorists kill (more than 1,030 dead  in the past 30 days), Obama scolds Christians and says Islamic terror, as  taught in mosques around the world, from the koran, is not Islamic.

ISIS released a propaganda video with using Donald Trump's quote about Brussels being beautiful and safe 20 years ago but a "horror" now.

The president has repeatedly stated that Islamic terror is not Islamic.  Although the killer confesses his motive, the POTUS says otherwise.

The BBC reported the deaths and avoided any link between Islamic terror and Islamic belief.

The world continues to cower before this ideology, fearful of even naming it.  With no visible leader, and 1400 years of prescribed and fulfilled violence, Sharia blasphemy laws forbid criticism and thus far, many world leaders willingly submit to the Sharia mandate.  See if you can find the motive in the words from ISIS.

Here is the statement from ISIS in English:


“The regulations of Jihad in the cause of Allah are clear and there are no reasonable doubts about it. And Quran has decided waging Jihad against the disbelievers until they give the jizyah willingly while they are humbled and the Islamic State has asked them to give it but they refused.”
“Yet the Crusade jets including the Belgian are still bombing the Muslims in Iraq, killing children, women, old, and destroying mosques and schools.”
“But the calamity is the exile that the people of Islam live at tip most of them managed to deny jihad against the disbelievers and deny the blessed forays in Crusade Europe and other places, including the last foray of Brussels.”
Peter Hyatt as Statement Analysis Blog at 2:02 PM

And Quran has decided waging Jihad against the disbelievers until they give the jizyah willingly while they are humbled and the Islamic State has asked them to give it but they refused.

Is this the motive? What is the jizrah they want exactly? Is it to be an Islamic state? Have they asked the leaders directly to give in to their demands? Do they want other countries to allow as many migrants as they can send? Do they want money? Don't the oil countries have more than enough money for everyone to get an annual check of millions? Do they just want the world to bow down? If Isis got their way and the whole world was suddenly and Islamic state, would they stop the terrorism? I think no. They would then fight amoungst themselves.

They want the nations out of their homeland.

Wheres the photo of former Pres Bush (W)reading a book in classroom of children while NYC burned? Thats when this horrible mess accelerated.

To anon at 5:50,
As an American, I would be willing to leave their homeland. Bring our soldiers home today. Let them figure it out or duke it out or whatever. I think it was kinda foolish of us to think we could turn around 2000 years of ideology and turn them into a democracy. Especially when they didn't want it. Things really went downhill from the invasion of Iraq.

I dont understand why I got severely criticized and met with rage for simply stating on social media that the President should have come home to lead and should have addressed the problem by giving a speech and offering reassurance and some comfort to the families of the dead/injured. The overarching opinion of the angered was that the president should just "ignore" terrorism. What a messed up world!

Recently I was reading a book and in it I came across the description of the brain being a "discounting mechanism". As in, you buy a fabulous diamond necklace and you are over the moon with happiness about it. As time goes on, the necklace still makes you happy, but your enthusiasm wanes. After much time it becomes, "oh that old thing". Then the character goes on to relate the same thing in regards to a negative emotion like a cracked windshield. You're very upset about it when it first happens, but then you learn to see past it as time goes on. i.e., you don't have the money to repair it right away. Then somebody references the damage to your windshield but you're like, "what do you mean", because your brain has discounted it.

I think that's what the politicians want the populous to do. They want us to stop clutching our pearls and accept or discount what is happening as a common event.