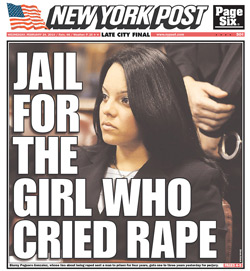 Sexual abuse cases are statistically on the rise in Europe and in the United States.

In Europe, various attempts have been made in the last two decades to deliberately underreport such claims and discourage victims from coming forward.  This is the opposite of the narrative given which promises safety and egalitarianism.

Rape destroys the victim's life and its impact is felt by many.  False allegation of rape also can destroy an innocent life, and impact many, as well.

An investigator must discern if a report of sexual assault is authentic or if it is fraudulent.

This is an awesome civic and moral responsibility.

Training in Statement Analysis will cause the investigator to be able to discern between a genuine report and a fraudulent report.  With the written statement made before the interview, the investigator trained in analysis should know 100% of the time.

Yet, this is not all that is trained.

The investigator/analyst is responsible for learning that if a false report is made, what is the motive?

Has a crime been committed in making a false report?

An example of this work is in studying Bi Polar Disorder and Borderline Personality Disorder in Statement Analysis.

What does the language of a 'borderline' look like?

What stage does a Bi Polar make the false report?

Can we pick up acute personality disorders in language?

How does this impact our interview strategy?

It can be evident by a single word in the statement that comes after the allegation of the assault.  One single word can alert us to this very thing.

Revenge can be abandonment driven, or it can be an even deeper maliciousness showing great callousness towards the life of the accused.  In some investigations, attendant crimes existed.

Conversely, victims of childhood sexual abuse with PTSD-like symptoms and disassociation also make false reports but not for malicious motive.  They sometimes even perseverate from childhood sexual abuse and misinterpret the sex actions, and can even assign a past event to a present event as a result of trauma.

This, too, can show up in the language and clear the innocent.

Some investigators, of great conscience, attempt to facilitate professional intervention for such victims.

I have to separate these for the context of investigators.

The Dept of Justice reported many years ago that of those who stole from their companies, more than 40% planned to do so before hiring.

Remarkably, this theft does not include the fraudulent claims of injury, discrimination, harassment, and other such "gaming the system" that is both complex and very successful today, as more courts see success as "privilege" and demonize hard work and achievement.

The US federal government has greatly increased the limitations of questions companies can ask in order to hire 'the best and brightest', while they, themselves, are exempt from such.

It is "you need to hire the felon, but we do not" with the "do as I say but not as I do" mentality in practice.

If you follow the news, this is going to get worse.

You cannot, for example, not hire someone who is mentally ill, even though the government that mandates this will exclude this same applicant.

Statement Analysis training gets to the truth of applicants, including intent, stability and credibility.

If a position, for example, requires longevity and professional boundaries, analysis can show the personality of the applicant.

Some people move from job to job because they are forever improving their lot in life; while others never move past a one year "honeymoon period" due to personality.

In law enforcement, screening out those who should never carry lethal force is left up to questionnaire check offs and the result of bullying has more than just the deadly consequence.  In more common settings, it is a morale issue and a community relations nightmare to have an officer who shows acute need of respect.  This officer will not possess the faculties (nor desire) to talk someone down who has insulted him.

Statement Analysis training will bring you from discerning truth from deception, serving the community at large, and fulfill the very motives you had for going into police work.

As you learn to detect deception, your journey has just begun.

With our complete Statement Analysis Course, you are given:

1.  12 months of ongoing support.  Your work is checked, help is given and you will, if assisted, not submit an errant conclusion.

2.  An invitation, free of charge, to a live online training with some of our nation's best investigators and analysts.  This confidential training is highly addictive and allows the investigator to see how thorough the analysis work actually is.

3.  Access to Advanced Training.   Successful completion of the Statement Analysis course (in your own home at your own pace) qualifies you for the advanced training.

4.  Certification.  Successful completion of the course, along with a minimum of 60 hours of live analysis training with other professionals, and the recommendation of 3 analysts, you will be awarded "Statement Analyst I" accreditation.  For those with professional licensing requirements, CEUs are awarded through the University of Maine and are accepted nationwide.

Tuition is $595, all inclusive, and monthly payments are available.

See our new website at Hyatt Analysis Services and contact us to get started today.    We ship the course out immediately and the support means that your first statement taken will be analyzed with and for you, as you slowly learn the insights into detecting deception.
Peter Hyatt as Statement Analysis Blog at 10:29 AM

"The Murder of Amanda Blackburn" conclusion up next...

Next: coming immediately after; the next thing.

I have a very good example of a power-trip. My son came home and told us that his friend got pulled over for going one mile over the speed limit. My first question was... was he on campus? He didn't know. He shared this with dad whose first question was... was he on campus? We have two colleges in our area and the attitudes displayed by the security/policing personnel tend to get a bit nit-picky and notorious. So, my son asked and you might never, ever guess where his friend was pulled over at ... He was let go with a warning (after being polite which was most likely why it only became a warning) since even campus authority might have grimaced at her nit-picky-ness. Or, possibly promoted her. Too close to call.