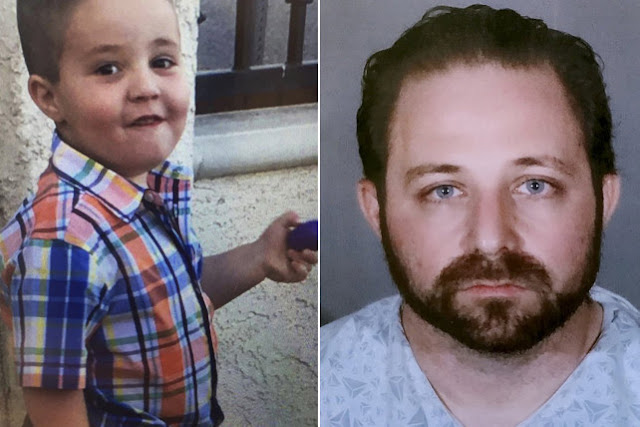 The father released this statement through his attorney:

“I am desperate to find my son, Aramazd Jr., and need the public’s help. I hope and pray for the safe return of my only child, my namesake, who has been missing since last Saturday morning, April 22nd,”

It is interesting to note that the language of concern ("desperate") regards the father, himself.

It is also interesting that the boy is his "only child" and "his namesake", with emphasis upon the father, himself.

These references point to the father, not the son.

If the attorney wrote this statement, it would show the attorney's concern is about the father, not the son.


In the statement, Andressian Sr. said he last saw his son on Saturday morning at Arroyo Park near his South Pasadena home.

“There has been a great deal of speculation regarding the timeline around his disappearance. The last time I saw my son was on Saturday morning, the 22nd, at Arroyo Park near my home in South Pasadena. After breakfast Aramazd Jr. wanted to go to the park before we were to meet his mother for a custody exchange at 9:00 a.m.”

Note the use of the name "Aramazd Jr." and not "he" after already introducing him as "my son."

Andressian Sr. was later found passed out at the park; the child was reported missing by his mother after the two failed up to show up at an arranged meeting point that morning, authorities said.

The passive voice employed here is of concern.  It does not begin with the pronoun "I":

Missing 5-year-old Aramazd Andressian Jr. is seen in family photos released April 24, 2017, by L.A. County sheriff’s officials.
“In one moment, I was at the park with my son, and then I found myself waking up in Huntington Memorial Hospital hours later. I was told that a good Samaritan found me unconscious on the ground near my car, with young Aramazd nowhere in sight. I can only speculate that I must have been attacked in the park, given my unresponsive state and subsequent physical condition.”

Note no concern for the child, but lots of details about the father.

Even with an attorney prepared statement, the focus is not on the missing child.


Peter Hyatt as Statement Analysis Blog at 8:30 AM

As soon as i read this, my deceptive alert went off. How convenient the dad was found unresponsive. He comes across as a victim and responsible for nothing. He doesn't sound alarmed about his son allegedly wandering around alone in the park. I think this dad is deceptive and covering up for whatever happened to this little boy. I wonder when he mentioned to the rescue team that his son was missing. Or if he ever told them.

Thanks for this, Peter!

Andressian, Sr.: "I can only speculate that I must have been attacked in the park, given my unresponsive state and subsequent physical condition."

A Few Questions- Thinking about other teaching statements, when a subject introduces "I can...", means there are other things the subject could tell us, but he is unable to tell us those things for a reason (as in, unwilling)? Is that similar to using "just" because our subject is comparing two things and consciously choosing which one he will allow? So, qualifying that further with "only" ("I can only..."), makes that doubly sensitive?

Andressian, Sr.: "I was told that a good Samaritan found me unconscious on the ground near my car, with young Aramazd nowhere in sight.

Why is he concealing who told him and why does that matter enough to him to conceal it? The phrase "young Aramazd" is not only distancing for a parent, but a storytelling element (i.e. designed to elicit an emotional reaction from the reader). Coupled with my only "child" and "my namesake", all of this says this father isn't emotionally bonded or attached to his son. He makes himself and his needs the priority, then moves to possess the boy with "my son" ("I am desperate to find my son, Aramazd Jr.,...) with no attachment to him except as a possession.

Gerry looks like a nervous wreck. Also now claiming that stranger abduction is very rare - that's a rare bIt of back peddling on the 'thousands of child abductions' every year claim.

Since his self-references indicate this possibility, he would probably say "I was told..." to avoid identifying anyone who could take the public attention away from him.

I think the phrases "young Aramazd" and "Aramazd, Jr" are actually self-references. He's giving a shout-out to himself. Keeping the focus on himself.

I've seen several instances with 2 people I know, and on Dateline-type shows, where the parent, having obvious narcissistic/sociopathic traits, ended up referring to his/her child as "mini-me" or something very similar.

The child is an extension of the narcissist, not his own self, or that of the victim-spouse. It's like "taking credit for" the child's existence.

If a person with NPD loses control over the spouse (aka divorce), the N stops at nothing to get sole custody of the children. The purpose is for revenge, punishment, and a further control the spouse. He must hate that she has partial custody so he has done something with the boy to ruin his ex's life. It's a game he has to win. Narcissists have no emotional attachment to anyone, and children are merely a bargaining tool. There's no telling if he hired someone to take the boy, or killed him himself. I wonder if the boy made it to the park.

Too convenient the boy happened to want to go to the park, then happened to disappear, and his dad happened to not recall anything. And right before his ex was to take the boy.

The focus is on the father's alibi, not the well being of the missing child.

The father's next concern is describing an acceptable closeness between himself and his only son, who is named after him, to designate a special relationship.

The oldest male child, who is named after the father, is usually the child who takes the brunt of the abuse from the father.

The father's memory failure is another avoidance mechanism to fend off questions that might reveal the truth about his son's fate.

"Ash me no questions and I'll tell you no lies" is the mantra of the guilty.


Ugh.
Father's statement does not bode well for young namesake.
Way, way, too many times we see this.
Law enforcement can only capture the guilty,
after the act.

"I am pleading with the public to come forward with any knowledge of Aramazd Jr.’s whereabouts or information regarding the circumstances leading up to his disappearance.

Thank you in advance for your cooperation. Please continue to pray for Aramazd Jr.’s safe return.”

The father can't have anything to do with the boy's disappearance, and I say that because just these last 3 paragraphs of his statement show that he obviously is intelligent, responsible, professional, polite, and gives ALL the pertinent contact information to report information to help find the boy. And just look at all the big words he uses, so he's clearly superior to the average person.

I was being sarcastic above. My real thoughts while reading the father's statement were that it appears to be filled with smoke and mirrors. Whether or not it is, it sure comes across that way.

It's interesting how the forms of deception can make the lies more conspicuous, which is the opposite of the intended effect. Ha ha! Hey look at that guy dressed like a tree standing in the bushes over there!

"Thank you in advance for your cooperation."

Here, let me just quietly assume the role of "the authorities" and no one will notice.

He wants information regarding circumstances LEADING up to his disappearance.

I don't hear him pleading for anyone to help search.

This child is in heaven , IMO, things missing in this statement are the fact the father took the son to Disneyland Friday night,and they didn't leave until after midnight, and the father was seen at a lake starting early Saturday thru mid afternoon without the son. The park and lake have been searched as man as four times! R I P little man xx

Did maybe the boys mom see the dad passed out and take boy? Is drugs involved? I hope mom took him.

"Andressian, Sr.: "I was told that a good Samaritan found me unconscious on the ground near my car, with young Aramazd nowhere in sight."

In an article I read, the boy had a scheduled skype session with mom and that is the last she heard from him. The boy was also supposed to skype with mom on Thursday, but he did NOT. Then Saturday, missing boy.

Sounds like something happened to the child between Tues and Thurs. Missing report not till Sat. If dad is responsible, he had a huge head start on covering his tracks.

Jay: Man dressed as a tree standing at the edge of the forest will give us all the information we need about the incident. Man dressed as tree by forest will politely and professionally direct us all to cooperate with the investigation. Thank you in advance for your cooperation.

Reminds me of that Woody Allen movie "Zelig" where the main character quickly quietly smoothly changes into an identity to match and blend in with those nearest to him. Taking on the voice of law-enforcement, etc. And the funny part is that instead of making me look away (his objective), it causes me to LOOK at him because it's so obvious! "Thank you in advance for your cooperation." HA HA!! Okay, so now he's thanking us all "in advance" for our "cooperation"?! Well, he's now literally near law enforcement and authorities, he's giving a statement, so why not just slip a little way to the side and hide among them? Yeh, that's the ticket! I'm gonna just slide a little this way and start talking like them! No one will notice I'm wearing a tree-suit here, standing among all these trees!

What is the criteria for deeming a statement "not expected"? Not expected by whom? Because of what? Does the "not expected" tag vary from analyst to analyst?

Anonymous said...
What is the criteria for deeming a statement "not expected"? Not expected by whom? Because of what? Does the "not expected" tag vary from analyst to analyst?

Many decades and many statements create a data base.

As cases were studied, reactions fell to one side or the other. This is true of polygraph study across the western world for decades:

There is no "gray" area in-between.

It is as obvious as one might think it is. We go by percentages (odds) so, for example,

When a parent is misleading police, extra words are needed to persuade, while the simple obvious "my child is kidnapped" is avoided.