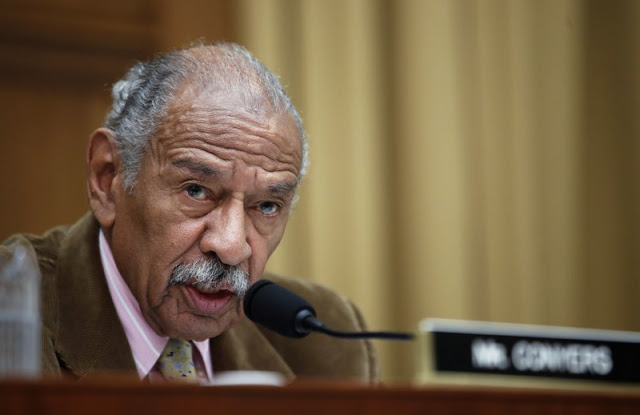 The AP asked Michigan Rep. John Conyers  if he paid settlements due to sexual harassment.  A woman claimed she was paid a settlement after being terminated from her job because she refused to have sex with him.

Conyers told The Associated Press that he hasn’t settled any sexual harassment complaints with any staff members.  They do not give us his quote.  This is now reported throughout media:  "John Conyers denies..."

Conyers, who answered the door at his Detroit home Tuesday morning, says he knows nothing about any claims of inappropriate touching and learned of the story just hours earlier.  It would be interesting to learn if he said he "knows nothing."

Referring to allegations of sexual harassment and assault being made against politicians and others, the veteran lawmaker says he’s “been looking at these things with amazement.”

This is, for now, all we have to go on.  The word "these" indicates closeness, which could be chronological closeness since this was just announced.  It could be closeness for other reasons, but this would only be guess work.

We do not have a quote to analyze but we do have a short quote about his emotional reaction.

One might consider why the AP did not report the direct quote of denial to its outlets.

BuzzFeed reports that Conyers’ office paid the woman over $27,000 to settle the complaint under a confidentiality agreement. BuzzFeed also published affidavits from former staff members who said they had witnessed Conyers touching female staffers inappropriately or requesting sexual favors.

Congress’s Office of Compliance has paid out $17 million of our money over the past 2 decades in settlements that include sex harassment cases. However, that’s not where the cash came from to hush this Conyers employee. She was paid off with around $27,000 of taxpayer money, but it came out of Conyers’ office budget. Deceptive accounting practices were employed to cover up the scandal.

The inclusion of his emotion is part of a "need to persuade."  It does not make a conclusion, but it weakens his stance.

First, the emotional response from one with no connection is expected.

Secondly, the context is important:  there is an avalanche of allegations in politics and Hollywood today.  Some accusations may be true, and others false.

There is no congruence in "amazement" given our context. There is also the question of "This is necessary to state...why?"

We will need a complete statement from John Conyers to analyze.

Peter Hyatt as Statement Analysis Blog at 11:33 AM

'Vehemently' Denying
DOESN'T cut it either!

Too BAD, Mr Conyers!
You AREN'T Fooling me/us & Chances ARE, You PAID out 'Hush' Funds, in Hopes to HIDE & Further SILENCE your 'Dirty Deeds & Dones'!