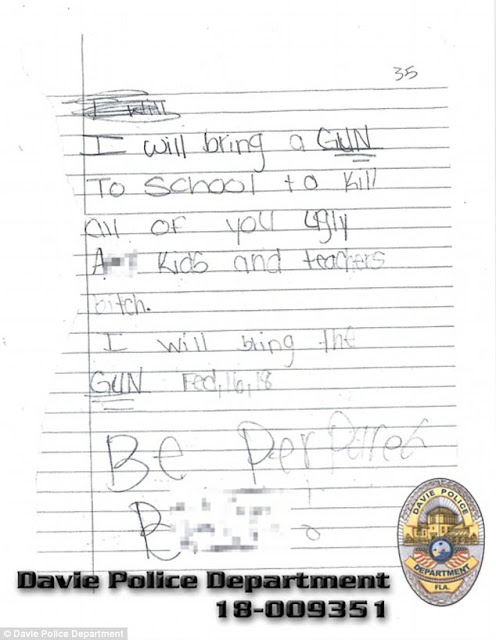 This is publicly released information from the police department.

When we communicate we reveal four things about ourselves:

Here is a short hand written note of a threat.

Statement Analysis not only can access the threat level, but also give insight into the author's priorities and personality.

This is often seen in the many "fake hate" posts of deception you may find here at the Statement Analysis Blog.

We note several things about this threat:

We measure the strength of the commitment.

"I will" is crossed out and re-started. This author has a need to be heard (frustration, likely being reduced to status of "no consequence" to others).

"I will bring a GUN" linguistically commits strongly with the pronoun "I" and without any qualifications (negotiation) added.

The emphasis of the capitalization is noted that this writer (most often male) has a need to be heard and believed.  Generally, this is considered a weakness because we discern it within the language.

Here, the weakness is not in the wording chosen.

Unless interrupted, this subject (author) intends to do what is stated.

Note that the writer has a need to be heard and believed but is firmly committed to this action.

Should the author experience humiliation of some form, it is likely he/she will carry this out.

this is the actual wording (not sarcasm, nor interpretive positions) towards the potential victims.  The author wrote:

This is a "negative linguistic disposition."

Recall the fake hate letters where the "KKK" is polite?  This is what a negative linguistic disposition sounds like.

"Be Prepared Bitches!" is a "positive linguistic disposition" in spite of the word "Bitches" because the language chosen has forewarned the recipients.

This is an indicator that the author may be female, rather than male (more females show human empathy than males in anonymous threats) and is a "pause" towards carrying out the next step of the threat.

What is the threat?

The threat is to bring a gun to school.  This is something the author is committed to.

The author tells us "why" but it is not a threat to shoot others.

The author has very likely been hurt by a fellow student's contact with a teacher, with feelings of betrayal.

The author is strongly committed to bringing a gun to school, but to use it is something different.

Once at school, if she were to experience something very humiliating, she could open fire.

She is seeking attention, desperately, and it is likely that without intervention, she would bring a weapon to school.

The threat is not to shoot, but to obtain attention by her commitment of being seen with lethal force.  This indicates that the author has been deeply frightened and humiliated.

The threat to bring a gun to school is high.

The threat to shooting is not,  but the assessment is:

1.  at the time of the writing/delivery
2.  without possible trigger (humiliation) that she could experience while with a gun.

The author is conflicted and she is not sociopathic.  She has human empathy and is seeking attention. It could escalate.

She lives in a day where she grows up with Hollywood and music entertainment's message:  if you are insulted, violence is the remedy. We also see, culturally, an acceptance of violence among females, including for "entertainment" purposes. In some music cultures, sexual activity and violence is routinely linked.

11 year old girl arrested for putting this note under the principal's door.  Recall she added "teacher's bitch" (singular).  The news reported that she claimed in a written confession that she was made to put the note under the door by another girl, who said she would get her friend to fight her if she didn't.

She reliably reported what she intended to do:  bring a gun to school.

Guns are readily available to illegally obtain if one can get money.  If she was able to obtain a gun, she intended to bring it to school.

That she showed empathy enough to warn the recipients indicates that she did not intend to use it.  With good family support, she could respond positively to professional intervention.

The danger is in someone possessing.  Should it be loaded, the unpredictable possibility of a humiliation trigger, such as a physical fight between girls, could thus cause her to use it.

For training in Statement Analysis:  www.hyattanalysis.com


Peter Hyatt as Statement Analysis Blog at 9:12 AM

Yes! Thank you for calling out the violent thugs of the left for what they are! Liberals and their whining about guns and the NRA when the Hollywood elite are to blame for our culture! I'm so glad we have a President who denounces violence and stands for what is right. God Bless you, Peter!

Today i was listening to the news when suddenly there was a topic about the Shooter. It said that his laywer said the boy was "confussed".
If he indeed posted the message on that message board (i believe general posted a link of the article, where some person had contacted the fbi after reading it on his message board)........i would think it is that person, its to much of a coincidence that the name of the person who wrote the message on that board is the same name as the person who now has shot 17 people.

Of course are these people somehow "confussed", nobody in its right mind will walk into a school and shoot a dozen (or more) people. But it seems like he knew exactly what he did......there was enough time between the writing and the actual shooting.

The threat to bring a gun to school is high.

Yes, she begins with "a" gun and in closing, she writes "the" gun. This could be an indication she has a specific image of a gun she has seen before and may have access to in some direct or indirect way.

Is this a test? She clearly states to kill all....

The defense attorney for the shooter revealed something personal about herself.

Did anyone catch it?

There could be a gun in her household she can gain access to so many have guns in their homes for "protection", unfortunately many of those end up being used in tragical accidents and innocent people (children) get killed.

Did the attorney reveal something about herself or about the shooter? I AM nog sure if i got the question right

something personal about herself

The defense attorney for the shooter is a man named Howard Finkelstein; the prosecutor is a woman. Which do you mean?

This?
“ “There is no way anyone can minimize the tragedy of what took place,” said Finkelstein. “It’s time to mourn; it’s time to figure out how to prevent future tragedies. He should spend the rest of his life in prison, but he does not deserve to die.”

"This kid didn’t have to fall through the cracks. He screamed for help, and we failed him,” Finkelstein said . “He should never go free. Let him plead guilty and send him to prison for life.”

this?:
Public Defender Melisa McNeill: "He's a broken human being. He's a broken child... The sadness that this community is feeling. I mean, my children, they go to school in this community. I feel horrible for these families, and Mr. Cruz feels that pain."

If this is the this^?

What i noticed when i heard his attorney speak was state that he was aware of his impact on the community. I believe her. He is anything but insane and I hope her words backfire if she goes the route of insanity plea.

She had to have a conversation that many parents had “with” their children. She’s apparently a bad lawyer AND not too close to her kids, poor things, alshe probably doesnt treat them good either.

The use of the word "child"?

"The news reported that she claimed in a written confession that she was made to put the note under the door by another girl, who said she would get her friend to fight her if she didn't."

It doesn't say she wrote the note, but rather put the note, perhaps written by the other girl, under the door. It would be interesting to see other writings from both girls as a means of comparing.

If the 'girl' who made her put the note under the door with threats of a friend fighting her was actually real, then I could see her being the one who wrote the note as the note is worded as a wanna be thug would write and speak.

Does the 11 year old girl who confessed actually talk like the note was written? Does she have a learning disability? due to the lower case b and d being reversed.

She lives in a day where she grows up with Hollywood and music entertainment's message: if you are insulted, violence is the remedy. We also see, culturally, an acceptance of violence among females, including for "entertainment" purposes. In some music cultures, sexual activity and violence is routinely linked.

^^^
I disagree. The cultural aspect of this case is not the influence of the things you listed. It is not influence, but rather shithole country mentality. Nonwhites are not as intelligent and do not have the capabilities to be educated to a level of thinking where violence or striking out is the only answer to fear and/or towards things they do not understand.... it is the reactions of a lower life form... animal instinct.

And as for all the major companies disassociating from the NRA.... this failure was not the result of the NRA. The blame lies on other institutions. Boycotting the NRA will not lead the answer to this problem.

Girl: I will bring a gun to school to kill all of you ugly...

Ph: The author tells us "why" but it is not a threat to shoot others.

She says to kill of of you. How is this not her serious intent to shoot others????