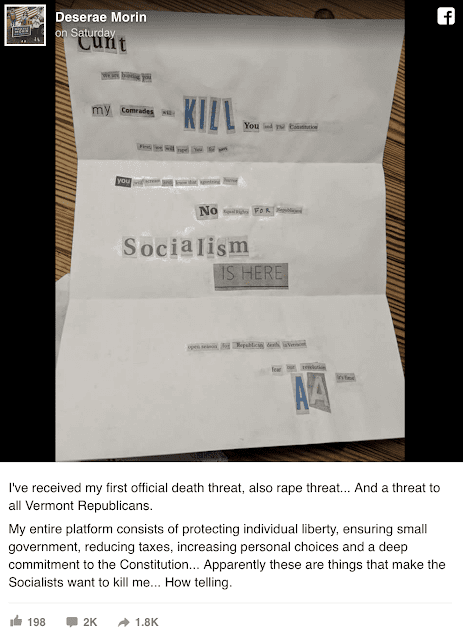 Is this a genuine threat?

Violence is upon us and the violent language of the Elite is increasingly hostile.  The capital baseball game shooting is the greater context for the violence. The language of Hollywood Elites, as well as politicians such as Maxine Waters, Cory Booker, Eric Holder and Hillary Clinton stands in stark contrast to Michelle Obama.

The former First Lady said we should not be creating an atmosphere where are children live in fear of their neighbors.

We look to first identify the threat and then to note the linguistic quality (commitment) by the author.

Did you notice the distancing language from the threat to kill with "my comrades"?


Is the terms "Republican, Socialism, Comrade" etc, a form of masking? If it is so, the author may be a Republican and not a socialist.

What is the author's message to the "Unintended Recipient"?

Police should begin asking the recipient if she would take a polygraph.

From there, they can work her circle of supporters.

Genuine threats use straight unqualified language. She called it her "first official" threatening letter.  She expects a second?  What makes this one "official"?

I believe her when she said the following:

"I knew on some level I’ve made contact with this person. They’re somewhere in the vicinity, geographically speaking. And that’s unsettling."

When she says "my first official death threat" not only does she indicate an anticipation of a second, but the powerful pronoun acceptance ("my") of rape and murder shows ownership.

This is not expected.
Fake Hate for political exploitation?


My thoughts at You Tube.

Peter Hyatt as Statement Analysis Blog at 11:18 AM

My first impression of the note was that it has a "stereotypical 1960's Movie ransom note" feel to it, with the cut & paste letters.

Someone went to a lot of trouble to do it this way, and it seems very theatrical.

OT: a very personal and brave comment left. It’s inspirational in its honesty.

The political context seems superficial (“buzz words”) and disconnected from the “threat”. The writer doesn’t have a direct political agenda, or, it’s masked. The most curious statement besides buzzwords is “no equal rights for Republicans”. While there’s no doubt feminists spew ire at Republicans, it seems curious they’d take a term they embrace and use it in this negative way. It doesn’t seem to criticize republicans as much as say something to make republicans feel slighted or mistreated. That’s the agenda.

Further, the candidate saying “my first official” to describe a threat of raping her for days? She knows the threat isn’t real.

And to add- an agenda of making Republicans feel slighted or mistreated is reinforced in her comment that quickly shares the threat with “all Vermont Republicans”.

^ That’s the message for the “unintended recipient”.

Thank you for the video explanation. Fascinating!

Deserae Morin seemed guilty to me
Thank you Peter

Police likely have begun with the recipient. I didn't go into it fully about it, but the description of raping after killing is female.

The author has likely experienced her own trauma.

Having said this, it is difficult to discern between female and effeminate male in language.

Probably someone from Drama Club. Likely Robert DeNiro. He's made threats before.

We have inkjet printers, now. And everyone should know how to use them. Why would you make a letter like this? And why is she still in possession of the letter? Shouldn't the letter be archived as evidence?

Calling it “official” gives it a sense of legitimacy. Why would she need to call it that when the expected focus would be the starkness of the threat?

It's been, like, the worst weekend ever -- it's been really rough," Morin said. "I was just in shock. I just kind of held it and paced around the house for a little bit just reading it, and reading it again trying to decide what do I do with this?"

"It's kind of in line with what we're seeing all over the country right now, but I never expected that i was gonna get that or it was gonna happen here," she said.

She "never expected" that she "was gonna get that" or that it "was gonna happen here" right up until the time she composed it and sent it to herself, I guess.

“I’d expect “what do I do about this?” But her focus is on the piece of paper more than the “threat” within.

She sounds somewhat pleased to have “received” her “first official death threat”.

She takes ownership of “my first official death threat” - which she “received”. One receives letters, gifts, and visitors - to ‘receive’ is often associated with welcome or gracious acceptance. It may be more expected to say “Someone sent” - or “I have been sent, or delivered, a death threat”.

’Also rape threat” seems like an afterthought, out of logical sequence, as in the letter. She could be repeating threats in the order stated, or it may be she also wrote the letter, and that’s the order in which she thinks.

’Small’, ’reducing’ and ‘increasing’ are like the size of the cut-out letters.

‘Apparently” - she leaves room for questioning and doubt that these things make “the Socialists” want to kill her. (All of them?)

“How telling”… yet it is she who is outlining her “entire platform”, as the motive, for “the Socialists” apparently wanting to kill her.

In the note itself: “my Comrades will KILL You and The Constitution” - she must be considered very important by the official death threat maker, to be placed ahead of The Constitution.

“Socialism is here.” - the ideology of those making the threats, “the Socialists” - is here - the one making the death threat is “here”?

The cut-out newspaper words and letters, along with 'comrades' and 'revolution', are like a throw back to another age.

The writer intends to shock and to cause fear, and in publicising the “official death threat”, the recipient intends the same. She shows no fear, rather a strange pride, in having “received my first official death threat, also rape threat” - (and for good measure?) “…And a threat to all Vermont Republicans”.

Fake fake fake. She or someone she knew probably made this for attention. Negative attention is still attention. Now she's on the radar.
AA = attention addict.

"My first official death threat", this is where I stopped reading for the first time.

The word "official" brings a humorous, sarcastic, self-congratulatory tone to the threatening comment.
As reader I am confronted with an inconsistency right there:
Do I believe the sarcasm that belittles the meaning of what follows or the upsetting threat in the wording.
I chose the former one.

The writer boasts over the fact that she is now (finally) someone important as she, too, has been honored with a threatening message.

"Official" is in the first sentence. It is of top priority for the writer to convey the message of her becoming, by this letter, one of the important ones.

"Official" as a choice means the writer thinks of an office where these kinds of threats are manufactured and from where they are sent to recipients. And, the recipients are chosen by the office according to their importance.

The writer could have chosen some other expression than 'official', or leave the word out altogether.

Could the word-choice 'official' mean, also, that the recipients are chosen by the sending office according to their official importance?

Where is the finger pointing at?

Agreed. Also many Millennials would be unaware of this kind of copy and paste it's like a bad movie scene.

You make a very good point, especially in you last paragraph!

Could someone help decipher the level of this threat?