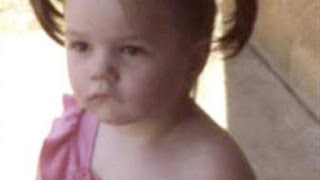 Statement Analysis:  Mother deceptive about what happened to Aliayah.

Her mother is in prison for welfare fraud. Her stepfather is lying low. Her six siblings, some just infants, are in the custody of child welfare authorities. And Aliayah Lunsford, the brown-eyed 3-year-old who vanished from her West Virginia home a year ago Monday, is still missing.
"It just seems like everybody's forgotten her," said Aliayah's great-aunt Vickie Bowen, "but we're never going to forget."
In the year since Aliayah disappeared from her family's rented house in the Bendale section of Lewis County, Bowen has concluded the girl is probably dead, though she avoids using the word.
"But we still need to know. We need that closure," Bowen said. "We need to take care of her."
Aliayah's mother, Lena Lunsford, told police her daughter was in bed, wearing purple pajama pants and a pink sweat shirt, at 6:30 a.m. Sept. 24, 2011. But she said the child was missing when she checked on her a few hours later.
Six months later, an FBI official said investigators had a working theory about what happened — and it didn't involve a break-in. The agency has since refused to say what agents believe happened to Aliayah or whether they think she's still alive, though it is offering a $20,000 reward for information leading to her recovery or an arrest.
Authorities have made no arrests and named no suspects, only describing the people of interest as "a small universe."
Lewis County Sheriff's Deputy Lt. David Parks declined to discuss details of the investigation this week and referred questions to the FBI, which didn't return several messages. However, local authorities have put information about Aliayah in a brochure for people attending a hunting and fishing expo this weekend.
"It's something that stays in our minds all the time here," Parks said. "It's not something you can forget: There's a little girl missing."
Parks said the case is still active and tips are still coming in, though relatives complain they've had no updates in months.
"If there were more to do, we'd be doing it," he said. "Unfortunately, right now we're doing what we can with what we have."
Aliayah Lunsford's case has gotten little attention beyond the boundaries of her small home state, failing to resonate with the public in the way that Caylee Anthony's story did even though both girls were toddlers with chubby cheeks and brown hair.
The body of the 2-year-old Florida girl was found a month after she was reported missing in 2008. Anthony's mother, Casey, was charged with murder after telling a string of lies to police but was later acquitted.
However, Aliayah's case is different in several ways: Neither the immediate family nor the police sought national media attention. Investigators have been tight-lipped about the case, the family and their working theories from the start.
Aliayah's parents were also poor, and their family relationships were splintered before the girl vanished, so there has been no prominent spokesman.
And Aliayah has never been found, dead or alive.
The girl's mother was indicted weeks after Aliayah's disappearance on charges she illegally swapped welfare benefits for cash five times in two months. She was sentenced in May to eight months in prison after pleading guilty to selling $114 worth of credit on her food-stamp card for $50 cash and reported to prison in late June.
Attorney Mike Woelfel, who has represented Lena Lunsford in unrelated civil matters, has said Lena doesn't believe her daughter wandered off and has cooperated with investigators. She's also certain "no blood relative of Aliayah knows what has happened to her," though Woelfel has never elaborated.
Woelfel said he spoke to Lena Lunsford on Friday, and she told him she still believes "Aliayah is out there, alive."
"She's told the FBI everything she knows," he said, "so she's basically powerless to do anything other than sit and wait."
Lena Lunsford filed for divorce from her husband, Ralph Keith Lunsford, after her daughter's disappearance, and is still waiting for it to be finalized. She'd been ordered by a judge to live apart from Ralph after he acknowledged buying and using synthetic drugs called bath salts.
Both parents have repeatedly refused to comment on Aliayah's disappearance, but in a court proceeding, Ralph Lunsford acknowledged police had considered him a person of interest and repeatedly questioned him in the case.
Lena Lunsford gave birth to twins after Aliayah disappeared and before she went to prison. Bowen, their great-aunt, has never met them. Nor does she know where the other children are.
"Until we find answers for Aliayah," she said, "there's no chance of seeing them."
After a year with no solid leads, Bowen is frustrated — but she and a group of about 10 people still search regularly for Aliayah.
"If we hear anything, anything at all, we're there. No matter how unbelievable it seems to us, we go check it out," she said.
On Monday, Bowen and others will plant flowers near the welcome sign in Weston to honor Aliayah. They'll distribute flyers with her picture and post them at area businesses. They're even planning a small afternoon demonstration at the Lewis County Courthouse.
"We're not giving up," Bowen said. "There's no way we're going to give up. A child does not simply disappear."

Peter Hyatt as Statement Analysis Blog at 6:40 AM

If the author of this article would check facts, then statements would be deemed at least a bit more beleivable.

The Flordia toddler used in comparison in this instant was missing for more than a month. It could have been only a month, but no one wanted that outcome to happen.

This particular toddler would have little resale value as many children there are in the family, location (morons trying to make fools of themselves are likely to be gunned down or at least loose their camera equipment),and little hearsay of drug use over a few bucks.

No excitement other than millions of children are just like this one in that they live in poverty with little hope of leaving-save that fact for a foreign country.

I'm thinking the husband did it, and Lena was either involved or afraid to tell what happened. My biggest question is, the other children have been out to the home for quite a while, hard to believe and 11 and 9 yr old couldn't tell what happened in the house that morning or nite before. I'm sure they have been conditioned to keep their mouths shut, but after almost a year, they are probably not wanting to return to the situation they were living in. I can still see this sad little girls face and it breaks my heart that children have to live like that.

Aliayah I have not forgotten you.
This case makes me the saddest of all the " missing" baby/ toddler/ child cases. Not only was there no vocal, coherent, forceful family member looking for her, but " mom" was a pathetic drug addict who sold the very benefits meant to feed the children she produced and couldn't or wouldn't support.
I also believe Aliayah was dead long before Lena's fake 911 call. The aunt lived nearby and hasn't seen the child since Christmas?! Lena was pregnant with twins who would receive state aid. That means a social worker would be coming around soon to check out the home. I think she needed to account for her " missing" child before her due date
I'm so sorry for how your short life went, Aliayah. I hope all the loving mommas and grandmas in Heaven are giving you all the love you missed on earth.
-ShaynaCat

She's also certain "no blood relative of Aliayah knows what has happened to her," and the step dad was on bath salts...sad to think about.

Sweet Aliayah, I think of you everyday, and I pray for justice to be served. I need closure, as much as, every person that has come to know you, as well as, the details of your sad and short life.

I've never hated someone so much, as I hate Lena Lunsford. I hope this piece of excrement gets the punishment "it" deserves in this life.

I don't entirely understand Bowen's comment regarding Aliayah's siblings:
"Until we find answers for Aliayah," she said, "there's no chance of seeing them."

I get that Lena Lunsford has little chance of regaining physical custody of her other kids (Thanks be to God!) considering the reports of her ongoing criminal behavior, and the chronic neglect and abuse her children have been subjected to while in her care---on TOP of Aliayah going "missing" under suspicious circumstances...

But, what would prevent other (stable/responsible) blood relatives from seeking guardianship, or, supervised visitation with Aliayah's siblings?
Aren't blood relatives of children taken from their parents sought, prior to them being placed with strangers?

The Great Aunt's comment almost makes it seem as though she, herself, is saddled with the burden of solving little Aliayah's disappearance, in order to clear her OWN name.
Is the entire extended family under the umbrella of suspicion, and NOT just Lena and her soon-to-be-ex husband?

It is my understanding that the great aunt was not residing in West Virginia when this tragedy happened; she didn't even know of Aliayah's existence until then.
She's been the only relative, along with Tina Smith (LL's half sister), that have been speaking up for this little girl, as well as, getting volunteers to search.

As to why no immediate family member has custody of the kids, I can only assume they are part of the "small universe" of people that know what happened to little Aliayah.

It's unbelievable that some distant relatives are the only ones concerned about getting justice for this little girl. SMH

Its not my first time to visit this site, i am browsing this website dailly and
obtain nice information from here all the time.
http://nedusunuyorsun.com/groups/added-benefits-impending-another-tuition-tutor/
http://learntelecom.com/groups/english-tutor-big-apple-or-an-experienced-professional-understanding-will-provide-from-high-quality-evaluations/

Well i know where lena is now...she is living in wheeling w.v....working at a local pizza shop...she is pregnant again....got pregnant while she was un a half way house .....thus is a sad story ...u really hope this gets solved!! Poor child !!!