You can hear Crime Wire Investigates Tuesdays at 9 p.m. Eastern.

Together we can make a difference.

Statement analyst, Peter Hyatt, has followed the case of Hailey Dunn from the very beginning, honing in on statements made in interviews by the missing 13 year old’s mother and others. 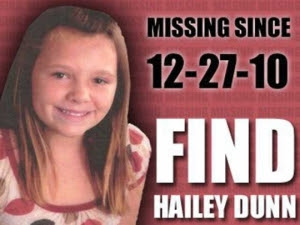 Hailey Dunn went missing on December 27, 2010 while allegedly walking to a friend’s house in broad  daylight in Colorado City, Texas. She was reported missing by her mother, Billie Jean Dunn.
The case quickly turned bizarre with accusations of drugs, child porn, failed polygraphs and Hailey’s mother, Billie Jean Dunn, being named a person of interest in her daughter’s disappearance, along with her live-in boyfriend.
Peter Hyatt has painstakingly combed through interviews by several people connected to the case and has found deception in their words where truth should have prevailed.
In his latest post on the case, Hyatt contends that Billie Jean Dunn may have taken her “story” from a previous missing child case reported in TruTV’s Crime Library. The similarities between the cases of Carlie Bruscia and Hailey Dunn are worth looking into.
Where is Hailey Dunn? Was she abducted, was she sold to human traffickers, was she murdered and disposed of so well that after almost two years her remains have not been found?
Questions still go unanswered, especially the one to which everyone needs an answer, where is Hailey Dunn?
Join the Crime Wire interactive chat room during the live show, or call in with questions for the host.
Peter Hyatt works with law enforcement, private citizens, attorneys, and other organizations, particularly on missing persons cases.  Peter frequently works consulting with law enforcement throughout the country.
“Although Statement Analysis is of great value to an investigator, it is also a great tool for counselors, therapists, human resources, educators, and all those interested in truth.  Equally valuable for private life, the ability to discern truth from deception is something that can be learned, practiced, and excelled at.  In fact, everyone from junior high principals to parents need to learn to discern truth from fiction.” …..Peter Hyatt
Peter Hyatt as Statement Analysis Blog at 5:06 PM

I am looking forward to joining the chatroom and listening to Peter share his knowledge!

Please post links to chat room and phone number for calling into the show.