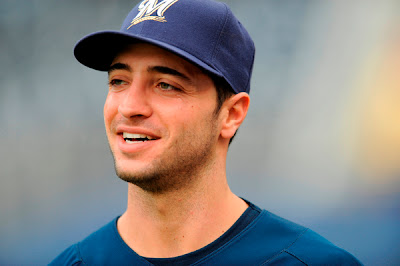 Ryan Braun may win the MVP this year in the majors.  He was originally suspended for using performance enhancing drugs, but won his appeal on a technicality.

Question for Analysis:  Did Ryan Braun use testosterone?

while awaiting the hearing, he said, "This is complete B.S.  I am completely innocent." He told radio announcers that he would "tell my side of the story" at the hearing.   He had this opportunity and may others to say "I didn't take testosterone" or something similar, indicating a reliable denial, but he did not.

Statement Analysis rule:  If the subject cannot bring himself to say he did not do it, we are not permitted to say it for him.

MLB hearing revealed that his attorney argued that the chain of custody was compromised because the sample sat in the fridge over the weekend.  MLB testers testified that it was late on Friday and they did not think Fedex delivered on Saturday, but swore that the sample remained untouched in the fridge.  There was no evidence of tampering.

“If I had done this intentionally or unintentionally, I’d be the first one to step up and say I did it,” Braun said. “I truly believe in my heart and I would bet my life, that this substance never entered my body at any point."
Headlines interpreted his denial as "vehement" and "strong" and "emphatically denies", yet Statement Analysis views it differently:

“If I had done this intentionally or unintentionally, I’d be the first one to step up and say I did it,”

2.  "this"  When there is the word "this" instead of "that", it is indication of closeness.  We expect to hear, "I didn't take testosterone" but the use of the word "this", indicating closeness, goes against innocence.   This is the 2nd red flag for us that is noted.

3.  "I did it" forms the very words of an admission.  This appears to be an embedded admission where a guilty person is able to frame the words of guilt.  An embedded admission is not something an innocent person does unless the person is entering into the language of another, quoting an interviewer or another accuser.  Here, in context, it appears to come from the free editing process.

“I truly believe in my heart and I would bet my life, that this substance never entered my body at any point."

Instead of saying, "I didn't take testosterone, the subject uses additional language to indicate the need to persuade:

1.  "truly" weakens the assertion, as it calls for emphasis
2.  "believe" weakens the assertion more so;  as it acknowledges that others may "believe" differently
3.  "in my heart" weakens it even further, as  it is only where he believes, in his heart, and not in his head.  Others, in their "hearts" will "believe" differently.  It is also an indication that he "beleives" differently in his head, or intellect.  It is a phrase used when someone wishes to persuade, but even in persuasion we don't see additional qualifiers added.
4.  "would" is conditional tense and a further weakening of an assertion.

In the beginning of a denial, we have four qualifiers used.

"I am happily married" is a straight forward sentence.
"I am very happily married" uses one qualifier.  This is due to either attempt to persuade, or that the subject was previously unhappy, and did not expect to be this happy.

"I am very very happily married" will lead a therapist to inquire about his unhappiness.

To qualify 4 times is extreme attempt to persuade.  Ryan Braun qualified his sentence four times to this point, but wasn't done.  He is a poor liar:

that this substance never entered my body at any point."

1  "This" substance, chooses the word "this" bringing him close ("that" shows distancing language) to the testosterone.

2.  "Never" when substituted for the past tense verb, "did not" or "didn't" is unreliable.

Extra words are those in which a sentence works should they be removed.  They give us additional information.

"at any point" is unnecessary extra words making them "doubly important" for the analyst.  It is interesting to note that not only are these extra words weakening a weak denial, but the word "point" is used.  Testosterone use is, in high dosages, administered via needle.

He does not issue a reliable denial consisting of the simple three elements of First Person Singular "I", past tense verb, "did not" and event specific, "I did not use testosterone", in his statements. He was unable to bring himself to say these words; therefore, we cannot say them for him.  He does not deny using testosterone, instead, he gives a deceptive response that, even though it is a short sentence, has an abundance of red flags.

MLB will be forced to consider this should he continue his MVP-like season and come up for voting.

When the appeal was made in his favor on the technicality he said, "The truth prevailed" but did not tell us which truth.  He also avoided saying, "I did not use testosterone"; something an innocent person will say, easily and without qualification.
Peter Hyatt as Statement Analysis Blog at 10:04 AM

Christine Sharp, 46 – who was arrested over the 12-year-old’s death and is still on bail – mourned in defiance of warnings to stay away due to public tension
Adorned with hearts and bearing the words “little princess”, Tia Sharp’s coffin arrives at her funeral watched by her grandmother.

Christine Sharp, 46 – who was arrested over the 12-year-old’s death and is still on bail – mourned in defiance of warnings to stay away due to public tension.

Ms Sharp, whose boyfriend Stuart Hazell, 37, is charged with Tia’s murder, risked her own safety to take her place at the head of the funeral cortege.

She stared ahead in a car also carrying Tia’s mum Natalie, 31, and stepfather David Niles, 29, behind the horse-drawn hearse bearing the youngster’s coffin to a crematorium in Morden, Surrey.

Tia’s father, Steven Carter, 30, travelled with members of his family.

More than 500 relatives, friends and neighbours turned out to say farewell to Tia, whose body was found in her grandmother’s loft in New Addington, South London, in August, more than a week after she went missing.

She was wrapped in a black sheet and a bin bag.

Police had already searched the house four times without finding her.

Despite two postmortems, the cause of her death has still not been established.

Mr Carter said before the service: “It has been a horrible, horrible long time to lay her to rest.

“It is hard knowing there is no cause of death because we still have no answers.”

Her family had asked everyone to wear something in her favourite colour. There were cerise pink dresses, jackets and ties, pink button-holes and hair bands, pink T-shirts with Tia’s picture on the front and babies with pink dummies.

The approach to the crematorium and the gates were decorated with balloons and ribbons and a fluorescent pink stretched Hummer was among the 20-vehicle cortege.

Tia’s white coffin was painted with hearts, flowers and butterflies and decorated with a pink feather boa and the words Little Princess and Little Angel.

On top of the hearse wreaths spelled out Our Girl and Sister. Other floral tributes were shaped like stars, a horse’s head and a Blackberry with Tia’s picture on the screen.

A family member told the congregation: “Tia was a happy helpful girl – and a real girly girl too. She loved nothing better than dressing up and prancing around in her pink clothes and doing her hair and make-up.”

The relative went on: “Tia was taken from us far too soon in the worst possible way.” They added: “Don’t let anger eat away at you or your love for Tia.”

Another mourner said grandmother Ms Sharp, whom Tia doted on, sat with her family and “everyone respected the fact that this was an occasion to remember Tia and celebrate her life”.

Music included All Things Bright and Beautiful and Stay with Me by Ironik.

Hazell is due to appear at the Old Bailey on November 19. Ms Sharp’s next-door neighbour, Paul Meehan, 39, has been bailed after being questioned on suspicion of assisting an offender.

If some one needs expert view on the topic of blogging then i propose him/her to visit this blog, Keep
up the pleasant job.
Also visit my web page : example