Susan Smith has provided us with the example of past tense verbs and missing children.   Casey Anthony remains America's most hated mother.


Toddler-killing mother Susan Smith 'tries to kill herself in prison, has a lesbian lover... and has a wealthy male suitor waiting for her on the outside'

America's original most-hated mom Susan Smith was found in a pool of blood in her prison cell after she slashed her wrists during one of her bizarre cutting rituals, according to reports.
The 40-year-old monster mom came to national attention in 1994 when she strapped her sons - Michael, three, and Alex, one - into their car seats before rolling the vehicle into a lake so she could be with her wealthy lover.
She is serving a life sentence in Leath Correctional institute in North Carolina after she eventually confessed to the murder of her children. 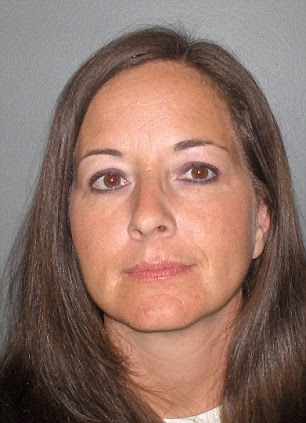 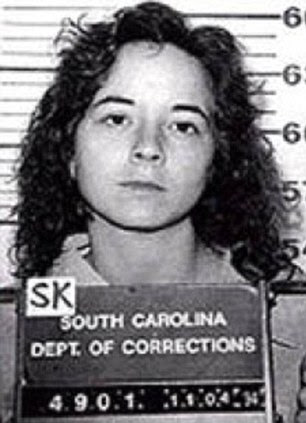 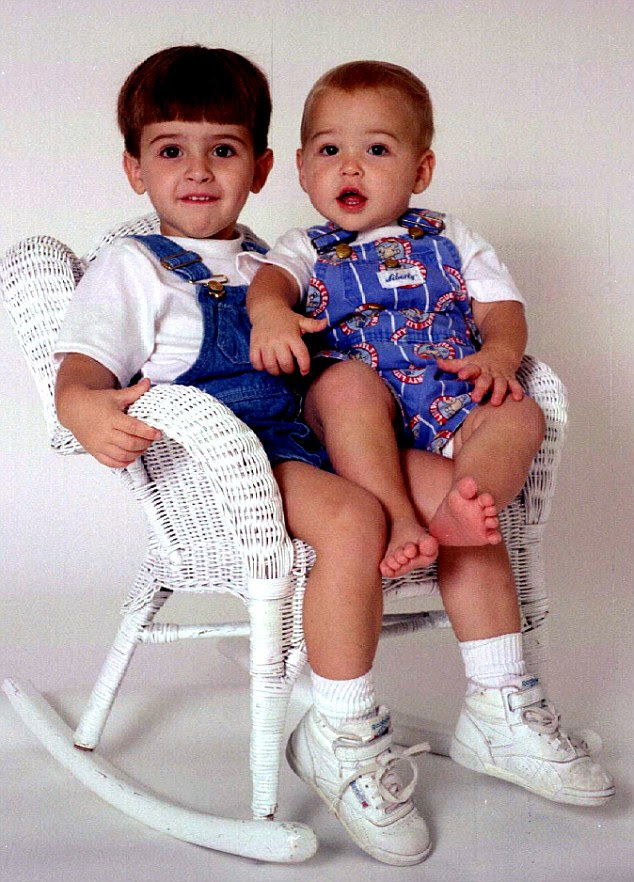 Tragic death: Michael Daniel Smith, three, and his 14-month-old brother Alexander Tyler Smith, are shown in a family photo before they were killed by their mother
Former fellow prisoner Stephanie Hulsey spoke to the National Enquirer about Smith's suicidal behavior and revealed she has a butch lesbian lover.
She said: 'Susan says she cuts herself because it releases all her pain. She has terrible raised scars on her wrists, maybe 15 of them, some three-inches long.'
Smith first told police she had been car-jacked by a black man who had driven off in her car with her children inside.
A nine-day nation-wide appeal followed. Susan and her estranged husband David appeared in front of TV cameras pleading for the safe return of their children.
Police were already suspicious of her story, especially after results of a polygraph test were inconclusive and her statements changed each time she was interviewed. 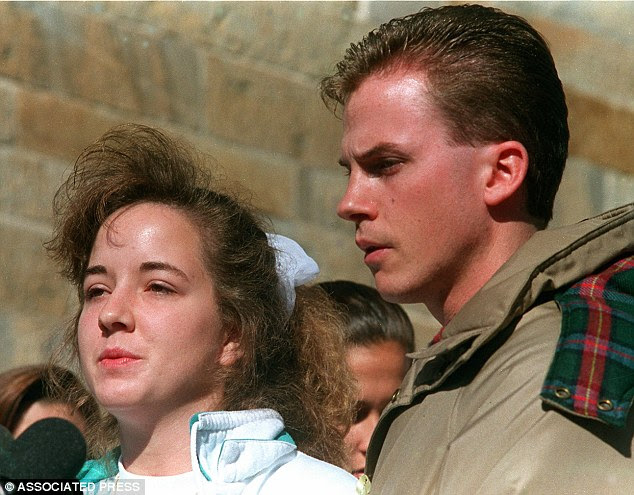 Appeal: Susan and David Smith address reporters on November 2, 1994, during a news conference in Union, where they pleaded for the safe return of their sons, 14-month-old Alex, and Michael, three 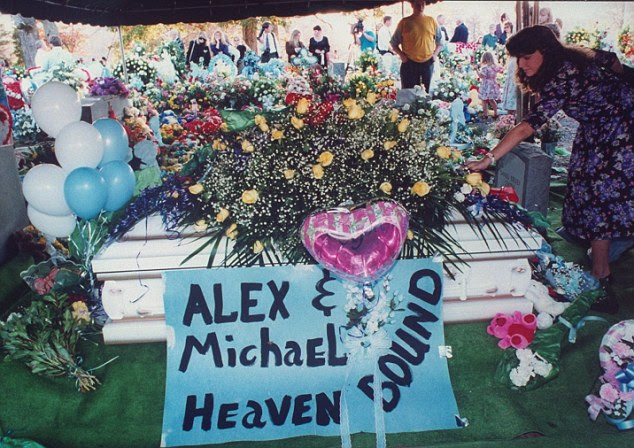 Funeral: Mourners surround a flower & balloon-lined single casket which the brothers were laid to rest next to each other 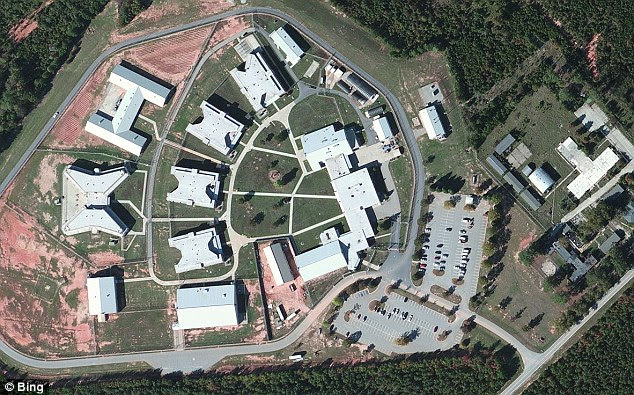 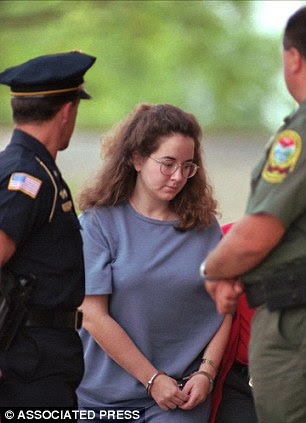 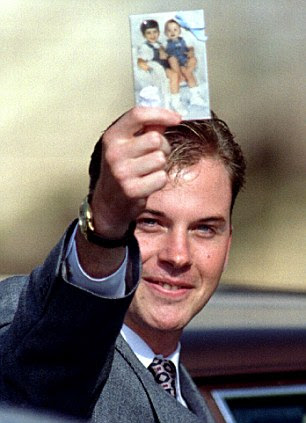 Justice: David Smith holds up a picture of his murdered sons Michael and Alex after his ex-wife Susan Smith, left, was sentenced to life imprisonment, right
She eventually confessed, saying she killed them because they stood in the way of her being with local businessman Tom Findlay who had just broken up with her.
The Dear John letter was also found in the car.
Miss Hulsey, 32, explained to the Enquirer about the moment she found Smith in a pool of blood in her cell.

'There was blood spurting everywhere and though she was weeping, she wasn't crying out in pain. She used to say, "You don't feel pain when you cut. Cutting takes all the pain away"'

She said: 'She had been caught with some prescription pills and was locked in a room waiting to be sent to solitary.
'A friend and I knew she was a cutter and we were worried she might harms herself so we decided to check on her.
'The room was locked but we could see her inside - sitting on the floor and slashing deeply at her wrists with a razor she snuck in with her.
'There was blood spurting everywhere and though she was weeping, she wasn't crying out in pain. She used to say, "You don't feel pain when you cut. Cutting takes all the pain away".'
Susan was then rushed to hospital before being placed in solitary confinement for 60 days.
Miss Hulsy also revealed that, not only does Susan have a lesbian lover on the inside - who is 'a big woman like a man serving life for armed bank robbery' - she also has a male suitor on the outside who she plans to marry if she gets paroled.
'I've seen him visiting her. Over the years he's sent her thousands of dollars and paid for her hospital bills.'
The wealthy suitor - though not been named - is not Tom Findlay, the man she killed her kids over.
She will be eligible for parole in 2024 after serving 30 years inside
Peter Hyatt as Statement Analysis Blog at 7:34 AM

Clearly she had other options. Pure craziness!

Many women who are heterosexual outside of prison, will hook up with other women when incarcerated for long periods of time. For women, the need for companionship and closeness with another human being is very strong and if there are no men available, another woman fills the void. Once released from the prison environment, unless the woman is lesbian, a man will once again be the dominant choice. That's just the way it is...It's not as unusual as it seems for those incarcerated for long periods of time. Call it "human nature".

Nice to know that even in prison, she has access to full make-up and hair straightener. I guess you want to look good for Bubbette.

I am from Union county SC, and this, with time, has died down, some. But if she ever got paroled, it would be on again. I honestly believe someone would kill her. I didn't know her personally, as I am a few yrs older than her. I still see David, he had moved to FL, but is now back in SC, working at a grocery store. He still has the saddest eyes I have ever seen. I don't think he will ever fully recover from losing his sons, at their mothers hand.

Wow, a full makeover in prison? Doesn't appear to be such a hard life there. Susan Smith is living, which is more than she allowed her sons to do.

Well, I am not sorry she is suicidal. It would be horrible to discover that she is just fine during her prison stay. She didn't show sympathy for her kids, therefore, I have none for her.

I am disappointed she was found. It would have saved the taxpayer a fortne. She should have been executed a long time ago.
maybe then the families can begin the healing process

It's been speculated, and i believe, that Susan Smith has BPD, although I've never read of an official diagnosis having been made. Knowing that she's a "cutter" makes me believe it even more so.

Personally, i don't believe this was an actual suicide attempt.

Jenna, I thought of borderline, too. The cutting she described, taking away pain rather than causing pain, is not a suicide attempt. It may be an attempt to look suicidal and get attention or just to block out pain.

Notably, the source for the article is "former fellow prisoner Stephanie Hulsey." A convicted felon selling a wild story shouldn't be given much credibility IMO. Hulsey's statement that the wealthy male suitor on the outside "paid for her hospital bills" cannot be true because prison inmates' hospital bills are paid for by the prison, not by the prisoners or friends/family of the prisoners. I suspect the rest of her story is equally untrue, completely made-up or wildly exaggerated so as to have something marketable to the notorious gossip rag The Enquirer. You can pretty much say whatever you want - true or false - about convicted, imprisoned multiple-murderers; they have a difficult time proving their reputation was harmed as a result of the defamation since people already have the lowest possible opinion of them.

I agree with Kat. I would hope, Peter, as a Christian, that you would be praying for mercy and redemption for her and not wishing ill will on her as others are. Jesus Christ is not wanting anyone to perish without coming to Him. He was grieved over Osama bin Laden. I believe in justice. I do not agree with the hate that is spewed in the name of perceived justice. Hate someone and you have committed murder.

Lis and Jenna in Tuscon - I too agree with both of you that Susan Smith acts like someone who has a diagnosis of Borderline Personality Disorder. The cutting is just one part of that. There's a whole slough of irrational thinking, lack of emotional regulation, and self-destructive behaviors that are part of that disorder, and there's usually a past history of sexual abuse, as well. It all fits what we know about Susan Smith. She's another example of how sexual abuse can sometimes result in personality and character defects later in life, and the victim (or the abused) ends up evolving into a narcissistic or sociopathic person from whom others need to be protected. It's odd, but I read about the Susan Smith case in depth once, and I never read that she was actually diagnosed with BPD, even though it seemed so obvious. She had some other B___S___ diagnosis. I think she slashed at her wrists this last time, because she thought she'd get a break from solitary confinement. I don't think she really intended to kill herself. It's a cry for attention, like you guys suggested. So, I'm glad to hear they patched her up and sent her to solitary confinement for 60 days.

Trying to commit suicide is another way to get pitty. Kill her ﻿the way she did her kids already I will do it

I too was in lock up with sue. She was in a bit of trouble for "playing a joke" on an officer. I had seen her at pill line but we really talked down in lockup. Sue is an insecure and unsure person. Her cutting scars are bad. I did 32 mos. For forgery but met and was forced to live their way. Never again. She seeked approval always. Mmmm

I too spent 5 days in lockup with sue. Her scars are bad. This was October 2012. She went on how her ex-husband abused and neglected her. I asked her why???? She told me the story. Why she cuts and about playing gay. Faking it. She has personality issues. I saw a woman that had not a care in the world.

If the Susan Smith story is followed , for years she was abused and molested as people who could help ignored her. she is a victim just like her children; a victim to longtime mental illness, gone unchecked.

i did time with susan too. we were on the same quad.people really just dont have a clue about her.