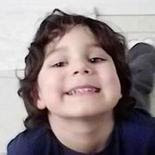 Anthony M. Bennett, the Mount Pleasant man charged with abusing 4-year-old Carnel Chamberlain a month before his remains were discovered, has state and federal trials before him, but the question is which will happen first.
In federal court, the 20-year-old Bennett is to go to trial on Nov. 27 on a charge of assault resulting in substantial bodily injury to a child younger than 16, a five-year felony. On the state level, Bennett is scheduled to face a trial in Bay County Circuit Court on the same day on two counts each of assaulting a prison employee and assaulting, resisting or obstructing police and one count of malicious destruction of property between $200 and $1,000.
“I would imagine the federal case would proceed first,” said Bay County Prosecutor Kurt C. Asbury.
Federal prosecutors allege Bennett in May and June choked, punched and dragged Carnel, the son of Bennett’s 21-year-old girlfriend, Jaimee Chamberlain. Bennett was living with the mother and son at the time.
Authorities have also said Bennett was baby-sitting Carnel when the boy disappeared on June 22. After a week of searching, authorities on June 28 discovered charred remains of a child beneath the porch of the Bennett-Chamberlain home in Mount Pleasant.
The FBI is handling the investigation into Carnel’s disappearance and has not confirmed the recovered remains are the boy’s. The Chamberlain family has said the body was Carnel’s, however.

Carnel Chamberlain
Authorities arrested Bennett the day they made their grisly discovery. Bennett has not been charged in connection with the child’s death.
While housed at the Bay County Jail, Bennett on the morning of Aug. 24 was reportedly arguing with another inmate. When a corrections officer attempted to quell the dispute, Bennett swung around and punched him three times, court records show.
The other inmate came to the officer’s aid in pulling Bennett away. When the officer regained his footing, he locked Bennett in a cell, but the unruly inmate then proceeded to kick a glass window, court records show.
An extraction team was called in to remove Bennett from the cell and place him in a different part of the jail. When they opened the cell door, Bennett had fresh superficial cuts on his arms, though no weapon was recovered, court records show.
U.S. District Judge Thomas L. Ludington is to preside over Bennett’s federal trial, while Circuit Judge Joseph K. Sheeran is to preside over his local trial.

Peter Hyatt as Statement Analysis Blog at 7:29 AM

Bennett has not been charged in connection with the child’s death. - I don't understand what more evidence do they need to charge him with the murder! How disheartening!

@ Anonymous - Generally, the speedy trial laws require trial to happen within a certain amount of time after formal charges are filed, particularly when the defendant is in custody. So, in a state case where the statute of limitations isn't ever going to run out and the federal case is going to happen first, it makes some sense that they aren't in any hurry to file the murder charges. Also, if the state trial doesn't happen until after the federal trial is over and the federal prison time has been served, then the state sentence will run consecutively instead of concurrently with the federal sentence.

On the other hand, as time goes by, people's memories blur and evidence can be lost in floods, fires, etc. This is generally viewed as hurting the prosecution more than the defense because the prosecution bears the burden of proof. Thus the state will be motivated not to excessively delay filing the murder charges and getting its case to trial.

Detroit filed charges against DeAndre Lane, without a body, and got a conviction. More DA's should follow suit. Not all juries are as stupid as the C Anthouy jury.

And what of the mother of the murdered child?
Who aided and abetted killer bennett?
Where is she?

What about first degree murder? If he only gets five years in jail, I have lost all faith in the system. This man needs to be put away for life because he will kill again.