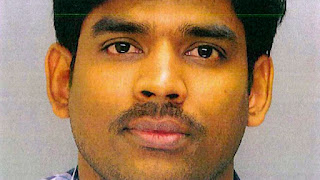 A family friend hoped to hold a baby girl hostage to get $50,000 from her software-engineer parents but instead killed her and her grandmother in a botched kidnapping, according to police in a Philadelphia suburb.
Raghunandan "Raghu" Yandamuri, 26, knew the infant's parents both had good jobs, and he crafted a ransom note threatening to kill their daughter if they did not leave the money at a local supermarket, police said in an affidavit filed Friday.
"It's up to you to decide, do you want your 1-year-old or five months of your income?" the lengthy, typed note said.
The plot unraveled when he dropped the baby as he juggled her and a kitchen knife and struggled with her paternal grandmother, who was watching 10-month-old Saanvi Venna on Monday during a six-month visit from India, the affidavit said.
The grandmother, 61-year-old Satyavathi Venna, was fatally stabbed and suffered defensive wounds. The suspect told police he put a handkerchief in the baby's mouth to quiet her, then wrapped a towel around her head and put her in a suitcase when he left the sixth-floor apartment, according to the affidavit.
The ransom note called the parents by their family nicknames, leading police to focus on friends and acquaintances, Montgomery County District Attorney Risa Ferman said. The parents were never again contacted for money as the search for the missing infant stretched through the week.
"We had been hopeful that Saanvi was still alive," Ferman said Friday. "Tragically, that is not the case."
Authorities instead found the infant in a bloody white dress beneath a bench near the sauna of the fitness center at the sprawling apartment complex where Yandamuri and the victims lived.
Yandamuri had been interviewed Thursday as police canvassed the family's friends. He told police that he had printed nearly 200 missing-child posters at work, distributed them and attended a vigil for the baby. But he later detailed the botched crime to police and said he had stolen jewelry, some of which he threw in the nearby Schuylkill River, the affidavit said.
A throng of people jeered at him, shouting "Hang him!" and other taunts, as he was led into court Friday afternoon in a bulletproof vest.
Yandamuri was being held without bail on two counts of murder, kidnapping, robbery and other charges pending a preliminary hearing set next week. He does not have a lawyer and did not enter a plea at a brief arraignment Friday. He told a judge he is not a U.S. citizen and was given time to make a private call to the Indian consulate.
The baby's father, Venkata Konda Siva Venna, and mother, Chenchu Latha Punuru, moved to the United States from India in February 2007 and moved into the apartment in June. Satyavathi Venna arrived from India in July and was scheduled to return home in January.
She opened the door to Yandamuri on Monday morning to see he was armed with a kitchen knife, authorities said. She retreated to the kitchen, while he picked up the baby from the couch, the affidavit said.

Peter Hyatt as Statement Analysis Blog at 4:53 AM

Villainous neighbour, absolutely heroic grandmother. My heart is overwhelmed with honouring her courage and determination. She gave everything in her heart and spirit trying to save that precious baby. If there is a high seat for emblems of what humanity can be, she sits there. So tragic.

I hope this mad killer gets the dp, or LWOP. nfortunately, you never know wht the prosecutors and judges will (and will not) do these days.

equinox,
You said it! I would also like to commend the great detective work in looking at the ransom note.

Local Philadelphia paper reports that this man filed for bankruptcy in March, and reported gambling debts of $50,000 (same amount as ransom demand). Also says that his wife turned him in, in hopes that she would get the $30,000 reward.