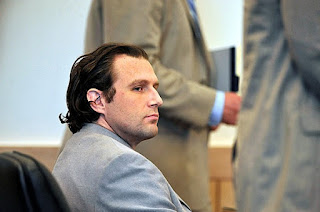 Statement Analysis is in bold type, added to the article.
A reliable denial is simple:
1.  The First Person Singular Pronoun, "I"
2.  The past tense verb:  "did not" or "didn't"
3.  Specific to the Allegation:  "I did not kill Holly Boutiler"

This does not need to wait for truth to come out:  the truly innocent (not just judicially innocent) will say so, easily, early and often, and without sensitivity indicators or additional language.
Liars will say they "would" never, but will avoid the above formula for a reliable denial.
This man was convicted and sentenced to life in prison.  Underlining, color and italics have been added for emphasis, with analysis in bold type.  We often look for articles which claim "denials" are made only to find that there was no denial of the action, or, in the least, there was no reliable denial.

To know more about this brutal crime, see:   HERE

Of note and concern is when a profiler says that a violent murder is simply not committed by someone without a history of violence.  In this case, the subject was fined for threatening, but had no history of violence, and only had traffic issues.

He slit a girl's throat to prove he was not involved with her.  He had known her for a single day.  We do not need to see an increase in violence to reach this point.  This argument was made (and is now outdated) about the Ramseys.  We continue to see cases in which an extremely violent act is carried out by someone without a history of violence.  History, by itself, is not a defense.

Peter Hyatt as Statement Analysis Blog at 5:34 AM

Of note and concern is when a profiler says that a violent murder is simply not committed by someone without a history of violence.


I think everyone has a mental trigger point, that is, there's something everyone feels so strongly about that if you argue against this point, the person stops thinking and starts getting angry

Peter,isnt there always a trigger point,something that eventually makes someone snap irrespective of their past history.

I think you have an excellent point there John. Sometimes one can be pushed so far that there is not much they can do to avoid this awful reactive lack of behavior management control unless they are able to use logic and quickly remove themselves from the situation. Thank heavens most of us are able to avoid going all the way to this trigger point.

On the other hand, there are many of these thrill killers who are so psychotic and who weren't pushed to their breaking point and beyond; but who are so deviant and of a reprobate mind that they plan and perform the kill without any provocation. Unfortunately, some of these can snap at any time without any prior warnings.

Sad, we just never know who we're dealing with. REB

I think he has done stuff in the past, just hasn't been caught for it. Just think of all the dirty oldmen caught on live tv when they do a predator round-up with Hansen. According to them, that was the "first" time they did such a thing. If someone digs deep, they will probably find that he didn't treat people well, he probably mistreated women, he was not someone people felt close to. He is a sociopath that got away with it until now.

The thing about this "lack of history" is that it just means he was not caught.. Does not necessarily mean he has not committed other crimes or even murders.


People forget how many unsolved murders happen ever day.

It's very possible this man has killed before and just got away with it.

My brother recommended I would possibly like this website.
He used to be totally right. This publish truly made
my day. You can not imagine just how so much time I had spent
for this information! Thanks!