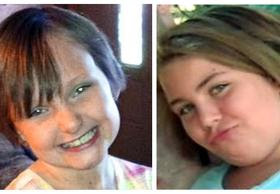 Hunters appear to have stumbled upon the remains of the two missing cousins, Lyric and Elizabeth.

Updating...Note the quote from July claiming the family had not cooperated.

from CNN:
"Right now, it's looking like the outcome was not the one that we wanted," Abben said at a news conference in Evansdale, Iowa.
The girls were last seen by their grandmother on July 13 when they left for a bike ride. The girls' bicycles and a purse were found near Meyers Lake hours after they were reported missing.
A search of the 25-acre lake in July turned up nothing, and authorities said they believed the cousins were abducted.
"Cooperation with law enforcement is the key factor in discovering the whereabouts of Lyric and Elizabeth," FBI spokeswoman Sandy Breault said in July. "Unfortunately, in this case, law enforcement has not received total cooperation from all family and close friends," she said.
Abben said the investigation is ongoing, and he thanked the public and the media for their assistance and support
Peter Hyatt as Statement Analysis Blog at 8:32 PM

I'm interested in the Louise Woodward case (the english nanny convicted for caysing the death of the baby she nannied for, only later to be released

I am glad the bodies were found. I hope LE will be able to arrest the one or ones who committed this crime.

Billie Jo and Shawn should be afraid. It is hunting season in Texas, also.

I was just thinking of thease girls the other night .Along with Baby Lisa .Kyron..So many of thease missing children cases go cold without a body.Now remains have been located lets hope for some arrests an answers .

Oh this is so so awful.

That is so sad. I am glad they were finally found so they can have a proper burial, but, it is so sad that this is what happened.

Hi Nanna Francis..I am thinking of you, in this season, and always..
(((hugs)))
Jean

Thank you. I hope everything is going well with your son. I think of you often, also. I am looking forward to Peter's new show and the CHAT ROOM on it.

It is horrible to think of all these *missing* children out exposed to the harsh elements, raging rivers, wild animals that would not be if for a coffin. My only peace is knowing they are now safe, never to be hurt again.

Remember the published letter to who has the girls from the parents?
And now this... Wonder if bodies were more exposed (unearthed)so they could be found, being there is a lockdown on the site and its location.. Will find out soon enough.. Just makes you wonder if any connection..

Beneath the winter sky
under the leaves
footprints and sighs.

The wind whispers above
to no one
in particular.

Blue against cedar.
Heavy with truth bending
to reveal
bones of bicycles
sunshine
and tears.

Rest in peace little ones... So heartbreaking.

I agree with Nanna F. Good to 'see' you Nanna.

I agree, although its not the outcome we prayed for.....it must bring some kind of closure for the family! And I pray now we find the S.O.B's

Read on huff post that an anonymous person increased the reward from 50k to 150k just last week.

Even if this isn't the two cousins, it's a very sad discovery for some family, certainly. I suppose it likely is the girls we've been praying for, though, and I know their families are heartbroken.

I'd like to point out one thing: We're frequently reminded here that indications of deception in a person's statements don't always mean that the person is guilty of the crime in question. Often, the person is involved in some other activity that they perceive may have caused whatever happened, or they question whether they could have prevented said crime. As always, I could be mistaken, but I believe that something like this has taken place with Lyric & Elizabeth's families. It makes perfect sense to me why their cooperation with LE was sketchy for a while. These people have a history (recent, even) of criminal activity related to drugs. If it is accurate that cooperation was strained with this family, it's certainly clear why. I imagine they were very concerned (with good reason) for LE to become so deeply involved in their lives. Of course, they allowed it because they wanted their children found more than they wanted to stay out of trouble, but it's pretty understandable that cops would try to pin a crime on them because of their background. It's reasonable that knowledge of their history would play into the interrogation, polygraphs, interviews, and generally saturate the case. Their activities would be scrutinized and used against them, which is harrowing for even the squeakiest-clean individuals. They (if not guilty) likely became intensely frustrated with having to defend themselves constantly rather than focusing on finding their children. There are probably a number of people who were not aware of their drug activity (the girls' schoolteachers, certain extended family members, friends across the country, childhood friends, parents of the girls' friends, coworkers, etc.), and Lyric & Elizabeth's parents were very possibly trying not to appear to be horrible parents in front of all these people. Not to mention, people always tend to assume that parents who are involved in illicit activities couldn't care less about their children, and (thanks, in large part, to Trista Reynolds) we know that is not always the case. But, imagine trying to convince people that you DO love your kids, when they have already decided that you don't care about them at all, and you know you caused that because of the things you've been involved in. You might do and say things that SA would detect as deceptive, because you're trying to persuade - not to keep people from finding out that you committed the crime in question, but to try to prove, however possible, that you do in fact love your kids.

The investigation, I'm sure, is far from over, but my heart goes out to Lyric & Elizabeth's parents tonight as they bear the burden of a new and horrible reality. If any good can come from it, maybe they'll find their peace in the Lord, and turn their lives around to honor their girls' memory. They have my sympathy and my prayers.

The 67-year-old was detained at a hotel in Guatemala City with the help of Interpol agents.

He entered the country over the weekend with his 20-year-old girlfriend Sam Venegas after going on the run following the murder of his neighbour in Belize last month.

Police spokesman Pablo Castillo said the software pioneer could be deported within hours to Belize or repatriated to the US.


John McAfee with his 20-year-old Belizean girlfriend Sam Venegas
"We understand that he has permanent residency in Belize, where he could be deported in the next few hours," the spokesman said.

"His status is illegal and he is being made available to immigration authorities so they can decide whether to deport him to his country of origin."

After his arrival in Guatemala, Mr McAfee employed former Guatemalan attorney general Telesforo Guerra to manage his plea to stay in the country.

"They accuse him of a common crime. So what I have to obtain is an authorisation of asylum."


John McAfee during an interview
Mr McAfee has maintained his innocence since escaping the Belize police on the island of Ambergris Caye hours after his neighbour Gregory Faull was shot in the head on November 11.

The authorities in Belize say Mr McAfee is wanted for questioning as a "person of interest" and have urged him to give himself up.

Mr Faull, who was found with a 9mm bullet in his head, led neighbours in writing a letter to the mayor complaining that the millionaire's "vicious" dogs and aggressive security guards were scaring tourists and residents.

Before he fled after the murder, Mr McAfee shot dead his four dogs, which he said may have been poisoned by Mr Faull.

Ballistics experts have exhumed the animals and are examining them to see if the bullets match that found in the victim.

While the medical examiner's office has not publicly identified the bodies, Elizabeth's mother Heather Collins posted a message on Facebook late Wednesday night:
"We have been so blessed by the out poor of all the pryers and support tonight with the gut wrenching news that my beautiful daughter and niece's bodies were found by hunters today.This was the outcome we wanted but we know that they are up in heaven with our savior and out nightmare of where they are and what is happening to them has been answered."

CNN has an article stating the key to the investigation is full cooperation if the cousins' family and friends, which they do NOT have. I wish I could link with my phone!

My hope is that the accidental finding these bodies may trigger other guilty parties (for Example in Maine or Kansas) to wonder if their secrets will be discovered and attempt to hide the bodies again or move the bodies and this will aid in catching them.

SconnyGirl ~ I often wonder that myself!
Also, I wonder if, say Billie Dunn, ever goes to the burial site of Hailey's body to "visit" her? Are the murdering parents - like Deborah Bradley, Justin DiPietro - still monitored daily by police? I guess if their babies bodies were thrown in a dumpster - or a river, there is no one spot to visit - but it would be a curious thing, and a good question.

"The location of where the bodies were found has not been released. However, on Wednesday night, police and state investigators converged on Seven Bridges Park in Bremer County, 20-miles from Meyers Lake in Evansdale.
The lake is where Elizabeth Collins and Lyric Cook’s abandoned bicycles were found on July 13th."
http://www.msnbc.msn.com/id/50093607

Lake to Park is practically a straight shot north....hope LE is doing massive search in area in case it's a dump site. Are the 2 mothers sisters (since cousins with different names) therefore the shared grandmother, and grandma was last to see them?
Suspicious that Lyric's father broke off a plea deal day before abduction (if i recall her mom didn't seem overly concerned & mixed up tenses in statements)sooo a drug deal/kidnapping gone wrong ?

Meag, I read about a missing child case where the parents were cought after 1-2 years when they visited their child's "grave" on her birthday. I don't think LE follows the suspicious families around every day, but they do have some clues and ideas about when to check their activities.

THANKS ANON AT 1258 ~ We could only be so "lucky" if these murdering 'parental units' tripped themselves up...

Kristi Abrahams is the mother of missing daughter Kiesha in Australia. She and her husband visited Kiesha's makeshift grave in April 2011. They were caught doing so and charged with murder or manslaughter.

One of the mom's confirmed on Facebook that it is their 2 girls.

Poor little girls. They must have been so frightened. Senseless!!!

Below is an excerpt from the news item.

The mother of one of two Iowa girls missing since July has confirmed via a Facebook post that the bodies found by hunters in a wooded area Wednesday are those of her daughter and niece, wcfcourier.com reports.

“We have been so blessed by . . . all the prayers and support tonight with the gut wrenching news that my beautiful daughter and niece’s bodies were found by hunters today,” Heather Collins said of her daughter, Elizabeth Collins, 9, and her niece, Lyric Cook-Morrissey, 11, in a late Wednesday Facebook post.

Got the call. Duly noted;disregarded.

Don't bother guarding the bridges. I'd jump it if it were out anyway.