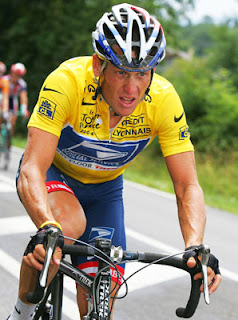 The media has picked up on what readers here knew within hours of the airing:  Lance Armstrong lied to Oprah Winfrey.

Armstrong is now under federal investigation and may be facing years in prison for conspiracy among other crimes.

Federal investigators are in the midst of an active criminal investigation of disgraced former Tour de France champion Lance Armstrong, ABC News has learned.
The revelation comes in stark contrast to statements made by the U.S. Attorney for Southern California, Andre Birotte, who addressed his own criminal inquiry of Armstrong for the first time publicly on Tuesday. Birotte's office spent nearly two years investigating Armstrong for crimes reportedly including drug distribution, fraud and conspiracy -- only to suddenly drop the case on the Friday before the Super Bowl last year.
Sources at the time said that agents had recommended an indictment and could not understand why the case was suddenly dropped.
Today, a high level source told ABC News, "Birotte does not speak for the federal government as a whole."
According to the source, who agreed to speak on the condition that his name and position were not used because of the sensitivity of the matter, "Agents are actively investigating Armstrong for obstruction, witness tampering and intimidation."

Peter Hyatt as Statement Analysis Blog at 11:03 AM

Word on the street is Lance is considering changing his name to Cindy and skating on all charges.

I think he looks and sounds so much like our leader of the continual campaign.

So neither of our tax payer funded frequent flyers, the current president, and the state dept head, were "there" during the entire lengthy Benghazi debacle?

And that frees both of those government employees from any responsibility?

And neither of these highly visible, and very highly paid individuals had bothered to establish a contingency plan should life and death depend on it?

When did we accept that our governmental leaders will not protect our Americans employed abroad?

It would seem that there are degrees of deception, so where is the prosecutable/punishable demarcation?