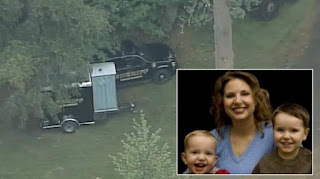 Investigators with cadaver dogs have been searching a Marion County property for the remains of Susan Powell, who was last seen in Utah in December 2009.

Police traveled from Utah to the heavily wooded property on South Butte Creek Road Tuesday.During a search of a storage unit in Puyallup, WA, investigators discovered evidence that pointed them to a property in Scotts Mills.
FOX 13 in Utah reports Susan Powell's father, Chuck Cox, also made the trip to observe the dig effort. A spokesman for the West Valley Police Department out of Utah told FOX 12 on Wednesday night that Susan Powell's remains have not been found on the property.
Powell's husband, Josh Powell, had been considered a person of interest in her disappearance. He killed himself, along with the couple's two children, in a gas-fueled inferno at a home in Pierce County, WA, in February 2012.
The Oregon property is connected to Josh Powell's aunt and uncle on his father's side. According to the property's owner, Powell's relatives have not lived on the property for more than a year. The current renter told FOX 12 that he has no ties to the Powell or Cox families.
One neighbor told FOX 12 he saw several law enforcement agencies at the property on Tuesday.
"There was probably 8 or 10 automobiles that came in and left, and they were all newer automobiles," said neighbor Robert Perkey. "And the people that were in them, I waved at them, and they were very subdued."
Josh Powell claimed he had taken his two sons camping late the night his wife disappeared.
He later lost custody of the children, who were living with Susan Powell's parents. He was in a custody battle with her parents at the time of the children's murders.
A judge ruled the two boys would remain in the custody of her parents, but Josh Powell would get visitation rights. The judge also ruled Josh Powell would have to undergo a psycho-sexual evaluation.
The boys were killed after a child protective services worker brought them to the home for a supervised visit. The worker was blocked from entering, and the home then burst into flames.
Although smoke inhalation was the primary cause of death for Josh Powell and his two sons, the boys also suffered "chop injuries" to their heads or necks, according to the Pierce County Medical Examiner's Office.
Josh Powell's father, Steven Powell, was convicted of voyeurism in May 2012 for recording images of two girls in a bathroom at a neighboring home in Puyallup. He was sentenced to more than two years in prison.
However, with credit for time served and good behavior, a department of corrections spokesman said Steven Powell is now scheduled to be released from prison within the next several weeks.
The owner of the Oregon property told FOX 12 that there is still some law enforcement equipment on site. He hopes to have it removed tomorrow.
A spokesman for West Valley police told FOX 12 investigators plan to return to the property on Thursday.
Peter Hyatt as Statement Analysis Blog at 5:36 AM

"Steven Powell is now scheduled to be released from prison within the next several weeks."
---------------
He won't have the protection of prison bars when he is released into society.

I read that this had something to do with the other son who killed himself recently, and a junk car he was reported to have ditched at that property.

More and more I think Steve Powell is guilty and that the whole family is involved in the cover up.

Steven Powell has proven himself to be a deadly force in the lives of his family.

His reckless indifference, his addictions, and personal preferences have proven to have lethal consequences on his children and grandchildren.

Five young members are dead all ready, and Steven Powell will go back to his old habits and haunts when he gets out of jail and think nothing about his victims.

He will mourn his own lot in life and feel the need to "set the record straight" about himself and his misfortune.

Chuck Cox, also made the trip to observe the dig effort

This is how concerned parents act when confronted with the fact that their loved one may have been found. BJD needs a new "script". Hers is all wrong.

I hope they can find Susan's remains so her parents can have some closure. Her parents have been thru so much losing their daughter and their grandchildren.

My god what a sad story!
I used to read real estate agent reviews while I have nothing to do at work,but today I decided to browse the internet; tomorrow I will return to my real estate magazines they aren´t as sad as this.