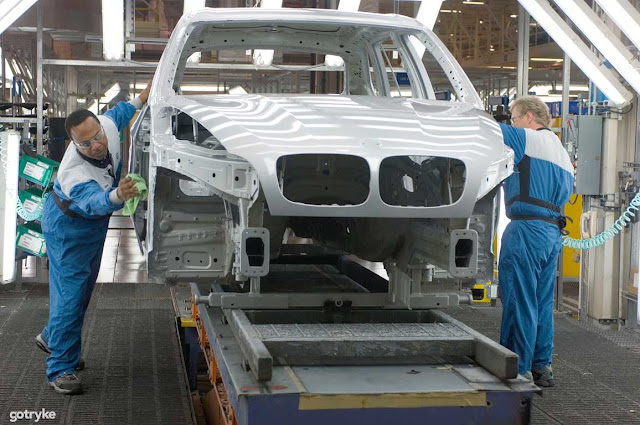 BMW is successfully employing citizens and runs the criminal background check in order to avoid hiring those convicted of crimes.

President Obama's administration is suing them for this practice claiming that it discriminates against black people.

The suit does not allege that it discriminates against white people with criminal convictions, however.

What will be the repercussions?

Companies do not like to hire those who have criminal records due to controlling shrinkage, but will this be another attempt to "redistribute wealth" by forcing a business to close down or move out of the country?  Note at the end of the article is seeks to bar "future discrimination."


A federal agency filed a lawsuit against BMW Manufacturing, alleging the company discriminated against African-Americans in the hiring and firing process because of criminal background checks.
According to the U.S. Equal Employment Opportunity Commission (EEOC), BMW began working with a new logistics company in 2008 and when current employees re-applied to continue working for the new logistics provider, BMW discovered that 88 employees had conviction records, which violated the company’s policy.
BMW’s conviction policy at the time excluded from employment anyone with convictions of certain categories of crimes, regardless of the age of the conviction or making a distinction between felony and misdemeanor convictions, the EEOC said.
The 88 logistics employees were eventually fired and denied a job, 70 of whom were black and disproportionately disqualified from a job, the EEOC said.
The EEOC said BMW violated Title VII of the Civil Rights Act with this hiring practice and is seeking lost wages and benefits, as well as reinstatement or front pay for the 69 claimants. The agency said it’s also seeking an order barring future discrimination and other injunctive relief.
Peter Hyatt as Statement Analysis Blog at 4:45 PM

That's insane.
If this case is won and verdict upheld, what will that mean?
Employers can no longer run criminal background checks on ANYone?

Blacks and other minorities will be exempt from criminal background checks, but whites will still have to pass them in the hiring process???
:/

It's fair for ALL prospective hirees or fair for NONE.

It's crazy ... it has nothing to do with the color of their skin ... it has to do with criminal convictions ... that's all.
The policy is probably perfectly clear about not hiring convicts - but they're being accused of not hiring people because of their ethnicity? They could only prove that if the company hired a higher percentage of white men with criminal records but didn't hire the black ones with criminal records. Instead it's just that there is a higher percentage of black convicts applying than white ones. The percentage of them being hired is the same - 0 % - .

So illogical and so wrong.

So illogical ...many including our President, can CHOOSE to identify with either race of interracial parents.

How many more vacation days for the potentate in the white house, living large whilst the rest of us suffer?

Amazing that this destructive, misguided jerk can focus in on little ol BMW while:

federal employees are slaughtered in their own consulate,

and, the IRS is beginning to act and sound like the KGB,

and, terrorist murder is glossed over as workplace violence,

and, he continues to campaign away from his office, thereby giving himself the "I didn't know" how the government was running excuse,

We are paying dearly for this executive of our country.

He continues to fail us.

The cost of his destruction mounts.

These are frightening times.

Massive racial differentials in account of wealth remain in the United States: between whites and African Americans, the gap is a factor of twenty.[146] An analyst of the phenomenon, Thomas Shapiro, professor of law and social policy at Brandeis University argues, “The wealth gap is not just a story of merit and achievement, it’s also a story of the historical legacy of race in the United States.”[147]
wikipedia

I want to know how many people with criminal records work in the White House?
The IRS?
The State Department?
On through the employment list in Washington D.C.?

@casual observer, I agree. How about the White House kitchen staff, secret service, Malia and Sasha's teachers, Air Force One pilot, housekeeping staff. I bet even the groundskeepers all have to pass a background check. This has nothing to do with Obama being black. It's about elitists not practicing what they preach.

Thats kinda what I was thinking...the German company(BMW) should learn our American history.

So, let me get this straight...

The US justice system charges, prosecutes and convicts a higher percentage of the black citizen population than white (per capita).

This results in a seemingly disproportionate number of black citizens with a criminal record than white.

The US justice system then turns around and sues BMW because in refusing to hire applicants with a criminal record, too many black applicants compared to white are turned down for jobs.

But, if "too many" blacks are being convicted of crimes, and this represents a "racial inequality"...shouldn't the Justice Dept really be suing ITSELF for creating the problem in the first place?

The US justice system ...mindset 50 years ago...charges, prosecutes and convicts ... the black citizen population ...for being black.

obama = does he not comprehend that any car company needs to make a profit to stay in business? Unlike the federal government, which allows its elected leader to do what he pleases with, apparently, no reprisal?

obama = never did understand economics and his learning curve has plummeted since assuming the presidential perks position. He just sells bits and larger pieces of the United States to, say, China, for operating capital.

the U.S. Justice Dept. with the 50-year-ago-mindset?
Run by black eric holder, correct?
holder being a separated at birth crony of obama, the gifted rabble rouser.

I know of several people who were violently assaulted by co-workers who were "former" convicted criminals.

They were unaware of the violent backgrounds of their co-workers, so they were surprised when they were stalked and assaulted at their residences.

The government paid the medical bills of the victims and put the victims in a re-education program designed to help them recover and move on from the violent assault, but the permanent physical disabilities that resulted from the violence didn't change.

Now, we have a US president suing a private company, so that these criminals can have more accessibility to unaware, clueless co-workers, who enrage the "former" convicted criminals by being productive citizens who abide by the laws.

Lets send all the former convicted criminals to Washington D. C. where the surveillance run by the U.S. government can keep closer tabs on them and lesson the harmful effects of re-entry into the general population elsewhere. And, natch, give these former criminals jobs on site.

Welcome to the Animal Farm

Read about his fight with Sheriff Arpaio in Arizona simply for enforcing border security. I might not agree with every act of Arpaio's, but at least he's maintaining law and order, which has to be tough in a border city. For the President of the nation to direct his Attorney General to go after a single county Sheriff while demonstrating an inability to govern his own branch of the federal government indicates a mental illness of some kind.

Reading other sources, I see this is in the South Carolina plant of employees who were transferring. Most had worked there for years, some decades. Then BMW brought in the new background checks with no distinction between felonies and misdemeanors, and no timeline on the infraction. One woman was let go after working there 14 years because she had a misdemeanor on her record from 20 years ago. The fine for such was $137. I think BMW knew blacks in South Carolina would more likely have something on their record than their counterparts. I would be interested to know if BMW refilled the positions or let them go...as in cut positions in a discriminatory manner and saved themselves some money.

How can we ever hope to rehabilitate criminals if they have little to no chance of ever finding gainful employment? Punishments for most crimes shouldn't last forever.

Fine, so you hire them, don't force others to. There should be no law to force people to hire people with a criminal record.

There should be no force in these matters.

The problem is it's illegal to discriminate against someone just because of a criminal conviction except in fairly specific instances-- i.e., where the conviction is relevant to the job being performed (people convicted of theft or fraud can't work at banks, people convicted of trying to poison someone don't get to work in pharmacies or hospitals etc.). The reasoning behind that is that once the person is not serving time in prison, their time has been served and their debt to society has been paid. To further inflict punishment on them after their debt has been paid is unconstitutional and anathema to a free and just society.

Furthermore, President Obama isn't suing BMW as the headline suggests-- the EEOC filed the lawsuit on behalf of the 69 former BMW employees who filed claims with the EEOC for discriminatory practices.

The system is working as it is intended to work-- protecting the innocent and hearing claims and counter claims in a court of law. Many of you folks who like to pound your chests about "law and order" and "freedom and justice for all" sure don't seem to care about the law or freedom or justice when it doesn't work out to your advantage do you?

As another commenter said, several of these people who filed claims with the EEOC had ALREADY been working for BMW for years and had very minor convictions that they'd served their time for decades ago, so depending on the circumstances of the case, it may well be that BMW management chose to "switch" contractors *specifically* so they could get rid of certain employees, 70 out of 88 of whom appear to have been black. That is what the lawsuit has been filed to determine. If no discrimination has taken place, then the court will find in favor of BMW and all will be white and well again in the deep south. I sincerely doubt that the EEOC likes to waste its limited budget filing frivolous lawsuits in federal court.

Furthermore, according to the EEOC, these suits aren't filed lightly-- quite a lot of investigation and negotiation takes place before any lawsuits are ever filed against any company, and then lawsuits are only filed when all of those steps fail.

And to directly pin this on Obama only reveals a bias, an agitator, or a racist, unless some source specifically mentions that Obama directed the EEOC to file the lawsuit and not officials within the EEOC on behalf of the 69 former BMW employee claimants (which I'm unaware of but that doesn't mean it doesn't exist-- does it exist? Anyone?).

The way this is presented is patently ridiculous, but since it's an opinion piece, we're all entitled to our opinions, no matter how wrong they may be.

YOU RIGHT WINGERS ALWAY S ACT LIKE IT HAPPENING TO YOU. A CORPERATION GETS SUED FOR BEING SLICK TRYING TO GET RID OF BLACKS AND YOU SIDE WITH THE COMPANY LIKE IT'S YOURS. Disparate impact is a reality. BMW KNEW THEY WERE GETTING RID OF MINORITIES WITH THIS POLICY. JUST CUSS YOUR WHITE AND DONT HAVE A CRIMINAL CONVICTION DOESNT MEAN YOUR BETTER QUALIFIED!