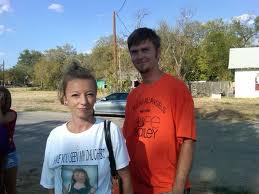 Where is Shawn Adkins today, and what has he been doing since the memorial?

These are two questions that might be of interest to Billie Jean Dunn, mother of murdered 13 year old, Hailey Dunn, and her future plans in life.

It may be of interest to Billie Dunn:

What has he done since the memorial?

To whom has he spoken to?

In a separate development, yet another relative of Hailey Dunn has been arrested, with a report of Del Ostrander, Billie Dunn's brother, whom some believe knew what had happened to Hailey, which is why he partied on New Year's Eve, 2010, instead of searching for his niece.

The parade of relatives of Hailey Dunn's who have marched to prison has included her mother, her father, her grandmother and assorted uncles, cousins, and what-nots, revealing the character of the family life Hailey was subjected to before her death.

Hailey Dunn's remains were found this Spring, after being going missing on December 27, 2010.  Her mother, Billie Dunn, and the mother's boyfriend, Shawn Adkins, both failed their polygraph tests.  Statement Analysis showed guilty knowledge on the part of the mother, as well as unreliable denial from the boyfriend.

Later, we learned that child pornography, drugs, and violence were a part of the home life of Hailey Dunn.

We await news of arrests of the only two named Persons of Interest in the case:

Peter Hyatt as Statement Analysis Blog at 1:43 AM

When are these dam arrests gonna happen!!! Peter what is FBI wiying on!!! And Curtis what can he say now ? Is is Gag order expired!!!! We need to put thevpressurebyet agin !!!

I thought they once said that they just needed a body to make the arrests. I was hoping that was true.

I was hoping the same thing!!!^^^^^ body found and no Arsetts

Since Hailey's memorial, Billie has been partying with Shawn

They were reportedly spotted at wal-mart in Austin by an unknown source. Soooooo while her deceased daughters remains are still at the lab, she and her partner in crime continue to move on with their lives. For those who think she is innocent WAKE up, stop protecting her. Hailey NEVER left that house after Sunday, Shawn and Billie were the last to see her, and she was found in a field...dead. Common sense. Also, LE called it EARLY in the case, saying she was most likley deceased, and what do you know they were RIGHT. Hmmm maybe they are RIGHT about who dunnit hmmm.

@Turtle...I read that too on another site, that BJD and SA were seen together recently at Walmart. They're saying the report came from someone very reliable. If they're back together, if in fact they ever really broke up, then he's not going to cut a deal and spill on her.

Re: Del...About the charges - this was posted at another site. I'm not crediting the poster because it was a Facebook site with her full name used and I don't know that she'd want her name broadcast. She's registered on Vineline.com where she can get updates on inmates.

"Del is still in jail. Taylor CO. is holding him on the 3 charges out of Mitchell CO.
do you really think someone could pay the bond he has? the charge is in Mitchell CO.
Manufacturing and delivery...50,000.00 bond
2nd charge Evading arrest w/ vehicle bond 7,500.00
3rd charge Criminal mischief bond 1,000.00.."

He is someplace that his attorney and BD can find him easily.

Does Shawn have a cell phone? I'll wager that he changes the phone and/or the phone number frequently.

He doesn't want LE to be able to keep tabs on him via his cell phone and have a way to track his movements. He's too smart for that.

Trigger~
If SA is using temporary cell phones, it merely makes him Wise to the capabilities of Law Enforcement.........it Certainly does NOT make him Smart!

I agree sly as a fox dose not mean he is smart.

He's not smart. SA is a better listener than BJD is all.

"temp" cell phones can be tracked just the same as regular phones..... think about 911 emergency calling.

Would LE need a warrant to track Shawn's cell phone? Excuse my ignorance, I don't know the the law.

The best predictor of current and future behavior is past behavior. Therefore, the best guesses are that Shawn was viewing very warped pornography, obsessing over extremely violent true crime stories, playing with his serial killer masks, taking illegal drugs, smoking pot from a pipe, lying to the sheriff, screwing an ugly, drug-addicted whore, and/or raping and killing another little girl.

I don't think charges will ever come. Too much time has passed.

I think there's something bigger. Possible corruption with LE.

I am disgusted that they haven't been arrested. My faith in justice is GONE when two people can murder a child and walk!

There will be recompence for Hailey Dunns Death.

The GUILTY will pay no matter what they say ,

There guilt has stained there essance an they will never clean it away.

For there crime they cannot pay there is no charge for takeing ones Daughters life away.

No reconpence in life will they pay oh yes there freedom will for ever go away .

An in a cell be forced to stay stare silent dureing the day think of the life they tossed away.

Then in another time you say when your life force has gone away .
There is another one to say of all the sins you did say.
Of all the actions when youd play an think of prey that you could slaughter to get youe end away.

Not even the SLAUGHTER of your own DAUGHTER nae.

A sin like that is never washed away no matter if you pretend to pray.

Yes you shall pay on JUDGEMENT DAY.

Eco to heard to to spell your name with auto correct. Chill for goodness sakes.tfreakin chill.

Does Shawn have a cell phone? I'll wager that he changes the phone and/or the phone number frequently.
He doesn't want LE to be able to keep tabs on him via his cell phone and have a way to track his movements. He's too smart for that.

I'd say chances are he has a throw away phone.

And WHY has neither really been questioned? We all know Hailey was murdered on the night of Dec. 26th!

SA and Billynotdunnothing are getting away with murder. They apparently are never going to be charged with anything. Pointhunter, can you contact your friends at LE and get rid of that pesky gag order. I miss your posts. What this case needs is some o dat fine TX vigilante justice.

Justine where is Ayla u fk.

Still cant get over the big smiles on their faces in this photo.

Like they are getting ready to do a fund raiser.

Texas kickass justace. Where are the law abiding peeps of the proud land of texhas. Pointhunter please...what is going on down there. It seems like..I don't know..something..

bigmtn said...
Texas kickass justace. Where are the law abiding peeps of the proud land of texhas. Pointhunter please...what is going on down there. It seems like..I don't know..something.

I have faith Justice is still coming.

Video has been added so you can see Del Ostrander speaking (body language) and hear him speak with his own words, which could have been cleaned up.


"I don't have no kind of involvement with my niece missing,"
"The day she went missing, I was in county jail," he said. "I got out of jail that day."

"I was okay until they started reading that piece of paper, and then"

"Then they started showing the pictures of her,and" he continued. "I couldn't take that stuff. I had to get out of there."

I really am glad none of these white trash baby killers live near me. I would be in jail. How are they safe running around Walmart and living life. Maybe LE will work faster if suspects get killed.

Too many dead bodies found in the area near the time of her death for them to pin it on the person that looks the most guilty.

One near the airport, off the Interstate, and now her-from a town where the 'missing' circus once came to a head leaving a couple dead.

I think SA ratted BD out, made a deal, told where the body could be recovered ..and is now wired for sound.. some how. I hope they are able to retrieve a lot of evidence from Hailey’s body.

I hope you are correct that he has been telling everything he knows. But you are incorrect that he told them where to find the body. He did not start talking until after the body was found.

Blaze said...
I think SA ratted BD out, made a deal, told where the body could be recovered ..and is now wired for sound.. some how. I hope they are able to retrieve a lot of evidence from Hailey’s body.


IF THAT WERE TRUE, THERE WOULD HAVE BEEN AN ARREST BY NOW.

THOSE TWO GOT AWAY WITH MURDER.

If you truly think they should be killed then why don't you stop running your shit filled mouth and do it. Im sure they aren't hard to find.