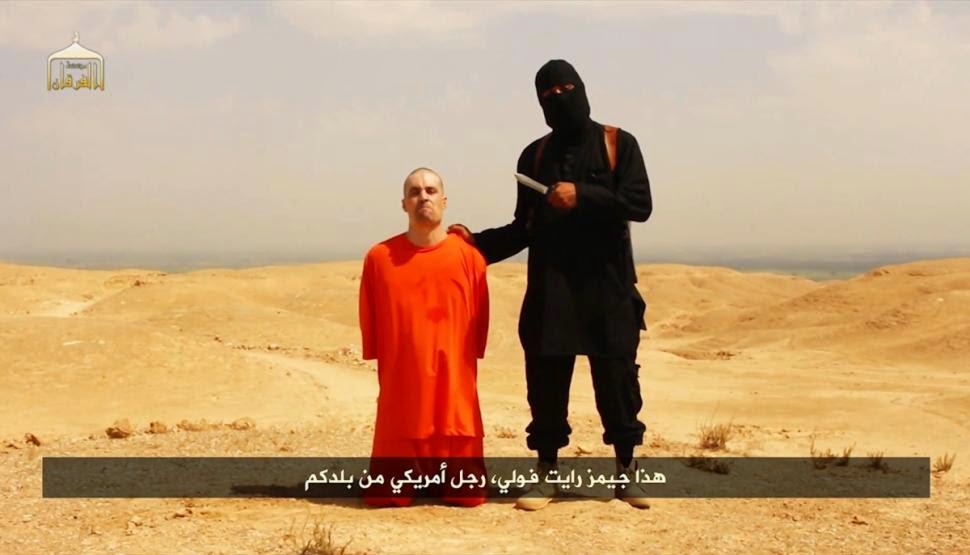 The text says they offered prisoner exchanges of Muslims for the journalist James Foley.

This must be laid at the feet of Barak Obama who traded Muslim prisoners for a hostage, something Ronald Reagan had the courage to refuse to do.

This weakness has caused the deaths of countless Christians in the Middle East, as the enemies of America have been emboldened by the balking of Barak Obama.

How many more will die as Obama golfs on endless vacations?

How many more journalists will die?

Who is next in this savage religion's quest for  world "order" and domination?  The hatred of the Jews is pathological.  The subjugation of women's rights is spread wherever Islam takes root, in cultural declination.

The full text is found here:

http://www.globalpost.com/dispatch/news/regions/middle-east/syria/140821/text-last-email-islamic-state-sent-foley-family
Peter Hyatt as Statement Analysis Blog at 7:30 AM

something Ronald Reagan had the courage to refuse to do.
http://en.m.wikipedia.org/wiki/Iran–Contra_affair

"Handwritten notes taken by Defense Secretary Caspar Weinberger on December 7, 1985, indicate that Reagan was aware of potential hostage transfers with Iran, as well as the sale of Hawk and TOW missiles to "moderate elements" within that country.[10] Weinberger wrote that Reagan said "he could answer to charges of illegality but couldn't answer to the charge that 'big strong President Reagan passed up a chance to free the hostages'".[10]

On March 4, 1987, Reagan returned to the airwaves in a nationally televised address, taking full responsibility for any actions that he was unaware of, and admitting that "what began as a strategic opening to Iran deteriorated, in its implementation, into trading arms for hostages".[13]

"Endless vacations"?? Surely you are aware that President George W. Bush took approximately 5 times more vacation days than Obama. Right? Obama has vacationed a lot less than Ronald Reagan, also. It doesn't take an expert in statement analysis to detect the huge amount of partisan bias dripping through so many of your posts.

I've been following your page for years. I wish you would lay off the political analysis and commentary and stick to true crime.

"A few months ago, I told the American people I did not trade arms for hostages. My heart and my best intentions still tell me that's true, but the facts and evidence tell me it is not."

Peter, if I had a blog/website, I would talk about whatever I wanted to, and if the readers didn't like it, I would assume they could move on to elsewhere, where they did like it. It's not like they are paying for this, right?
MOO

(Liverpool reg on here but I avoid Google and don't "sign in)I wish England Uk had people such as you speaking words WE'RE unable to speak.Thank you peter

I've been following your page for years. I wish you would lay off the political analysis and commentary and stick to true crime.

I doesn't matter, be it politics, violent crime, etc. We analyse the words, not the person.

"The subject is dead, the statement is alive."

How many died when George W. Bush ordered our military to attack Saddam Hussein and Iraq, accusing them of having WMDs knowing they had none and blaming the attack of the WTC on them when they had nothing to do with it? How many of our precious military did HE cause to be killed and/or maimed for life? How many Iraqis' did HE cause our military to murder maim and destroy, their elderly, men women and children?

Better that HE would have been playing golf than lying to us and the whole world!

The funniest thing of all this statement analysis John, is, The subject is ALIVE, (very much so); it is the statement that is dead! Deader than hell~!

Who are these "anions" to tell you what to think and write on your blog.

Only bullies do that sort of thing.

Who are these "anions" to tell you what to think and write on your blog.

Only bullies do that sort of thing.

The funniest thing of all this statement analysis John, is, The subject is ALIVE, (very much so); it is the statement that is dead! Deader than hell~!

We are not talking literally. In some case's maybe, they may well be dead.

It is not principle 101. Dead or alive, it is always the statement NOT the person we Analyze. This then can give us an insight of the person that is being SA analyzed.

John- I think Anon's point is that in this post, it seems there is criticism about Obama "the subject" and not any actual analysis of a statement.


Buckley said...
John- I think Anon's point is that in this post, it seems there is criticism about Obama "the subject" and not any actual analysis of a statement.

I am the anon who spoke about the criticism of Obama. It's just a comment, an observation. Move on.

BUT..i agree Obama IS a liar.

Why was a (probable) deserter more important than this journalist? He opened the flood gates with his lopsided, absurd trade.

Ronald Reagan had an effective foreign policy that made us stronger against the USSR in the Cold War and kept us out of "hot" wars. However, he did attempt to trade arms for hostages, did give arms to the enemy, against the instructions of Congress, and lied that he was unaware of any of it.

Ronald Reagan ALSO destroyed secondary higher education in this country for the orphaned minor children whose providing parent had died prior to their attaining eighteen years of age.

Under Reagan, the surviving widow(er) was left to find another way, if at all, to pay for the childs' education after the minor reached age eighteen and graduated from high school, or until age nineteen if the child had not yet graduated 12th grade.

This Reagan act directly robbed the EARNED SS Benefits that had been paid by the deceased participant and had accrued for the widow(er) of minor children to be able to send their child(ren) to college; which benefits previously had been until the dependent child reached the age of 22 years of age and had attained four years of trade school or college.

Thank Reagan for the MANY uneducated people in this country today who were not financially able to attend college or trade school after losing a parent due to HIM abolishing their Social Security educational benefits.

There are laws in the Bible against robbing the widow and orphaned children, and for all those who turn a blind eye. If Reagan and his confidants and all those who worshipped him haven't already paid for robbing them they surely will in time to come.

Whether on or off the golf course, Obama is not the savior of the world; nor can he be everywhere all at once, or make every decision for everybody in every situation.