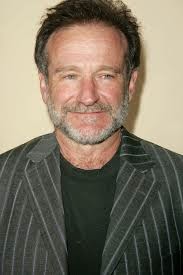 The details of Robin William's suicide were released as part of a public office standard work.  The public outcry, the coroner's office explained, only comes when the death is of a celebrity, of whom the public becomes defensive.  Keith Boyd, spokesman, said that they experienced severe backlash over the information of Michael Jackson's death.

He was suspended, as I indicated, from the belt, which was wedged between the door and the door frame . . . in a seated position, slightly suspended off the ground,” Keith Boyd said.

Asked if Williams left a note, Boyd replied, “We’re not discussing the note, or a note, at this point as the investigation is ongoing. That information will be discussed at a future time.”

We should assume that he was asked, as the statement indicates, if he left "a" note; not presuming that a note was left.

In Statement Analysis, there are two instinctive forms of speech:  Pronouns and Articles.  These are exempt from the principle of "personal, internal, subjective dictionary" that we all have. They do not need clarification and do not change, person from person.  (Time on a clock is considered objective also).

This is an example of "leakage" in language, where a subject gives out information that may have been unintended.

Peter Hyatt as Statement Analysis Blog at 6:58 AM

'These rumors r absolutely ridiculous! I would never throw money in anyone's face or act that disrespectfully. I was raised better than that [sic],'

He was suspended, as I indicated, from the belt, which was wedged between the door and the door frame . . . in a seated position, slightly suspended off the ground,” Keith Boyd said.

Asked if Williams left a note, Boyd replied, “We’re not discussing the note, or a note, at this point as the investigation is ongoing. That information will be discussed at a future time.”

Yes, saying "the note" leads us to believe there is actually a note. Also, "that information will be discussed at a future time", also leads me to believe there probably was a note. If there was no note, there wouldn't be much to discuss.

Abigail Hernandez' violent abduction, unspeakable violence. (Fyi, there isn't actually any descriptions of her abduction or violence in the statement.)

OR the use of "the" following shortly after "we" means he realizes there aught to be a note to make the story convincing. but he needs to get everybody else on board before he can falsely report on one.

Also during the press conference, Boyd later distinguished between "clothed" and "FULLY clothed" when he responded to a question asking for clarification.

I did not hear the question that prompted his response about "the note, or a note" .....but wonder if the definite article "the" was contained in the question - or if that would make any difference in his reply for SA purposes.

Boyd said "I said he was found'clothed' - I did not say he was 'fully clothed' when he was found."
This response seemed rather odd to include while the department has been careful to withhold plenty of other information "at this time".

it's being reported that he left no note, I for one DO think it was murder, and there is a coverup

if snowden was a real whistle blower and the NSA really is currently spying on every move we make and listening in on every phone call email and text. why is it not way easier to solve loads of violent crimes and missing persons???

I'm now thinking Snowden was a fake whistleblower -- and the government wants us to believe he's saying things they don't want him to say -- but really they want us to believe every word. they want us to feel we are being watched at every minute. any school teacher or theft prevention specialist knows inspiring this fear that every move you make is being watched is a more effective tactic than actually attempting to watch everybody at all times,

why do you never include a link back to the source of your posts? I will never understand that.

naomi wolf has written about it a few places

Something about the Robin Williams situation does not compute for me. It seems if someone were hanging themselves that the body would naturally react, panic and an attempt to breathe and yet he was only inches from the floor. So the mechanincs of that scenario don't add up. Also the superficial cuts on his arm. I just can't wrap my mind around it.

Unless he took something that made him go unconscious and he slid down the door at that point. Again, doesn't seem logical or even doable!

I don't think he's a fake, but I definitely do see what you're saying in your firsr paragraph.

The lack of a note would be the norm according to http://www.suicidefindinghope.com/content/suicide_notes
It sounds as though there is a note which may help RW family with closure - a bit. He has reportedly had a long struggle with depression. It is terrible to hurt so much that death is a better option than the pain of breathing five more minutes. I hope increased awareness, understanding, and help for people who experience suicidal depression comes from the extensive media coverage RWs death is getting.

Red Ryder,
I so much appreciate your kind words of hope. I share your sentiment. None of us, even if we also suffer from depression to one degree or another, KNOW anything about what was going on in RW's head nor the psychological pain within him.

I am deeply touched & troubled by his actions partly because on the very day that he came to the end of his ability to hold on, I was in the depths of a deep, dark & scary depression. And I live not far from Tiburon. I found all of this to be unsettling & quite scary.

Anonymous, I am sorry that you are/were in the dark pit. All I can share is that there are people who understand, there is something that can help (medication, therapy, and sometimes just time itself), it is a journey to get there. Keep breathing~Red.

I have lost a sweet young nephew this year. He ended his life by hanging himself with an extension cord in their family garage. My sister and younger nephew of 11 found him early one Sunday morning. He had lived with emotional and behavioral problems for several years being hospitalized many times. His girlfriend had broken up with him just hours before and an empty bottle of alcohol was found in the garage. He spent his last minutes on Facebook making sure he issued 'friend requests' to all family members; my younger daughter was the final entry.

The detectives and the coroner came to the home. They told us it was evident by the body and chair positioning that my nephew could have stopped it at any time. He was so determined to die, he resisted the body's urge to self-survive. I believe the alcohol sedated him enough to sap him of the physical and mental strength to fight. It was said this week that most suicides involved the dangerous pairing of substance abuse and depression.

(((Hugs))) ima.grandma. And prayers for your sister and nephew. It is so painful to lose someone so young, and to know what pain they lived with. Heavy sigh..