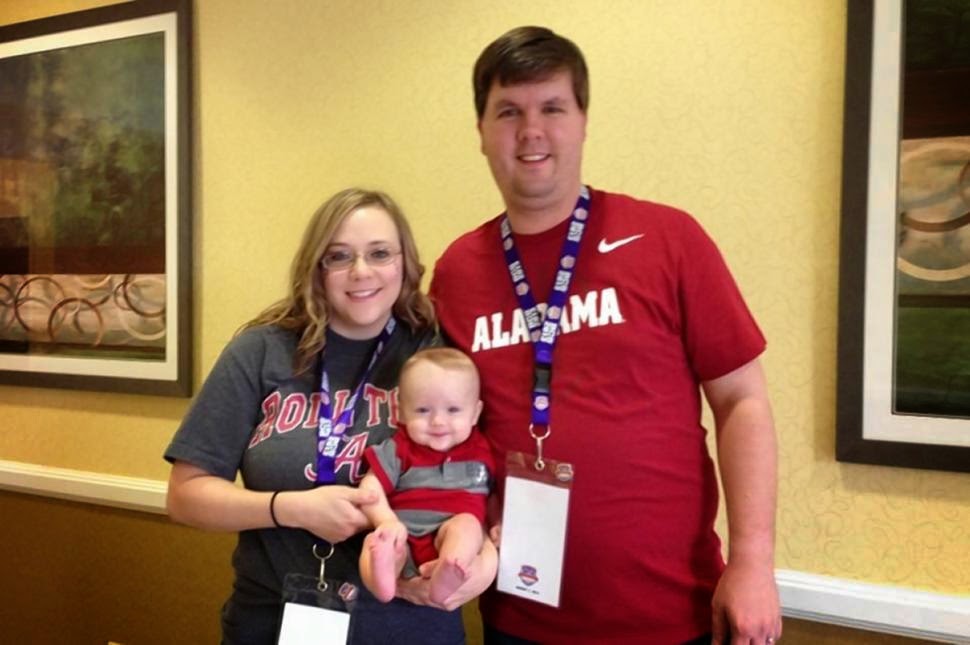 Leaana and Justin Ross Harris both admittedly researched how long a baby would live in a hot car just prior to...(cough, cough), the baby being killed in a hot car.

Justin Harris is charged in the murder, and the mother, Leanna, went on television praising her husband as her "leader" and "loving" father, in spite of Harris' many ongoing affairs and e-affairs.

Now, her attorney says she passed a polygraph.

She was just a victim of extreme happenstance.  It's like texting a mother saying, "Golly gee, I hope no one kidnaps our baby" only to find a kidnapping happen weeks later.

They reportedly failed, failed and failed again, until they found someone to 'pass' them, only to have their attorneys have the polygrapher sign a non-disclosure agreement:

He was not allowed to even say what questions were asked.

"I did not have sexual relations with that woman, Ms. Lewinsky."

Had President Clinton been asked, "Did you have sexual relations with Ms. Lewinsky?" under polygraph, he would have passed.

Everyone of us has a personal, subjective, internal dictionary.

Had he been asked, "Did you have sexual contact with Ms. Lewinsky?" the stage would have changed, dramatically.

Is it possible that Justin Ross Harris, in his "leadership" role, had his wife do internet searches to 'set her up' for his desire to be child-free?

Yes, it is possible.

This may be why police did not charge her.

She may not be the sharpest knife in the drawer.

Did she take a polygraph for law enforcement when the case was first investigated?

This would hold more weight for us, especially if the polygrapher entered into her language, with a solid pre-screening interview.


Peter Hyatt as Statement Analysis Blog at 7:36 AM

That vehicle should have been 'any' vehicle.

Zimmerman says Harris responded "no" to each of the following questions:

— Prior to June 18th, did you know that your husband would leave your son in that vehicle?

— Did you plan or arrange with your husband to leave your son in that vehicle?

— Did your husband tell you that he was going to leave your son in that vehicle?

Leanna Harris faces no charges in the case.

I wonder if she would have passed if they had replaced That vehicle with any vehicle?

If they had more than one vehicle they could have planned it to be in the other vehicle or used some other method.

I would have asked did you and your husband conspire to harm your child?

Did you and your husband conspire to kill your child?

Did you know your husband was going to harm your child?

Did you know your husband was going to kill your child?

Polygraphs can be passed even when the suspect is guilty or has guilty knowledge if the right questions aren't asked.
It is a lot harder to pass an interview with a statement analyst as they ask the right questions based on the subjects personal dictionary.

"She believes it was an accident. There's no doubt in her mind," [her attorney] said.

Is there doubt in her attorney's mind?

Prior to June 18, did you know that your husband would leave your son in that vehicle?

She could also be convinced that she didn't know for sure that he would go through with it on that specific day or ever.

Agree "that vehicle" seems to be oddly placed in all the questions to give her an out. They may not have decided which vehicle would be used.

Why didn't anyone notice the Harris boy in the car alone for such a long time on such a hot day?

Didn't anyone walk by the car and see him?

Didn't Harris back his car into a parking space in the very back row of the lot between 2 cars that had already been parked for the workday?
This was a strategic, pre-planned move. The single fact that he brought 2 co-workers with him during lunch break to witness him toss a package into his car, should get him the Death Penalty. This murder was planned with malice and aforethought, and has plenty of mitigating factors.

Ok, just to play the devil's advocate... suppose he has done this before? It is more common than you'd think that people forget babies in cars. Suppose he has done this but remembered in time, and there was a large argument about it. Maybe the wife looked it up to impress upon him how quickly it could be fatal. Maybe he looked it up and read about it, too. Maybe he was sure he'd never do it again, and then....
I'm not saying this happened, or that I think it happened, I have no idea in this case because I've not read about it, only seen the headlines and heard second hand what happened, but this is a scenario that could explain why someone would have looked it up prior to it happening and yet it not be a case of premeditated murder.

And you would look up "Living a child-free life" because.....?

And you would be sexting with underage girls while you baked your toddler in the backseat of your car because.....?

I think if he (or either) had done this before, it would have been the first thing out of their mouths.

@Trigger: Harris got to work around 9:30 am, after many of his co-workers were already there. He then backed into a space which had another car on one side and open grassy area on the other side. Cooper was in a rear facing car seat which means he wouldn't have been easily visible to anyone walking past the front of the car. The time and manner in which he parked are part of the reason the death is suspicious, as it appears Harris took precautions so Cooper would not be easily discovered.

Ross Harris, his atty speaks to press, after his indictment. Dated Sept 4, 2014.

Harris, his atty names off each charge,he within adding dramatic theatrics. He to understand our nation is watching. This is a High Profile Case. The only victim, Cooper Harris.

He states the theory's tactics of the State attempting to paint the Harris couple into a corner.

How much influence is the case of Casey Anthony going to be upon the trial of Ross Harris? the Jury to be.

Jose Baez, in closing argument: "the Defense has no burden to prove anything" http://youtu.be/muVATnlDh_8

JB: My biggest fear, this case deals with so much emotion. The law gives us a guidance, to what we should do in times of, so many emotions. The jury, your rules of deliberation, what the Law is.

JB: Political incorrectness used upon you the jurors, by the State using Caylee (the innocent) to invoke your emotions: in place of the evidence presented. (sic) This Case must not be decided for or against anyone because you feel sorry for anyone or are angry at anyone. Base your verdict on the evidence not emotions.

JB: that the State within political incorrectness attempted to paint Casey Anthony as a slut, as a party girl, as a girl who lies, it has absolutely nothing to due with how Caylee died, and you would dishonor the law and even Caylee's Memory, if you were to base your decision on anything but the evidence, and (The State) to use emotions to get you angry is improper.

As he, Bayice first said, the defense has no burden to prove anything. This in contrast to Ross Harris's Atty's own statement.

As he uses spin, emotions, preacher voice, his personal opinion tossed in. Within each charge upon Harris, via the State. He is seeking what audience (jury) in his theatrics, pandering? He to placate the indictment charges into a witch hunt. As if the State is procuring nonsense. As if Harris, his wife are being victimized by the State, public. He in detail spews kettle upon each charge, as if the charges are trumped up. All is non relevant to the leading up to, and day Cooper did die a horrific death in his fathers car, parking lot of Harris's work.

What he does not say is my client is innocent. His atty using emotions, this is a salacious victimization via the State, via the public's reaction, opinions.

He to lastly state of the persons who are supportive of Harris, his ace? he is going to use the cyber petition stories in his defense? The petition, of 11k+ signatures, firestorm, upon his arrest. The Petition to Free Harris.

A person of political correctness created the online petition upon zero knowledge. They NOT knowing the details of why Harris was arrested. Thousands to jump on the bandwagon screaming what if this happened to you? parental forgetfulness. Persons to write their own stories of the time they left their kid in the car, it was an accident.

I am curious why they are not seeking the death penalty. A deal of some sort perhaps?

True but you really need to read more about dad. You'll change your mind. If both parents looked it up out of concern wouldn't they be extra paranoid about it? Not lax?? Plus he had breakfast with his son and then drove just a short way to work. Plus the daycare is right by work. No way he forgot.

Dad parked the car in a way that no one would see him.