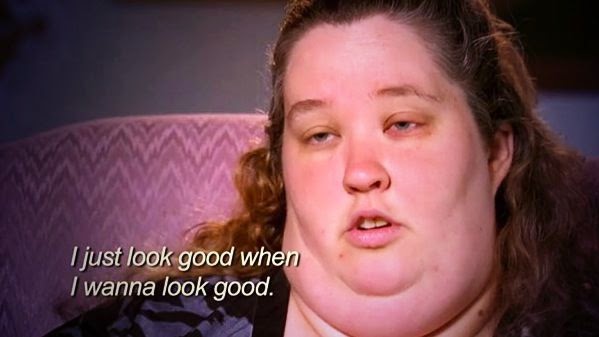 There is a television show about an overweight, ill-mannered child, called "Honey-BooBoo" which airs on a network advertised as the "learning" channel.

Recently, the show was abruptly canceled when it was reported that the mother, "Mama June", has been with a man who sexually abused children.

Has the mother been involved with a child molester, making the network's decision justified?  We can know the truth by listening to what the mother, "Mama June" wrote.

This may be a strange example, especially for those of us that have not seen the show, but language, no matter what the sample is, reveals truth.

If you were Mama June and you did not engage in a relationship with a convicted child molester, what would you say?

Many deceptive people will say "I am innocent" or "I would not", but avoid saying "I did not..."

A deceptive person will, in more than 90% of the time, avoid the stress of a direct lie and issue a Reliable Denial (RD) when, in fact, they cannot say it without lying.

Let's see if the mother plainly tells us that she did not become involved with a child molester, causing the net work to cancel the show, and lose money on that which has already been filmed:

The mother made this statement online:

"I want to make a post trying to clear up the rumors remember you can't believe everything you read!" she wrote. "Ppl sell stories to the tabloid everyday that r false! It isnt true i promise my kids r #1 priority over anything else and I would never put them in danger period over this or anything else they r my life this is my past I left him 10 yrs ago for it and I wouldn't go back."


Here is the post again, with emphasis added, and Statement Analysis:


She tells us what she "wants" to do; which is distancing language.  Note also she does not "deny" the rumors, only to "clear them up."  She does not tell us that they are false.

this is a truthful statement.  It continues with her theme of distancing language.  "you" can't believe everything you read.  Here is where she can issue a reliable denial.


"Ppl sell stories to the tabloid everyday that r false!

this is also true; people also sell their stories to television, as well.
She avoids issuing a reliable denial.


Since she spoke about "rumors" in the plural, she would need to clear up which "rumor" is not true, and which ones need to be "cleared" up.

i promise my kids r #1 priority over anything else

note the need to "promise" weakens the assertion and is the language of deception.


and I would never put them in danger period over this

This is close to being an admission of guilt rather than a denial!

This indicates knowledge of other things ("anything else") that the public would consider risky to her children.

they r my life this is my past


She does not say "that was my past", but "this", again, as close.  "That" would have shown distance.  Instead, Mama June shows closeness to the situation.

It may be true that she left him 10 years ago, but she is unable to say "I didn't go back to him."

This statement indicates that the "Learning" Channel's decision to drop her, due to her relationship with a child molester, was likely based upon strong evidence that she did engage in a relationship with a child molester that endangered her children and the network did not wish to be associated with her any longer, so much so, that they would be willing to lose the money spent on the season already filmed.

Thought some of those same things about her statement. Can't help but wonder if intelligence of the subject can skew the reliability of analysis. I would not expect her to be smart enough to speak on her own behalf effectively.

i promise my kids r #1 priority over anything else

She says "anything" else, not "anyone" else.

Interesting that she adds this to a statement that others will read on the internet. Is she telling us not to believe what we read?

oi promise my kids r #1 priority over anything else

She says "anything" else, not "anyone" else.

Interesting that she adds this to a statement that others will read on the internet. Is she telling us not to believe what we read?

What is "it" that she can't bring herself to say ?

TLC has not been advertised as The "Learning" channel for about ten years. I hate when people use that argument lol.

I find this to be so sad. In the show, June really did appear put her children first. When the show started, they were very poor. As the show continued, money helped improve some things. Unfortunately, like so many reality shows, money comes in and common sense goes out.

Since the statement from June, her oldest daughter, 20, has made a statement that SHE was the child who was molested. June's daughter. And her mother promised her she would never go back to the disgusting creep. The daughter is crushed. The report stated that TLC offered to provide counseling to this daughter.

This is very real and tragic. I hope the family gets help..

honey booboo herself is a brilliant performer and comedian. she's also hardly unhealthily over weight for a little kid, she's just got a little belly and is not toned like jon benet style child beauty queens. and her comfort with her body is an important part of her charm. insulting her body is ridiculous.

as for the mother's statement -- I'd guess she was herself a victim of child abuse as a kid - and is currently involved with a guy of similar abusive nature as that pat of her grew accustomed to. her statement makes me think so,

Anon #1- I dont think intelligence, or lack of intelligence, affects their language. The truth is simple, easy to speak, and straightforward.


I read her comments earlier and caught some of the red flags. I also saw a picture of her and the man together in a hotel room. The picture was taken by a friend.

That show was horrid. I am glad it is done. I hope none of the children are molested by him.

Remains found last week have been confirmed as Hannah Graham.

Anon, whether you like it or not, Honey BooBoo is an ugly little fat girl, not her fault, but true; who also plays at being a cutsey sassy back-talker to her parents and other relatives, again not her fault; but neither is this cute, nor is she. It is NOT cute for any child to have this kind of influence over other kids, causing them to think it's peachy-creamy to argue back with their parents. The little piglet needs to be shut up with her gross fat mouth.

I watched this show once for about 15-mins and felt like gagging. This mother is an ugly gross fat-hog who delights in being stupid and illiterate, which she also thinks is cute when it is not. Ugggh!

This nasty family reality show was an insult to the intelligence of Americans who still have a little intelligence left. Glad to see it cancelled once and I hope, for all. Hog-Mama June went back to a child molester and rapist, who molested her OWN daughter? Not surprising at all, the lyin' nasty hog.

I have not seen the show, but I know that the child is called Honey Boo. Yes, she is overweight (judging by photos), and she may even be ill mannered.

However, we as adults, shall not talk about an innocent child like that.

If she is fat, or if she behaves bad, the fault lays with her parents!

The overweight, ill-mannered child is a result of her parents.

Sadly, these two attributes, among a few others, is why the family got on television.

I SAID it wasn't her fault, but I don't care whether she's an innocent child or not Charlotte, she is still a little hog walking in her mamas' footsteps and enjoying every minute of it.

When I was her age I was most definitely aware of my surroundings and knew that I did not want to imitate my mother or anyone else I was closely related too.

I made it my childhood mission to see that I did NOT fall into their footsteps and honey boo can do the same, IF she has sense enough to do it; which, I highly doubt as you can see how much she just LOVES all the attention she gets for her ugly raunchy root-hog-or-die misbehavior.

As for hog-mamma June, take a lot at her doped up eyes in the photo... If this isn't dope it sure is one hell-uv-a lot of booze and her claiming to be a 'mother.' Nasty thing.

is she old enough to read this??

It's sad. Her daughter says she wouldn't feel betrayed but would be hurt? I wouldn't just be hurt. The daughter moved in with her grandmother after it happened because the mom told her she didn't believe her and asked her how she could do that to her? He went to prison for molesting a different child. Does she not believe that child as well. She is an even worse person than I ever thought she was. I hope hey open an investigation to make sure she didn't bring her youngest around him. Horrible.

Thanks, Kathead for the response.

I know what you mean, in this case you are right on. I still wonder how analysis is used on those whose IQ is marginal, on either end for that matter.

I worked with adults with developmental disabilities and have even used written statements.

Where there is communication, analysis can be done.

I even had a case of a delusional subject who went back and forth from reality to fantasy (demons, angels, werewolves, etc).

I noted a pattern, and worked off the pattern.

IQ up or down, along with other issues, sometimes will cause the reference point to move, but once a norm is established...

Thanks, Peter, that is helpful to know.