"Wise As a Serpent: Gentle As a Dove" in Kindle Books 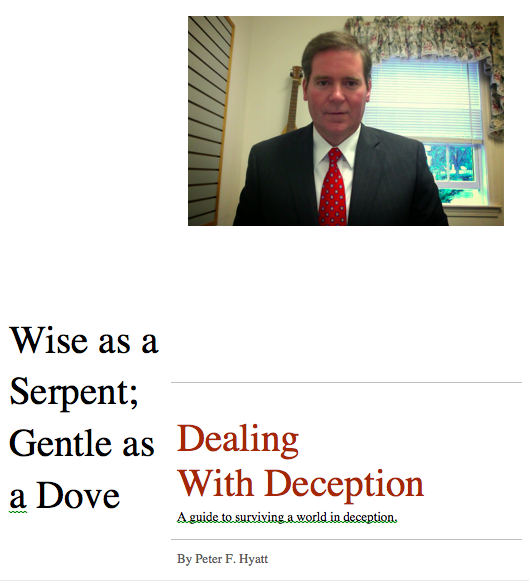 Amazon has it now:

Wise As a Serpent; Gentle As a Dove: Dealing With Deception

I'm glad you've written a book Peter. I've just downloaded it to my IPad. I've been following your blog for a couple of years now and only made the infrequent contribution. I've studied the subject for a while and your writing has been an inspiration as have all the comments from the readers. Buying your book is a small way of saying a BIG thank you for all the free information you have shared with everyone. I'm looking forward to reading it. It's 11.06pm here in the UK now. I've a feeling its going to be a long night....

A guide to surviving a world in deception.

Weird, but my mind wandered...should it be "in deception" or "of deception?"

I put it on my Kindle and this is weird... I'm obviously conditioned to comment after Peter writes, but there's no place to post after each chapter. Haha.

Theres a new documentary out on edward snowden. lots of stuff with him talking and behaving. ive come to believe hes performing. i think he never stopped working for the cia. i think he has an agenda. and tho what he's saying about the nsa may be partially or even all true. i think what the nsa us doing poses its biggest threat actually ti the cia with their spying. and thus the psych ops to attempt to rally the people to shut it down. anyway. watch film. see if you dont start to have doubts about him yourself just from statement analysis.

Sandy Parsons — the adoptive father of missing teen Erica Parsons — took the stand in his own defense Friday during his trial on federal fraud charges and deflected blame to his wife, who earlier took a plea deal on the same charges.

Could this be the beginning of who will throw who under the bus regarding missing Erica ?

Anonymous said...
A guide to surviving a world in deception.

I have just downloaded your book on Kindle :)

I just downloaded it. I can't wait to read it.