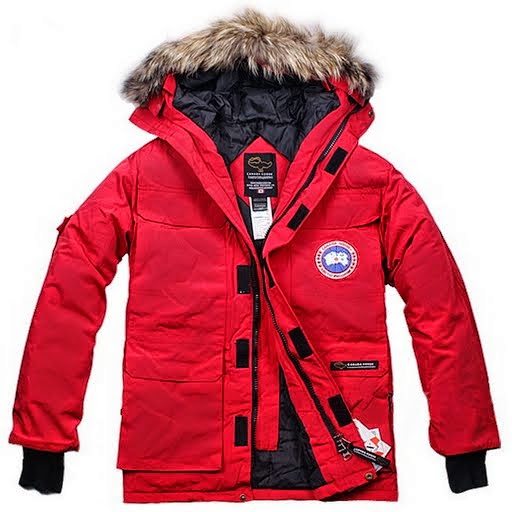 This past week, we were in Georgia, conducting a training, and it was 72 degrees, while the kids were home, with school canceled due to yet another Fall snow storm.  The morning after getting home, it was a balmy 7 degrees F for us.

Canada Goose makes high quality warm jackets.  They are made in Canada, since the 1950's, with the exception of their gloves, which are made in China.  The parkas are expensive, but customers claim that they are not only warm, without the constant losing of down feathers after a few seasons.  Even used, they are costly.

A few years ago, the price increased dramatically after a movie showed a star wearing one, and they became a status symbol in Canada.

Like many status symbols, a "anti-establishment" backlash developed where it was no longer vogue to have a Canada Goose.

Like many swings of a pendulum, equilibrium prevailed and people went back to not hating Canada Goose because the jackets, albeit expensive, were still warm and long-lasting due to the high quality of the product.

Canada Goose has fought a fierce battle against "knock offs", particularly, in China, where instead of down feathers, knock offs were found to have newspaper clippings, and worse, chicken feathers, which could cause disease.  Lawsuit after lawsuit, Canada Goose has spent a fortune in legal battles. If you search "Canada Goose" on Ebay, note how many are advertised as "100% authentic", "genuine" and even at times, "110% authentic"!

Canada Goose had to make a specific design label to help customers discern between the fakes and the real thing.  A short search on "cheap Canada Goose" will reveal a host of knock off websites.  It is an expensive battle for them.  As Martin Guitar learned, painfully, the government and courts of China will not afford them any protection from intellectual theft.

Last year, Canada Goose sold a majority of its business to Bain Capital.  Since CG employs approximately 1000 employees in Canada, and since labor costs are extremely lower in China, and since Bain Capital has a reputation for outsourcing, Canadians wanted to know if the iconic Canada Goose parka would be produced in...

some place other than Canada.

The CEO made a statement.

If you believe that public backlash will keep Canada Goose productions in Canada permanently, please remember that once-upon-a-time, Canada sold its most prized asset, Wayne Gretzky, to La La Land, US of A.

What do you make of this statement?  Thus far, the parka continues to be made in Canada, but now the hats are manufactured in China.

Principle:  anything that is repeated is important.

Principle:  the need to persuade weakens an assertion

Principle:  that which is in the negative is always important

Principle:  allowing for the possibility, within speech, contrary to the assertion, is also weak

Here is the statement again:

This statement came in December of 2013 and the parkas are still made in Canada.  Will it remain this way?
Peter Hyatt as Statement Analysis Blog at 9:32 AM

The word "important" implies valued but not required. And in all the partners and deal talk, I'd expect "They assured us..."

So, would the lack of commitment reflect his doubts about Bain? My read is he faught for assurances he didn't get, and was skeptical of how important "made in Canada" is to them.

The statement doesnt come right out and say where the coats will indeed be made. Or not made.

The goose is cooked and so is the statement.

OT-I have enjoyed the recent sexual assault analyses. They are both very lengthy articles, but I would love to see what you have to say about Jackie's statements about the alleged gang rape at UVA in the Rolling Stone expose, as well as the Washington Post article noting the discrepancies.

Anyone catch that the attack lasted 3 hours and she awoke to leave at 3 am?

Peter,
Are you going to do an analysis on the statement of Darren Wilson? I want to know the truth about what happened.

If I thought that it was going to change, I would not have done this deal.” ----- Trying to imply that the jackets are made in Canada, but really saying he likes the way things have been going because he can turn a really good profit.

I see a time in the near future where the tag on the jacket will read "Made in China" and an announcement along the lines of, "Due to economic considerations, we find it more cost-effective to produce our jackets in overseas factories. Rest assured we will maintain the quality and durability our customers have come to expect in our jackets."

Even with out SA the Goose Man's statement sounds like pure BS.

I have not found Darrin w Transcripts in copy paste form yet. Going over his statement indicates veracity, with sensitive portions where the victim taunted him.

This is particularly interesting because:

and the victim continued to come at him, including taunts.

That his life was in danger indicates truthfulness.

That some in the Grand Jury asked him why he did not run away, indicates the inability to think critically and understand what would happen should officers run in the face of physical threats.

I hope to get it published.

Here is a link I found that has all the documents including an interview with the detective and the the grand jury testament and more. After you open, there are tabs. If you click on Text at the top, you can copy & paste. When it opens, it looks blank with the names only. I had to scroll down to see the text and it is not next to the names.

So, Darren Wilson's statement shows he is being truthful about fearing for his life? And also that Michael Brown was trying to get his gun? Or hit him?

Peter,
Should I copy & paste the interview here? The interview with the detective is 18 pages.

"and the victim continued to come at him, including taunts."

This is what I noticed about Michael Brown's frame of mind that morning. Looking at Dorian Johnson's testimony, I believe Dorian knew they planned to steal from the store. He was just shocked how MB did it. Dorian Johnson testified that MB was face to face with the clerk, said "I want those", and reached behind the counter TWICE and took cigarillos. It was all as two clerks stood staring at him and he knew there was a store camera. He then shoved the clerk when he tried to stop him. Dorian Johnson further testified that MB carried the cigarillos in both hands walking down the center line of the street even though he had pockets. It was like he was asking for trouble or he thought he was invincible. It certainly was brazen and shows me he would hit a policeman.

I doubt it will be made in Canada much longer. It's been a year since the change of ownership, long enough for the new owners to say they gave it a go but its to expensive to keep making them in Canada.

YouTube is filled with actual footage of horrendous crimes. Only a fool would discount or ignore that sometimes the criminals wear badges. While the credibility of Dorian Johnson would require skepticism of his account, the credibility of the police officer should be viewed skeptically also, after all, the officer is the suspected perpetrator thus has great motivation to lie, deny, or conceal his actions. The officer was raised by a serial liar and criminal, so he probably knows how to lie very well, being trained so to speak in his formative years.