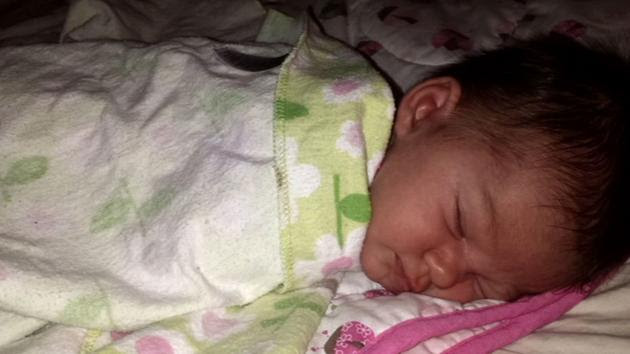 Here is an AP article with quotes analyzed.  Statement Analysis is in bold type.

A Newhall man has been charged with sexually abusing and killing his 19-day-old daughter, the Los Angeles County District Attorney's Office announced on Tuesday.Matthew Brendan Warner, 30, faces one count each of murder, assault on a child causing death, torture, oral copulation or sexual penetration with a child 10 years old or younger and aggravated sexual assault of a child, Deputy District Attorney Julie Kramer said in a news release.According to the criminal complaint, the murder and sexual assault happened on Friday.
Deputies with the Santa Clarita Valley Station said Warner and his girlfriend came to the station Friday night and reported their baby girl, Ellorah, missing from their home.Ellorah's body was discovered the next morning in the front cab of a Nissan pickup truck in a parking lot in the 23630 block of Newhall Avenue, about a half-mile from where the child lived. Warner was arrested on suspicion of murder.The baby's maternal grandmother, Nan Allison, said neighbors saw Warner leave their apartment complex with a bundle. She says he later told his girlfriend, Tawni Wallis, that their baby was missing. Wallis was not arrested and will likely not face any charges. Detectives say Wallis is distraught, but cooperating in the investigation. She left court Tuesday without speaking to the media. Allison, Wallis' mother, stopped to tell Eyewitness New what she would say to Warner. "I would tell him that when a man, but then I don't consider him a man, has a child he should be that child's protector until the day he as a father dies, and the idea that a three-week-old child should have to worry about defending herself against her 30-year-old father is abhorrent to me," Allison said.

What one says in the negative is important;  he is not a "man."  This is appropriate distancing language, though she began with him as a "man", which indicates that the relationship between them warrants further exploration.

The use of the word "child" if often used when the subject, herself, was abused in childhood  with 80% likely sexual abuse.

Next, note that a three week old child defending herself is "abhorrent", rather than incapable or impossible.  This is sometimes found in cases where the caretaker "failed to protect" due to her own upbringing.  It is not known if the subject, here, was a caretaker for the child.

If she was a caretaker:

For some, childhood sexual abuse can translate to:

a.  appropriate protection, with healthy understanding of the sexual abuse impact upon children.  This also stems from strong resolution of childhood sexual abuse by the adult.  (I do not believe 100% resolution or healing can exist.  See prior articles on sexual abuse and life long impact on the victims)

b.  hypervigilant protection --seeing threats where they do not exist; overly protective, controlling, hindering the child from "negotiating life" (linked to victims of bullying)

c.  inability to discern threat; clouded by one's own judgment;

d.  Neglect --a 'paralysis' of sorts, where the victim of childhood abuse knows, but does not react due to unresolved conflict.


The criminal complaint lists "revenge" as a motive for the alleged crimes. "I am not going to address that. It was behind closed doors. I have my opinions, but I am not going to say anything about that," Allison said. Warner's mother, Victoria Law-Thomson, says even though her son had a history of drug addiction she does not believe he would have done anything to harm his infant daughter. "I still believe in you. I just wish you'd reacted different. I think you made some really idiotic choices," Law-Thomson said.

The accused's mother uses the word "reacted" rather than "acted."  This should be considered in light of what Allison "did not" say, above, regarding revenge.  The subject (Law-Thompson) is telling us that something did, in fact, happen, so that her son "reacted" to what another did.  This is a very subtle justification or minimization (denial) of the accusations.  This is often found in the mothers of killers.  (See Carnel Chamberlain case analysis by searching the blog; especially the accused's mother's statements) The coroner has yet to determine an exact cause of death. Meanwhile, Allison says her daughter is "inconsolable.""I hope that every minute of the rest of his existence he is burdened with guilt over what he's done," Allison said. Warner was under post-release community supervision stemming from a 2012 conviction for unlawful driving or taking of a vehicle with priors. Arraignment was scheduled for Tuesday but was continued to Feb. 18. Bail was set at $2.25 million. If convicted of all charges, Warner faces a maximum penalty of life in prison.
Peter Hyatt as Statement Analysis Blog at 12:17 PM

Mr Gadd subsequently admitted responsibility for a "large number" of images - depicting a full range of sexual activity taking place between men and very young children - being on his computer.

In cross-examination, prosecutor John Price QC, asked the singer: "Why were you looking at pictures of men having sex with young children?"

Immediately breaking into sobs and reaching for a tissue, Mr Gadd replied: "I was in a very bad place in my life at that time and I had a lot of very serious decisions to make about my future."

He added that he had invested £200,000 in his own career, and that his record company and fans were demanding a lot from him.
'I was abused'

He said that at that stage in his life he was not able to empathise with the child victims of the indecent images that were found on his computer, but added that he now recognised the damage caused to the vulnerable youngsters.

He said: "I was abused as a child, so maybe I was trying to work my own feelings out.

In this trial, he is accused of attempting to rape and indecently assaulting a girl under the age of 13 in 1975.

He was quizzed about the allegation that the youngster was lying in bed with a friend when he attacked her.

But Mr Gadd said he had no recollection of the girl, asserting that he did not try to rape her and that he had no clue why she had made up the allegations.

"I can't say why anybody would dislike me," he told jurors. I did not try to rape her or any other child."

"I have absolutely racked my brains to wonder why she could say such a terrible thing."
'Accomplished liar'

The court heard that in the mid-1970s his management concocted a story that he was retiring "for love", something that the singer went along with in an effort to boost concert sales.

Jurors were told that in his 1999 autobiography, Mr Gadd described his involvement in the ruse as an "Oscar winning performance".

Mr Price said: "What each of these three ladies has told us is true, isn't it? And you, Mr Gadd, are an accomplished liar."

The singer firmly replied: "I am not a liar. I believe that I have told the truth all through this, all through my life actually."

He is also charged with four counts of indecent assault on a fan in 1977 at hotels in Leicester and Birmingham when she was aged 12 and 13; plying the same girl with alcohol, and having unlawful sexual intercourse with her.

Two further charges allege he indecently assaulted a girl of 13 on a date between October 1979 and December 1980, in his dressing room at a venue in Watford where he was performing.

The trial has been adjourned until Monday.

"I can't say why anybody would dislike me," he told jurors. I did not try to rape her or any other child."
Why can't he say?
Is it because he has a history both in the UK and Asia of paedophilia?

I want to understand the 80% better. Are you saying if someone uses the word "child" there's an 80% likelihood they were abused as a child? I'm finding that statistic hard to believe so maybe I misunderstand...? Any clarification or pointing to documented research is appreciated.

I know you're very busy and can't cover every OT posted. The golfer Robert Allenby's story of his alleged abduction has so many red flags and inconsistencies, i thought you may have covered it.

"I did not try to rape her or any other child."

Fascinating confessions from twins convicted of murdering their mother.
Pathetic interviewing techniques; reading these has proven to me that I'm definitely learning!
http://www.11alive.com/story/news/local/conyers/2014/05/15/jasmiyah-tasmiyah-whitehead-murder-case-part-4/9156033/

I thought the same about the golfer!

Would the inclusion of "doors" be noteworthy?