Freedom of Speech: 12 Dead In France 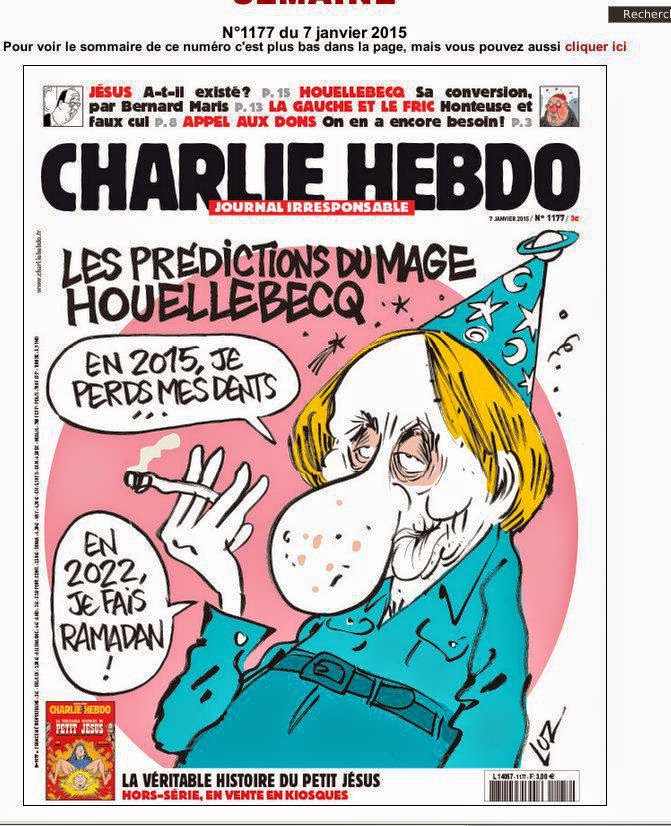 Protests over the shooting of a black man welding an ax at police has finally quieted down as the video of the black officer shooting him is now released.  Prior to this, protesters shouted "hands up" in the deception propagated in Ferguson, even though the shooter was the same color as the victim.  The NY Post uncovered shake downs by Al Sharpton, who had to be paid to not protest companies as "racists."

In Atlanta, a fire chief has been fired for authoring a book  on human sexuality.  He lost his job specifically for exercising his freedom of speech.  No toleration for him.

Europe has been "ahead" of the United States in squelching freedom of speech, something we once held not only dear, but worthy of fighting for.  They have embraced Islam, in spite of its intolerant teaching and practice including its subjugation of women, and have seen what Islamic meaning of freedom of speech means.  To complain about Islam's specific call for "order" is a "hate crime."

What was today's crime?

How did French police get into a shoot out with the killers only to have them all get away?

Police officers are being portrayed as racists,  and rather than lead the nation towards mending after Ferguson,  the White House announced that they were seeking federal charges after the Ferguson Grand Jury did not indict,  ignoring the rule of law and seeking ways to circumvent justice, just as has become the hallmark of this presidency, as laws of immigration have been demanded to be ignored, with the IRS becoming the pit bull used against dissidents.


The call for "toleration" of the intolerant continues, from the highest levels of government, while intolerance is shown to the Atlanta fire chief, or anyone who dares tie Mohammedanism with inherent pathological hatred of Jews and of violence.

We have become a divided nation.

The ACLU is silent about the fire chief of Atlanta.
The Al Sharptons said nothing about the ax wielding man shot...by a black police officer who's life was threatened
With unpopular topics labeled as "hate speech", Europe is engrossing itself in its own self-loathing.
Here, our police are, more and more, being portrayed as "the bad guys", as the President of the United States takes the lead, quickly followed by the justice department, and the mayor of NYC.

It will not lead to justice.

A black attorney wrote an "the most racist article"  that he feared to use his real name, for his own safety and that of his family.

Allen West took a gamble and re-posted it, though not a liberal:  http://allenbwest.com/2014/12/quite-possibly-racist-article-will-ever-read/

(use Statement Analysis on the article...see if a profile of the author emerges, and see if the author believes what he asserts).

Once we defended that which we disagreed with, but knew the right to free speech was the way our country was founded.

The portrayal of laws as optional at will, and law enforcement as inherently "bad", cannot help us in justice.

Freedom is something to be defended, not assaulted.

In Statement Analysis, we seek truth.  The principles applied are not different for one race than another.  We sought to learn if Police Officer Wilson told the truth, or whether or not Bill Cosby gave a reliable denial.

The principles are "color blind" in that they are evenly applied.  Police officers do not want, nor need racists tainting their reputations and professions.  I did not receive a single negative email about my analysis of Chief McCollum's shooting of his wife.  There is no "pass" in Statement Analysis for profession, or for political affiliation. Men and women of all stripes commit crimes and are deceptive and the principles used in one are the principles used in all.

They were killed for freedom of speech.  France says that they have identified some of the shooters.  Let's hope for justice.

update: The White House is "questioning the judgment" of the French magazine for publishing cartoons.

these types of attention getting terrorist type crimes make me very suspicious. i think it's always worth considering that it could be a third party, somebody who gains from casting blame and inflaming conflict.

conspiracy is a real thing. sometimes things are exactly as they seem but often they are not.

The White House is "questioning the judgment" of the French magazine for publishing cartoons.

Quoting
"...these types of attention getting terrorist type crimes make me very suspicious. i think it's always worth considering that it could be a third party, somebody who gains from casting blame and inflaming conflict."

Exactly. We have seen far too many false flags to react uncritically to any major incident reported by MSM.

Well said Peter although Ihave to disagree that we in Europe have embraced Islam. Unfortunately the common man's opinion is routinely overlooked when it comes to tolerating the intolerant. Although the majority of Europeans have grown up in a predominantly Christian culture, its values are increasingly being undermined in case they are deemed offensive to the minorities. More and more concessions are made but to the extremist mind they are will never be enough. They are not hiding their intention which is the islamization of Europe yet we are forcibly made to submit incrementally to their demands. I acknowledge that there are huge problems in integration in France particularly. For many integration is undesirable for the reason that the host culture and the immigrant culture are mutually hostile. Loss of border controls, mass muslim immigration lack of a cohesive plan for integration, a moribund economy and historical and current hostilities between the ex colonial power and is former subjects create all the conditions for the murderous rage unleashed in Paris yesterday. Our European way of life is inherently insulting to the stone age mindset. Therefore they will continue to justify their MO of slaughtering the infidels.

bho is backhandedly defending his bretheren,
Just wait, it's gonna get worse.
Right now, and in his speech to the UN previously, he has been dissing the french magazine but using language that's somewhat confusing.
There are not enough cartoonists here in the United States who use both muslims and bho in derogatory depictions. Why not, I wonder?