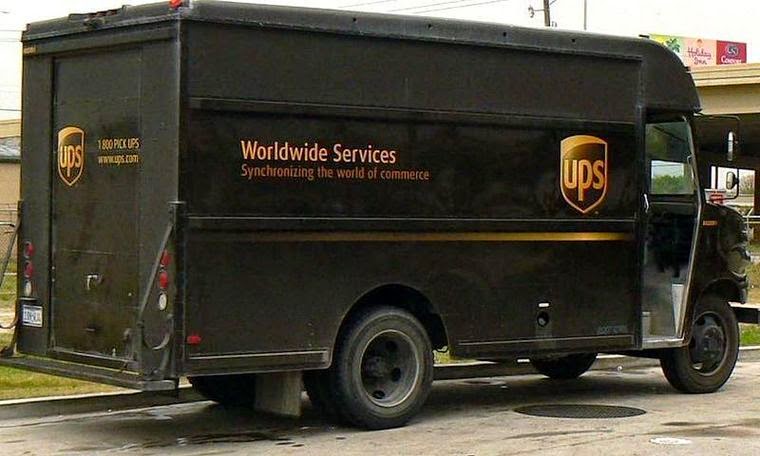 From www.myhorrynews.com:
A UPS driver was robbed while making deliveries in Conway Tuesday afternoon, according to the Conway Police Department.
Police spokeswoman Lt. Selena Small said police were sent to a report of an armed robbery in the area of Forest Loop Road in Conway around 4:30 p.m. Tuesday.
“Upon arrival officers met with a UPS delivery driver and he advised officers that three black males approached him and they were armed with handguns. They robbed the victim of several items and then fled the scene on foot,” Small states in a press release.


Anyone with any additional information on this incident is asked to call the Conway Police Department at 843-248-1790.
Peter Hyatt as Statement Analysis Blog at 5:12 PM

Three is the number that liars use most often.

This sounds like police "speak". I am basing this upon the use of the following words: arrival, advised, approached. armed, and fled. This sounds like the vocabulary of police officers. It isn't direct quotes from the driver.

Where in the heck is Conway????? Is Conway a suburb of some city? If so, what City? What county, what state?

I just hate when this happens. Like everybody in the country knows where Conway is!!!

why are 99% of robberies by blacks?or reportedly by blacks?

"At about 4:30 p.m. Tuesday, officers responded to a report of a robbery near Forest Loop Road in Conway. On arrival, a UPS driver told officers that three men armed with handguns approached him and robbed him of several items before fleeing the scene on foot."

I'd expect more of a "be on the lookout" statement than that. I'd want to ask the driver questions about the "several items" which seems vague.

Is this why they closed that interstate?

I wonder what items were taken, obviously they had to be small and portable possibly phones or laptops.

Will we be seeing generic bushy haired stranger descriptions?

Do the vans have cctv?
What about cctv in the area?

Tania .... do you work for the police?you have an insight thats good :)

Hobnob......You have heard a lot of questions, which attribute lies to the accused. You will make up your own mind about whether he was telling lies and if he was, whether he was doing so deliberately. It is for you to decide what significance those suggested lies have in relation to the issues in the case but I give you this warning: do not follow a process of reasoning to the effect that just because a person is shown to have told a lie about something, that is evidence of guilt,so get your FACTS right.

Small states in a press release.

exactly Maggie, the UPS driver was probably selling drugs, but the deal went bad and they took his dope without paying.

armed with guns ....I agree with Maggie and You!They are nasty animals.

There is a dog on the Cctv...if you watch carefully.,.,the thief stop's// and makes a surprise expression at the dog and see's he responds. Chances are he or she will/did stop, look at him and appear to be hesitant. Yes, dogs pick up on our emotions, too.

With the introduction if texting, and the language and vernacular that comes with it, does this alter the way in which we speak.

Meaning, I often find myself dropping a pronoun while I am texting because it is faster. Since communication now days is a series of symbols, unidentifiable acronyms, chirps, tweets, sentence fragments, and informal emails; wouldn't this change, in written dialogue, emit in our oral communications as well?

not all pedophiles are gay.

I'm curious why you plucked this story out. It doesn't seem like much of a story or analysis. Conway (which, BTW, is in SC 14 miles from Myrtle Beach, and my childhood home) seems like a random, non-important place to find a story about. Just curious!!

Can you analyze Bill Bellickick's press conference today? That is, if he speaks lol. Does his normal speech pattern need to be taken into consideration?

Your texts would have to be analyzed, as a whole. If you consistently drop a certain pronoun, or abbreviate certain words, then it would be noted when you DON'T do so, and vice versa. - That's what I've read here anyway. I, personally, don't find any particular rhyme or reason to even my own texts though. I usually don't use abbreviations or drop pronouns, unless I'm in a big rush, or the text starts to get long and then I'll even switch to abbreviations mid-text. That's why I find analyzing others texts/social media difficult. If someone was to analyze my texts, I could plainly say, well I was in a rush. Without me saying so, I guess it would appear that I was abbreviating for some subconscious, note worthy reason.

Peter, any SA on the statements by Alan Dershowitz regarding sex with minors allegations?

Could you please provide statement analysis on Bellichick and Brady's comments regarding "deflategate"?

"Three" means that the robbers were also liars.

Here are statements from Belichick and Brady:

New England Patriots Coach Bill Belichick declined to block for his star quarterback at a Thursday news conference he called to discuss the spiraling scandal involving deflated footballs in the AFC championship game that put his team in the Super Bowl.

The famously tight-lipped coach said he – like fans everywhere – only learned about the intricacies of pigskin air pressure this week, after the NFL announced the Patriots used illegally underinflated balls in the game, played in Foxboro, Mass., in bad weather.

“I think we all know that quarterbacks, kickers and specialists have certain preferences,” Belichick said. “Tom’s personal preferences on footballs are something he can talk about.”

Critics say the team, which has been accused of cheating before, may have benefited in the 45-7 blowout of the Indianapolis Colts by using softer footballs that may have been easier to throw and catch in the rain. In the NFL, game balls are tested prior to kickoff to ensure air pressure is between 12.5 and 13.5 pounds per square inch, but then each team manages them during the contest.

Eleven of the 12 balls the Patriots used were found to be below the bottom of the range, and the NFL is investigating.

“When I came in Monday morning, I was shocked to learn of the reports about the footballs,” Belichick said. “I had no knowledge of the various steps involved in the game balls and the process it went through and what happened. So I learned a lot about that.”

Asked if he had talked to Brady about what is being called “Deflate-gate,” Belichick simply said, “I have no explanation for what happened” before cutting the morning news conference off.

Brady is scheduled to address the subject from Foxboro at 3:45 p.m. ET. He has not spoken about it since Monday, when he said on a regular appearance on the New England radio station WEEI that the reports were "ridiculous."

"I think I've heard it all at this point," Brady said. "That's the least of my worries. I don't even respond to stuff like this."

But that was before the NFL confirmed that the balls were underinflated, and possibly tampered with. Brady likely will be forced to talk to NFL investigators, who are taking the matter seriously ahead of the sport’s biggest game on Feb. 1. The scandal has already cast a shadow over the event, partly because it involves a team that has cheated before.

The Patriots were penalized a first-round draft pick, fined $250,000 and Belichick was personally fined $500,000 after an investigation by the NFL determined the team had illegally videotaped their opponents' hand signals during a 2007 game.

And unsubstantiated accusations of cheating have long dogged the team, stemming from their Super Bowl wins in 2002, 2004 and 2005. The St. Louis Rams claimed the team illegally videotaped their walk-through practices prior to the 2002 game, and players on the other defeated opponents have said the Patriots seemed to have inside knowledge of their playbooks.

According to NFL rules, home teams are required to provide 36 balls for outdoor games and make the balls available for testing with a pressure gauge prior to the game. Belichick pledged to cooperate with the league investigation, but insisted that he is clean.

“I have never talked to any player, staff member about football air pressure,” he said. “That is not a subject that I have ever brought up.”

While Belichick insisted he knew nothing about air pressure and game balls, he did display extensive knowledge of preparing the pigskin for practice, saying he deliberately made footballs hard for his team to handle.

“My personal coaching philosophy, my mentality, has always been to make things as difficult as possible for players in practice,” Belichick said, explaining that he has his team work with wet, sticky, slippery balls in practice. ”However bad we can make them, I make them.

“We never use the condition of the football as an excuse,” he added. “We play and we kick with whatever we have to use.”

The media is saying that he threw Tom Brady under the bus. I don't think he did. The one thing he deferred to him was his personal preference on the balls. How could he really answer that for him? He said that TB could answer that better than he could.

I really hope Peter can analyze these statements, I think I'm too much of a fan to be absolutely fair in an attempt to analyze. I believed Bellichick's statements, because he blatantly said numerous times that he doesn't know anything about it, but obviously people are thinking he's a liar because he kept saying it (like a "I don't know nothing" excuse), so I don't know what to think.

Anon, Pay attention to exactly what Belicheck says he has no knowledge of.

Tom Brady: ‘I Didn’t Alter The Ball In Any Way’

Just a snip it of Brady's statement:

“I didn’t have any … I didn’t alter the ball in any way,” Brady said. “I have a process that I go through every game, and I pick the footballs that I want to use for the game. Our equipment guys do a great job of breaking the balls in, they have a process that they go through. When I picked those footballs out, at that point, to me they were perfect. I don’t want anyone touching the balls after that, I don’t want anyone rubbing them, putting any air in them, taking any air out. To me those balls are perfect and that’s what I expect when I show up on the field.”

Brady was asked point-blank if he’s a cheater.

“I don’t believe so,” Brady said. “I feel like I’ve always played within the rules. I would never do anything to break the rules.”

I don't think I can try SA on this because it's hearsay. I am nervous to even try. I never instructions yet on how to do it.

Please analyze Tom Brady's statements. One red flag: "I don't believe so," in response to whether o not he is a cheater.