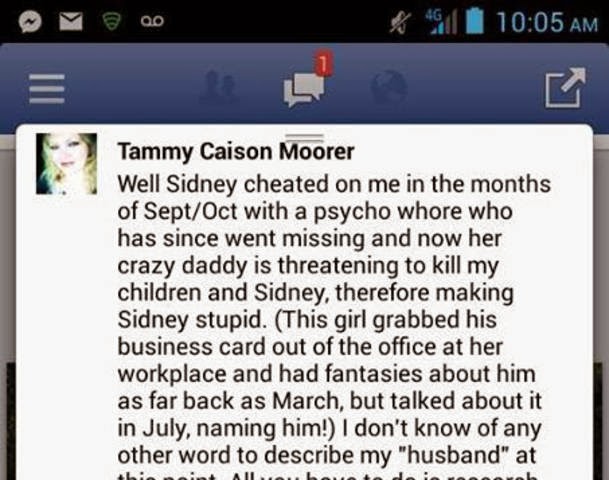 The reason is singular.

Recently, a 16 year old girl went missing.  She met up with a 31 year old male, of whom she met online.  He posted a picture of them, together, on Facebook.  They were found and he was arrested.

Several young thugs stole $5000 and broke into a car, took out an iPad, and recorded themselves boasting and flashing the money before the camera. They were boasting of their "one night's work" reward of cash.

They were soon after posing for mug shots.

We are communicative creatures.  We have been created to communicate.  When we do not communicate, we go insane.

This is key to not only Statement Analysis, but it is key in Interviewing and in Investigation.

When I am asked to interview someone of whom investigators believe "did it", I always tell the team the same thing:

"I will get the information you seek.  He will tell me everything we want to know."

This is not an infomercial or a confidence booster.  It is not me bragging.

It is a fact of human nature.

The person sitting across the table from me, who "did it", wants to tell me what he did.  He does not like the pressure on his brain to not tell me, and he does not want to lie outright.  Over the years, my faith in this facet of the Statement Analysis system has steadfastly grown.  Even while being deceptive, the worse case scenario that I have ever encountered is this:

The subject did not lie to me, but withheld the key points of information.

In doing so, he will give linguistic signals of suppressed information.  His words, however, even without the critical information, will guide me.

I have confidence that not only does he want to talk, but he has a biological need to talk.  We all do.

I have just as much confidence that when he talks, and he suppresses or withholds the critical information, he will both:
a.  Give signals of withholding information
b.  Use specific words that will guide me to the truth.

In law enforcement seminars, this is where I begin.  I state that a person can barely lie, and how rare it is.

Most will struggle to believe me, having been lied to over and over, on the street, in interviews, on traffic stops and so on.  But when they learn that the outright lies are almost non-existent and that deception comes from withheld information, they realize that:

and that lie detection is not magic, but it is hard work, some are willing to go the extra mile, and put in not only the effort of learning, but the bigger effort:

Criminals post on Facebook and other areas because they have a biological need to communicate.  The one thing that none of us is able to resist is talking about what we did.

If you find someone reluctant to speak, ask him or her to tell you what they did today.

They will have a hard time resisting.

In the above photo, Tammy Moorer posted a hateful rant against victim, Heather Elvis.  This form of open hatred of the victim by the alleged perpetrator is 'against the odds' in Statement Analysis.  We most always find subtle words of hatred by the guilty, and not such open defiance.  Although we deal in percentages and expectations, this post is a reminder that the odds of even 90%, still mean that the 10% can be encountered.  It is the exception.

Principle is not established on exception.  The 'norm' is for the perpetrator to find more subtle ways of blaming the victim.  In Tammy Moorer's case, we are looking at a sociopath, as revealed in her statements in the press, calloused nature towards the victim, as well as the many other narcissistic posts she has made to various social media.

In the case of Cynthia Witlatch, the Seattle police did nothing about her falsely arrested the 70 year old male, who spend a night in jail.  He is a vet, and has no record.

It was only when she posted on Facebook that Seattle police took action.

So the motto for SA should be:

Everyone loves to speak.

I still wonder about whether it is true that he may have swung the golf club earlier. It may or may not have been swung at her and it doesn't appear on the tape. I did look at the two places on the tape where one poster said something could be seen. I couldn't see anything going on. But, that does not mean that it didn't happen.
If it did happen, whether he was swinging it at her or not, why didn't he just put the golf club down? Isn't that what most innocent people would do when told to do something by an officer? He was belligerent. He may be completely innocent of swinging his golf club at her but that doesn't excuse being belligerent and sort of "picking a fight" instead of just complying with her simple request.
We can't know where it would have gone if he had put it down but it sure seems to me that at the outcome would have been better.
it seems to me that his attitude towards her confirmed her perception of him doing something disrespectful such as swinging a golf club as she simply rode by.

They use it to garner support and to browbeat those seeking justice by getting their 'supporters' to harrass, demean. defame, threaten anyone who doesn't buy the innocent of the crime claims, even when it is clear they are guilty, they were caught in the act, caught on media or admitted their guilt openly and freely in court(jodi arias is a prime exampe with her supporters still claiming she didn't do it even when in free testimony away from the media she admitted murder as seen in the unsealed testimony of the secret witness)

Others use it as a way to get money and freebies(mccanns)
They know they are guilty but still create funds to get as much money as they can before the guilty verdict.
Using the money for legal fees disguised as hiring PI's or even openly as a fighting fund, making the most of the free time they have with fine dining and holidays.

Other use it s a nest egg for when they are released knowing they cannot profit from their crime once found guilty in certain countries.

Some do it to go out in a blaze of glory, they are nobodies in real life, they make themselves somebody online and then go out and commit crimes.(charlie rogers)

I think the claim of everybody loves a bad guy does ring true in some cases.
If they are attractive it helps.
They know how to play on peoples emotions which is why so many murders get marriage proposals ( it's a safe marriage since usually the perp is in jail for life and will never get out to live a normal married life)

Some are simply just dumb.
They think only their friends will see their posts and get a shock when LE turn up bearing shiny bracelets.

Social media is another way of talking, easing the stress of guilt.
They aren't taking to a person who can spill the beans, they are talking to an inanimate object who will never talk, like a pet or a favorite comforter.
They are talking to their keyboard, to their monitor almost like a journal relieving the stress, forgetting that their 'journal' is more often than not open to the public eye.
They talked to an inanimate object (keyboard/monitor) whilst it is animated and 'live' connected to the worldwide web a living breathing entity.
It would be like confessing down the phone, you talk to an inanimate object (distancing) whilst at the same time talking to a live person(close)

People love to talk as i have found out over the years, watching the world pass by as i take a rest and chat to strangers as they also take a rest.
Sitting on a bus and striking up a conversation, heck even a wrong number ( a lady misdialed and we ended up chatting for hours as she talked about her pets health, her marriage problems and debt issues, i advised her on where to go for help and general how to)

If you take time to listen and show interest and i mean listen not pretend listen or interet, then people will open up to you.

Sometimes i think people, strangers talk to me because i listen, i don't judge, i am fascinated (really, people fascinate me), i stay impartial and i am unshockable.
It is easier for them to discuss things with someone they will likely never see again than it is to discuss it with family or friends.

"it seems to me that his attitude towards her confirmed her perception of him doing something disrespectful such as swinging a golf club as she simply rode by."

You have a good point but I think this officer used this man's unwillingness to put down the golf club as a perfect opportunity to lie about swinging the golf club at her. It was a split second decision on her part. She saw the chance and took it. She was counting on people to see his behavior as stubborn and contentious which would make her lie more believable or even okay. Maybe in her own skewed mind she believed her lie was justified because he was not doing what she asked.

I haven't followed this case as closely as some others and have never figured what the indecent exposure is about. I see it's claimed it is related but I thought it had to do with what they were doing before Heather went to the docks. How is it related?

Also, what about the words "has since" in "has since went missing"? It's not direct, but does it seem to be a bridge and subtly imply a relationship between her affair with Sidney and her going missing? "Since" seems like an extra word and I'm curious why she used it. Or is it used to create distance between the two things?