Please note the quotes within the article from Bangornews.com, with analysis in bold type added.

When an attorney believes his client's innocence or guilt, it comes out in the attorney's own words.  Here, we learn what attorney Stephen Smith believed about Nichole Cable's murder by his client, Kyle Dube.

Also note that in his written versions, one of them, when left UNEDITED by the Bangor Daily News, does have truthful sentences within it, which can tell us what happened.  Other accounts show dropped pronouns and present tense language and are deceptive.  In spite of reporting by BDN, he did not claim to "prank" her, only he intended to "prank" her.  This is interpretive reporting rather than factual recounting of his statement.  They interpreted his words but did not listen, nor accurately quote him. 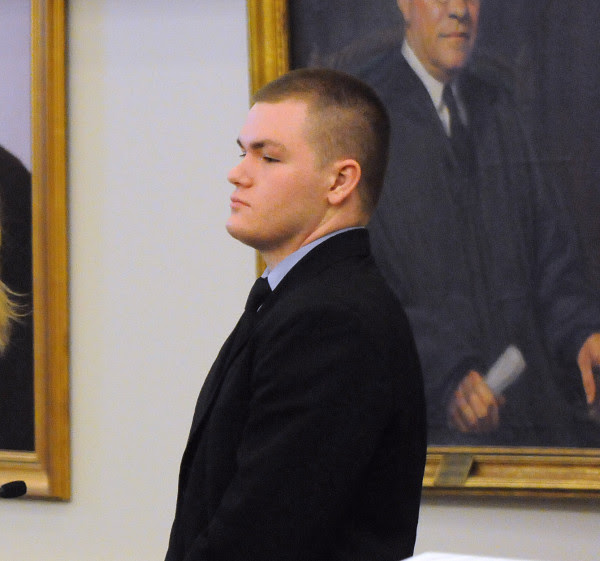 BANGOR, Maine — A jury took just 45 minutes to find a man accused of using Facebook to lure 15-year-old Nichole Cable to her death nearly two years ago guilty of murder and kidnapping after nine days of testimony at the Penobscot Judicial Center.
Kyle Dube, 21, of Orono was accused of using Facebook to lure Cable out of her mother’s home in Glenburn nearly two years ago by using the identity of Bryan Butterfield, a boy his girlfriend had dated, then killing Cable in an abduction gone wrong.
He did not react when the verdict was read but his mother, brother and other relatives wept as he was led from the courtroom.
Cable’s family and friends also cried and hugged each other as the verdict sunk in.
Members of Cable’s and Dube’s families declined to speak with the medias about the verdict.
Superior Court Justice Ann Murray ordered that Dube continue to be held without bail while awaiting sentencing. A sentencing date has not been set.
In closing arguments Friday morning, Assistant Attorney General Leane Zainea, who is prosecuting the case, said that all the evidence showed that “Kyle Dube and only Kyle Dube kidnapped and murdered Nichole Cable.”
Dube’s DNA was found on a hat and sock discovered at the end of the road where Cable’s mother lived, the prosecutor said. It also was found under Cable’s fingernails.
Defense attorney Stephen Smith of Augusta told the jurors that Dube had no motive to kill Cable because the two were friends and lovers and he never confessed. Smith said that Dube’s ex-girlfriend, Sarah Mersinger, now 18, of Glenburn “hated Nichole Cable” and had access to Kyle Dube’s phone and computer.
“Kyle had no motive, very little opportunity and there’s a perfectly viable suspect who had all those things.  There was no reason, none, zero, for Kyle to kill Nichole. That’s reasonable doubt.”

Please note that the attorney, Stephen Smith said that no reason to kill is "reasonable doubt."
Does he believe this?
Let's look at his quote:
“Kyle had no motive, very little opportunity and there’s a perfectly viable suspect who had all those things.  There was no reason, none, zero, for Kyle to kill Nichole. That’s reasonable doubt.”
Please note that Kyle had "no" motive; in the negative.  This is to avoid saying "Kyle didn't have a motive", which indicates that the subject may know the motive.
Note that he does not deny his client's actions, only allowing for "very little" opportunity.  This indicates a belief that opportunity did exist.
Note that the other "suspect" was not considered a "suspect" except to the subject who then qualified her as not only a "viable" suspect (indicating that there may be a suspect not viable), but "perfectly" viable.
Now, let's look at his "denial."
A reliable denial which would show the subject's belief in his client's innocence would have been:  "Kyle didn't kill Nichole."
Instead, he says "no reason", with emphasis, as "none", and "zero", which indicates deception.
Finally, he uses the word "that", instead of "this", which distances himself from the statement.
Analysis conclusion:  the subject is deceptive and knows that his client killed Nichole, just as his written confession indicated.
He has pleaded not guilty to kidnapping and murder in the May 12, 2013, death of the Old Town High School student. He allegedly planned to kidnap the girl, hide her, then find her and play the hero.
In two recorded interviews with Maine State Police detectives played for the jury last week and Wednesday, Dube repeatedly denied having anything to do with Cable’s disappearance, but he gave a fellow inmate a written confession shown to jurors Thursday.
Zainea told jurors that only the killer could have known the details, including a diagram of the area near Cable’s mother’s home where the girl was kidnapped, that were outlined in Dube’s handwritten confession.
“The information about how her fingernails had been scraped by her killer was never released to the press,” Zainea told the jury. “In the confession, Mr. Dube wrote and drew a picture of how he did that.”
Smith said that in the letters Dube wrote to inmate Scott Ford, Dube tried to protect his girlfriend.
“I’ll never try and put this on Sarah,” Dube wrote. “I don’t care if she is with someone else or not. It’s my problem, not hers.”
Jurors must first consider the murder charge, the judge told them. If they find Dube is not guilty of murder, the jury may consider manslaughter.
If the jury finds Dube caused Cable’s death intentionally or knowingly or with depraved indifference, then he is guilty of murder, Murray said. If Dube acted recklessly or with criminal negligence in causing Cable’s death, then he would be guilty of manslaughter.
After considering the murder charge, jurors should consider the kidnapping charge, the judge said.
Dube faces between 25 years and life in prison on the murder charge. He faces up to 30 years in prison on the kidnapping charge.
Murray could sentence Dube to serve sentences consecutively instead of at the same time.
Peter Hyatt as Statement Analysis Blog at 4:21 PM

Sick world~to explain how a person removes dna from under the nail must be a daunting task. Perhaps a CSI fan?

Posing as another to lure and murder is becoming the norm. Or, maybe it's always has been?