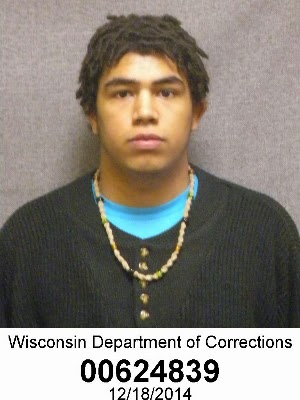 A Madison, Wisconsin police officer fatally shot Tony Robinson, 19, in what police report as a response to a 911 call about a man who had assaulted a victim, and was dodging cars in traffic.

According to the police report, the officer followed the suspect into an apartment, where the man is alleged to have struck the officer in the head, knocking him to the ground.  During the struggle, officer Matthew Kenny fatally shot the suspect.

His mother, Andrea Irwin, said, “My son has never been a violent person. And to die in such a violent, violent way, it baffles me.”

Remember, her brain signaled her tongue what words to say in less than a microsecond.

The brain did not say:

She used "has never been" as her verb choice.

"My son has never been a violent person."

Then, we notice a word repeated:

"My son has never been a violent person.  And to die in such a violent, violent, way, it baffles me."

The word "person" from a mother should cause interviewers to explore the relationship she had with her son.

This has also the word "violent" used three times, making it sensitive to her.  What has caused this sensitivity?

The media article ended without further information.  The Smoking Gun (TSM) obtained a prior police report and released it.


The 19 year old was on 3 years probation for armed home invasion after pleading guilty.  A home invasion is considered one of the most frightening of crimes.  This means he pled guilty to breaking into someone's home, with deadly force.  It is considered one of the most intrusive, stress causing violent moments possible in robbery, often done while the inhabitants are either asleep, or awake, yet always with the expectation of "home", with "peace, security", (etc) often taken from them, for the rest of their lives.

A home invasion's violent element can impact victims for the rest of their lives, leaving them unable to ever feel safe again.


On his Twitter account, Robinson yesterday included a link to a story about the scathing Department of Justice probe into the Ferguson, Missouri police department. On Thursday, he tweeted, “I need a bae to take care of me when I'm off the drugs.” In other tweets, the teen--whose handle included the name “Tony Montana”--frequently referred to marijuana and described himself as a “Real nigga from the start till the casket shut.” Last June, Robinson made reference to the ankle monitor he was outfitted with after being released on bond in the armed robbery case. “Big bro wants me to come to new york and live with him after my bracelet comes off, hey why not,” he wrote.
In posts this year to his Facebook page, Robinson appeared troubled, writing, “I hate my mind” and “I don’t need help im not crazy.” In a January 19 post, he declared, “My soul is dying.” In a series of messages on February 11, Robinson wrote, “You arent shit to your family when you grow up,” and “Iv been getting lied to my whole life… Mostly by famliy members.” In December, a day after linking to a video showing a police officer applying a chokehold to a man, Robinson wrote, “The only thing cops are getting trained for is to shoot first and ask questions later.”
Peter Hyatt as Statement Analysis Blog at 10:55 AM

I copied this quote from CNN while reading on this incident.
"Some of the protestors were members of the Young, Gifted and Bkack Coalition that was formed last summer after the Michael Brown shooting in Ferguson. The group wants more REACTIVE policing in African American neighborhoods, said group member Brandi Grayson. She said Madison police park on street corners in African-American neighborhoods AND WAIT FOR SOMETHING TO HAPPEN, which leads to residents being hassled."

Say what? There were at least two, maybe more 911 calls that Tony Robinson hit and then strangled someone. Good thing police were there to REACT. Good thing an officer was just WAITING FOR SOMETHING TO HAPPEN so he could HASSLE the community.

Apparently armed robbery does not make her son a violent person.
What then is her definition of violent?

What would she be saying if he had killed someone either in the armed robbery or in his last escapade?

PTC Police Chief To Be Indicted

WSB reported Friday that Griffin Judicial Circuit District Attorney Scott Ballard has announced he will seek an indictment against McCollom. The police chief reportedly will be indicted for reckless conduct, a misdemeanor offense.

Some people (most actually) do not consider a crime violent unless there is alot of blood or someone is dead.

Growing up, I lived in a violent household. I distinctly remember my mother telling me and my brother that his dad was a bad man and very violent. We were hiding on the side of a house, on the old style driveway with the strip of grass down the middle. It was dark and cold and we were hungry and scared. My brother's father threatened to kill her because she had "dated" a competing drug dealer. (Dated means had sex with, he always said dated though. It was really strange)

We grew up watching him beat other men my mother "dated". She always excused his behavior UNTIL he beat her and then us.

I wonder if that is his mother's criteria for being violent? That he's not violent because he didn't turn it on her.

"...hiding on the side of the house? (in front of a window?)...it was dark and cold and we were hungry and scared...(the abuser was chomping on the pizza you just ordered I presume).

(Observation: people who remember things distinctly do not remember them at all).

You, like Peter Townsend, are imagining how this man's death could be twisted to create your own twisted childhood.

There are many things I remember quite distinctly. Thank God I do!

Ref the death of Tony Robinson; it is difficult for a mother to lose a son, particularly one who has been living at home with her all or most of his life regardless of his age or the circumstances surrounding his death.

I have sympathy for this mother, living with and watching her son's struggles and her many heartaches, now having to cope with the unfortunate loss of his life; but she needs to admit that her son was not only violent in his past actions and crimes, as well as in his present ones, but in all likelihood would have continued to be, and perhaps even more violent in time to come.

Sometimes a bad seed is just that; a bad seed, or perhaps he had suffered some sort of brain trauma earlier on in his young life, or inherited bad genes from the family pool. Sorry mother, but it happens. It doesn't mean that we love them any less. Denial does not ease the pain. The pain cuts deep and it does not end. My condolences for your loss.

Ex Army Chief Lord Brammall 'mystified' by police search of his house.....by the Mets Operation Midland, investigating abuse in London in the 70's and 80's

Maybe, he becomes a "person" when she is thinking he is on drugs.

I did NOT read the Twitter response until after I posted the above paragraph. If I as a reader suspected drug use, it's possible his own mother would suspect it as well, but maybe he denied it to her even though her gut told her something else. As parents, haven't we experienced wanting to believe our children but knowing better but not having proof. He may also be a "person" because his actions in court were not from the son she raised. Drugs probably played a big part in his life.

I just googled for other responses from his mother and I don't see anything that says she is denying or defending his actions. Only that she is baffled and most likely mortified by his actions and of course the entire event. I am assuming his probation was from at least one year ago, but he didn't live at home (I'm assuming) and probably denied everything to his mother. Which isn't to say she believed him, but she is disappointed in his behavior but she can't control him, he is/was an adult.